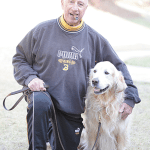 By June Mathews For 31 summers, from 1986 through 2016, Preston Goldfarb went to soccer camp. Not only did he go to camp, he daily directed, showed up hours early to prepare for, and taught at camp. But he had a reason – a very good one, in his opinion – that made it all worthwhile. “I wanted to expose children to what I thought was the correct way to play the game, the way … END_OF_DOCUMENT_TOKEN_TO_BE_REPLACED

By Emily Williams Andy and Jan Thrower received news on Jan. 6, 2009, that no parent wants to hear. Their son Anderson had been diagnosed with acute lymphoblastic leukemia. Their struggles seeing their son through cancer treatment, along with raising their daughter, led the Throwers to an opportunity to help other families navigate the maze of pediatric cancer. As a result, … END_OF_DOCUMENT_TOKEN_TO_BE_REPLACED

By Lee Davis Bill Bowron really wasn’t thinking of sponsoring one of America’s top youth tournaments when he first became interested in soccer a little more than two decades ago. The motive was much simpler. “My son was a very active little boy and we wanted to find a team sport in which he could channel all that energy,” said Bowron, the chairman, CEO and president of Red … END_OF_DOCUMENT_TOKEN_TO_BE_REPLACED

By Lee Davis Throughout the history of sports, it’s easy to find cases where it was difficult for a new coach to follow a successful predecessor. That’s not the case with Vestavia Hills wrestling. Steve Gaydosh led the Rebels to 14 state championships before retiring at the end of the 2016 season. Former Vestavia wrestler Monterrious “Tee” Adams, who was coaching at … END_OF_DOCUMENT_TOKEN_TO_BE_REPLACED

By Emily Williams Three local churches are teaming up with Alabama Possible, a statewide organization that works to help impoverished members of the community succeed, to participate in a Community Action Poverty Simulation. Independent Presbyterian Church will host a simulation that educates participants on the struggles people living below the poverty line face every day. … END_OF_DOCUMENT_TOKEN_TO_BE_REPLACED