By Lee Davis By any measure, 2017 was a golden season for Over the Mountain baseball. Briarwood, Homewood and Oak Mountain produced outstanding seasons. Vestavia Hills had a strong April-May push that nearly put it in the Class 7A championship finals, and Hoover brought home the big blue trophy, emblematic of the 2017 state title. As a result, the 2017 All-Over the Mountain … END_OF_DOCUMENT_TOKEN_TO_BE_REPLACED 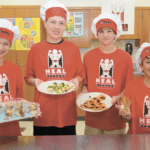 By Emily Williams Vestavia Hills-based organization Heal Inc. has unveiled a new program that supports its mission to teach children how to live a healthy lifestyle. Throughout the school year, teacher Kendall Kennedy’s family and consumer science classes at Louis Pizitz Middle School in Vestavia Hills participated in lessons on healthy eating, and they put what they learned … END_OF_DOCUMENT_TOKEN_TO_BE_REPLACED

By Donna Cornelius Watch Madison Murphy navigate Whole Foods Market, and you’ll see a supermarket specialist at work. Murphy started Full Pantry, a boutique grocery store shopping and delivery service, in January 2016. A year and a half later, the 24-year-old has a customer base that includes singles, young married couples and even one family with 10 children. “I thought I … END_OF_DOCUMENT_TOKEN_TO_BE_REPLACED

By Sarah Kuper On June 11, Studio by the Tracks will present its 28th Art from the Heart event benefiting arts programming for adults with autism spectrum disorders and emotionally conflicted children. In past years, the art auction has been held at B&A Warehouse near Railroad Park. But Executive Director Suzanne Boozer said the event needed a change of venue for … END_OF_DOCUMENT_TOKEN_TO_BE_REPLACED

By Sarah Kuper When Marsha Vickers’ family gets together at their Lake Martin vacation house, she has one word to describe it: “It is wild. And we just love it that way.” Marsha and Owen Vickers’ four children plus spouses and grandchildren make every summer weekend full of family fun and memories. Children and grandchildren start arriving at the house when everyone gets off … END_OF_DOCUMENT_TOKEN_TO_BE_REPLACED