Grace Carr doesn’t mind being compared to her older sister, Sara. In fact, she rather enjoys it.

“I like having her as an older sister,” Grace Carr said. “She’s a good role model. She set an example of working hard, coming in and committing yourself and having a passion for your sport.”

As an outside hitter, Sara Carr led Mountain Brook to consecutive volleyball state championships in 2014 and 2015, winning MVP of the state tournament in both years. She also set basketball program records in career rebounds, points in a season, rebounds in a season and points in a game.

Sara Carr is now a junior at Emory University in Atlanta, continuing to excel on the volleyball court. As a sophomore in 2017, she helped lead Emory to the NCAA Division III quarterfinals and was a first-team All-American.

Grace Carr is a junior outside hitter at Mountain Brook and had a dominant season this fall for the Spartans. She recorded 599 kills, 445 digs, 46 blocks and 71 aces, leading Mountain Brook to another appearance in the Elite Eight ASHAA State Volleyball Tournament. Mountain Brook lost to McGill-Toolen in the Class 7A semifinals to finish 46-11.

“She had a phenomenal season,” Mountain Brook coach Vickie Nichols said of Grace Carr. “She became a solid player, the most consistent she’s ever played, and we saw many glimpses of her leadership ability.”

For her outstanding season, Grace Carr earned the 2018 Over the Mountain Journal Player of the Year honor in a vote of local volleyball coaches.

Vestavia HIlls’ Mandy Burgess was voted the coach of the year after guiding the Rebels to a 21-9 record before their season ended in the Class 7A, Area 6 tournament.

“Being recognized by my peers is such a compliment,” Burgess said. “Our area is filled with incredible coaches. I feel honored and thankful for their friendships and their recognition.”

Grace and Sara Carr are separated in age by nearly four years, and they wear the same No. 24 jersey number. Sara continues to don No. 24 at Emory and has worn the number in volleyball since she was in elementary school.

Grace Carr now wears No. 24 for the Spartans.

Grace Carr has been on the varsity since her freshman year, when she helped Mountain Brook win the 2016 state title.

“She’s an incredible athlete,” Nichols said. “She’s graceful when she plays. She does things you can’t teach. She has a lot of natural talent. I am excited to have her around for another year.”

This season, Grace Carr was one of seven juniors on the Spartans’ roster, along with Sarah Catherine Cooper, Ann Vandevelde, Liz Vandevelde, Mary Katherine Fowlkes, Ellie Dayhuff and Kate Amberson. But they didn’t let their lack of senior leadership stop them from having another solid season.

“We knew what was expected of us and it all came together at the end,” Grace Carr said.

Carr plays volleyball year-round as a member of the Birmingham Volleyball Club. She used to play basketball, but she gave it up after the sixth grade to focus on volleyball.

“What I love about volleyball is the tempo,” Grace Carr said. “You can mess up one point and on the next ball you can score a point for your team.”

And, of course, she has Sara to lean on for advice or learn from by watching her at Emory.

“I saw her play a couple of games this year,” Grace Carr said.

Sara Carr missed the final month of Emory’s season because of a shoulder injury and concussion. The injuries prevented her from playing in the postseason as Emory won the NCAA Division III national championship.

Both sisters come from an athletic family. Their dad, Gregg Carr, now an orthopedic surgeon, starred as a linebacker at Auburn University from 1981 to ‘84 and was named a first-team All-American in 1984. He also played four seasons in the NFL for the Pittsburgh Steelers. Their mother, Juli Carr, was a cheerleader at Auburn, and their older brothers Evans and Jordan were both athletes. Their younger sister, Ann-Harrison, plays club volleyball.

“Sports is a big part of my life,” Grace Carr said. “I think there are a lot of lessons learned from sports.”

The most valuable lesson, she said, is teamwork.

“Teamwork is everything. It can’t be one person. Everybody has to participate and contribute for the team to be successful,” Grace Carr said.

Grace is undecided whether she will follow in Sara’s footsteps and attend Emory.

“I only have a year and half left in high school, but right now I don’t know what my plans are for college,” she said. 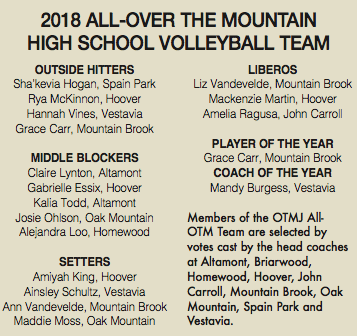