Cam Crawford wanted to play basketball so badly when he was a small boy that his mom fudged on his age so he could.

“I was 3 years old and the league in Trussville said you had to be 4 to be able to play. So when my mom registered me, she said I was 4,” Crawford said with a laugh while recalling the story. 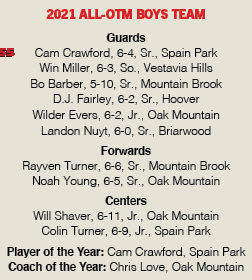 Thus began a journey that culminated this season with the Spain Park senior being named the 2021 Over The Mountain Journal’s Boys Basketball Player of the Year in a vote of Over the Mountain coaches.

Crawford, a 6-foot-4 guard, averaged 15.7 points, 5.8 rebounds and 1.9 assists per game while leading Spain Park to a 27-7 record and a berth in the Alabama High School Athletic Association Class 7A Final Four.

“I thought he had an outstanding season,” Spain Park coach Chris Laatsch said. “He was a guy who would (do) whatever we needed that night. If we needed him to rebound and defend the other team’s best player, he would do that, and on nights we needed him to score and set up his teammates, he would be that. His versatility to do so many things made him very valuable.”

Additionally, Laatsch said, “He was also a great leader. He motivated his teammates and worked hard.”

Spain Park’s season ended with a 57-56 semifinal loss in double overtime to Enterprise on a putback at the buzzer at Bartow Arena. The heartbreaking outcome still gnaws at Crawford.

“I do not think the memory of that game will ever go away,” Crawford said, “but I am thankful we were in that position. We had a great year with all the wins and the time we spent in the locker room together as teammates. You cannot overlook those things.”

Crawford surpassed 1,000 points for his career on Jan. 22, when he scored a career-high 38 points in an 87-62 victory against Gadsden City. But he doesn’t consider himself just a scorer.

“I think I can do a little of everything,” Crawford said. “I try do whatever the team needs in some way, shape or form.”

Crawford played for the Alabama All-stars in the 31st Alabama-Mississippi Classic on March 12 in Montgomery. He scored five points, grabbed two rebounds and had two assists in 10 minutes of action as Mississippi won 93-91.

Crawford will take his game to the next level. He is being recruited by several NCAA Division I colleges, including Troy, Southern Miss, Marshall, American University, High Point and Air Force.

“I’ve got to figure out the one that’s best for me,” Crawford said.

Crawford is one of two Jags to make the All-OTM team. Junior center Colin Turner is the other.

Coach of the Year

Love guided Oak Mountain to the first state championship in school history, finishing with a 24-9 record.

“It’s very humbling and I am very honored with the award because there are a lot of good coaches in our area,” Love said. “I am not sure I deserve it, but it’s much appreciated.”

Love gave credit to his players and coaching staff for what the Eagles accomplished this season.

“Stuff like coach of the year awards is a combination of having players of high character and talent and a good coaching staff who make it all come together,” he said.

“We sized our (championship) rings the other day and it was so awesome and fun. I am glad to have that opportunity to do that with my kids and coaches. It’s moments like that that make you realize how special it is to be state champions.”