You are here: Home / Features / A Life in Service

For retired Navy Rear Adm. Jack Natter, Veterans Day is more than just one day out of the year to thank military veterans for their service to the country.

“Sometimes saying thank you can be kind of shallow,” the 75-year-old Hoover City Councilman and former deputy commander of the U.S. Navy forces, said. “Do you really mean it when you thank a vet? Do you understand your role in supporting them in their mission to support our freedoms?”

Those questions are something the former deputy director of the U.S. Navy Reserve says more U.S. citizens should be asking themselves this Veterans Day–and every day.

“Veterans Day is a great way to reflect on how our military has defended our freedoms,” Natter said. “But there’s an old adage saying you should reflect on the past but you shouldn’t stare at it.  By that, I mean we have to do something not just on Veterans Day but throughout the year to make sure the men and women coming back home have jobs and are able to get back to being productive members of the society here.”

A graduate of John Carroll Catholic High School, Natter said that getting “back to being productive members of society” philosophy is not only a call to action for non-active military veterans but also for regular citizens everywhere.

That principle of service to others is something that was deeply ingrained in Natter and each of his eight siblings by their father, the Trussville and Homewood native said.

“There are seven boys in our family and every single one of us at one time or another was commissioned in the military,” Natter said. “My dad had a couple of requirements–one was that we get an education and the second was that we serve our country.”

Five of Natter’s brothers were also in the Navy and another brother served in the U.S. Air Force.

After graduating from John Carroll Catholic High School, Natter attended St. Bernard Community College in Cullman on a baseball scholarship.  After that, he attended the U.S. Naval Academy at Annapolis and earned his bachelor’s degree in 1962. 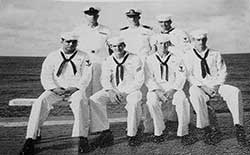 During his six years of active duty in the Navy, Natter served aboard destroyers, amphibious ships and special warcraft, mainly in the Western Pacific and off the coast of Vietnam. He was awarded the Legion of Merit four times, the Naval Commendation Medal, the Navy Achievement Medal, Combat Action Ribbon, Presidential Unit Citation, Meritorious Unit Commendation, four Vietnam Service medals and several other awards.

“She could probably tell you the exact day we met but at least I remember the year,” Natter said.

The couple married in July 1966 and a year later, moved to Alabama to a small community that at the time, was “the middle of nowhere,” Natter said.

“I have to give credit to my dad for having the vision of what Hoover would become,” Natter said. “He was in real estate at that time and told me that I needed to come out an look at the Hoover area.”

The City of Hoover was incorporated the same year Natter and his new bride settled there.

“At that time, it was just a few square blocks,” he said. “It’s been incredible to watch the city grow and prosper. It really is a great place to live.”

In Hoover, Natter and his wife raised three daughters–Marianne Etzel, Jacqueline Natter and Beth Keowan–each of whom dedicate their lives in some way to the service of others.

Jacqueline, a Lt. Commander in the Navy, was serving aboard the USS Kennedy aircraft carrier on Sept. 11, 2011, which flew aircraft over New York City after the terrorist attacks. Marianne, a government employee, responded to emergencies in a law enforcement command center for four straight days after the terrorist attacks. Beth, a pediatric nurse practitioner with the U.S. Navy Reserve, was serving at a Navy Hospital on Sept. 11, 2011.

Natter spoke about the tragic events of that day and about his daughters and other family members and friends who were on the front lines following the terrorist attacks during this year’s 9/11 remembrance ceremony in Hoover.

Natter also talked about his friend, retired Admiral Bud Flagg, who lost his life on Sept. 11, 2011 when the hijacked plane he was aboard crashed into the Pentagon.

“His wife, Darlene, was on the plane, too.  Nancy and I had known them for a long time,” Natter said. “It was a very difficult time.”

After his active duty in the Navy ended, Natter remained in the Naval Reserve and started pursuing a law degree at the Cumberland School of Law at Samford University.

“I became interested in the law when I was working in real estate,” Natter said. “I took a real estate law course and loved it.”

Natter earned his law degree in 1973 and practiced law until 1992, when he was recalled to active duty to serve as the deputy director of the Naval Reserve.  The job took the Natters to Washington, D.C. until 1995.

Back home in Alabama, Natter continued his law practice as a partner with Natter & Fulmer, P.C.–specializing in business law, real estate, probate and litigation–and continued to serve his local community.

Natter served on the Hoover’s Veterans Committee for the first seven years of its existence.

“My nephew, Michael Natter was on the (Hoover) City Council when the Veterans Committee was being formed and he asked me if I wanted to be a part of it and I was glad to have the opportunity to serve my city in that way,” he said.

In the fall of  2011, Natter was asked to take an even larger role in serving Hoover.

In September 2011, then-Mayor Tony Petelos resigned from his post with Hoover to become Jefferson County’s first professional county manager and the Hoover City Council appointed Council President Gary Ivey as the new mayor, leaving a vacant seat on the dais.

“When Ivey called and asked if I’d like to be considered for the council seat, I think I told him that he was crazy,” Natter said. “And not because I was opposed to serving but serving in that capacity was the farthest thing from my thoughts.  I talked to my wife about it and she said she thought I should do it.”

Natter was sworn into office on Oct. 17, 2011 and served out the remainder of Ivey’s council term, which ended in November 2012.  Natter won the Place 4 seat on the council in the November 2012 election.

Natter said he likes serving as the Place 4 representative “because the council is very conservative and very much open to constructive criticism and to new ideas for furthering the city and making it a better place for all citizens.”

Natter said Hoover has a lot to be proud of but what impresses him most is the long tenure of its loyal city employees.

“What impresses me the most is the very low turnover among the city’s employees,” Natter said. “It shows that people really care about the city and about each other.  When we do have a rare vacancy, we have from 30-100 applications from people who want to work here.”

But working for the city or being a city official is not the only way Natter said residents can show pride in their community.

“Whether it’s volunteering in your neighborhood, with your church, at your child’s school, there are a million ways to help out in some capacity every single day,” Natter said.

Natter said whether it’s on the front lines of a war on foreign soil or the trenches of municipal government back home, he hopes more people will think about serving their country, in some way, big or small, this Veterans Day.

“If you think of others and not of yourself by serving your community and your country in some way, everything else will take care of itself.”

For information on Veterans Day events in the Birmingham metro area, click on this link: https://www.otmj.com/2014/10/veterans-day-events-kick-off-nov-9/

Have some exciting OTM NEWS? Submit YOUR NEWS
Monday, September 26, 2022