You are here: Home / Latest Posts / Betting on the Farm: Jack Staub and Renny Reynolds Have Created Their Own Eden in Pennsylvania

Jack Staub is in the midst of an interesting life. He’s written five plays, appeared on several daytime dramas, been an ad agency creative director and even inspired a character in the Academy Award-nominated movie “Metropolitan.”

But he’s especially known as a garden writer and as one of the most knowledgeable edible gardening experts around. He’ll be sharing some of his vast knowledge and ideas at this year’s Antiques at The Gardens.

Staub and his garden designer partner, Renny Reynolds, are appearing at the show as part of the Red Diamond Lecture Series. In 1980, the two bought – and brought back to life – Hortulus Farm, a once-thriving 100-acre farmstead in Bucks County, Pennsylvania. They carefully set about restoring its 18th century buildings and reviving its gardens. Today, thousands of visitors go to see the private garden, which has been featured on HGTV, PBS and The Travel Channel and in publications such as House Beautiful, House & Garden and Country Living. It even drew accolades from the New York Times, which called Hortulus Farm “formal, intimate and grand.”

Staub and Reynolds were living and working in New York when they bought their Pennsylvania property.

“Hortulus Farm was a weekend idea at first,” Staub said. “The whole idea of buying the farm was restoring it. We wanted something with some resonance. Renny had been looking in Bucks County for two years and saw an ad for the farm in a local paper.

“He drove down the driveway, and there were an 18th century farmhouse, two huge dairy barns, a carriage house. This is Quaker territory, so everything is very simple and well built.”

Like many weekend ventures, the farm turned into an extensive project, and the two men now make their home there.

“We’ve been fortunate to get a lot of national recognition,” Staub said. “We’re only the second garden to be an affiliate of the National Garden Conservancy.”

He said Hortulus Farms also is a longtime member of Greater Philadelphia Gardens, which includes other well-known gardens such as Longwood, Winterthur and Chanticleer.

Staub’s interest in edible gardening took root in England, where he met and became friends with Rosemary Verey, an internationally known English garden designer, lecturer and writer. Verey created a famous garden at Barnsley House in the Cotswolds that includes a potager – a mixture of vegetables, fruits and flowers presented in a formal design.

“I learned a lot about the beauty and productivity of vegetable gardens from her,” Staub said.

He’s a prolific writer. He’s written for magazines such as Fine Gardening, Garden Design, Horticulture, Food & Wine and Country Living Gardener, and he has eight books to his credit. His ninth book, written with Reynolds, will be published in January.

“It’s called ‘Chasing Eden’ and will be about all our experiences here at Hortulus Farm,” he said.

The book is available for pre-order at www.amazon.com. 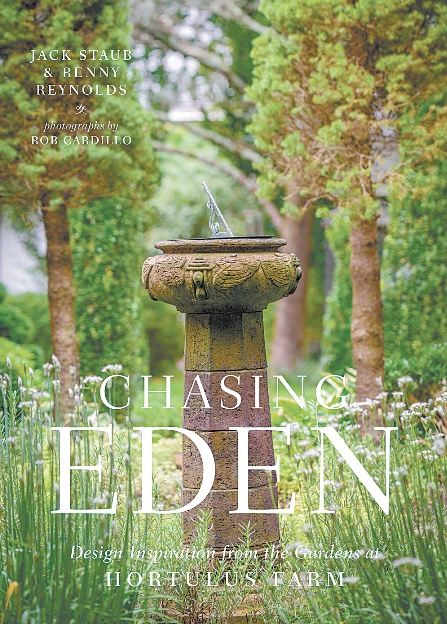 Like Staub, Reynolds has a fascinating resume. He’s a renowned entertaining, gardening and lifestyle expert whose book, “The Art of the Party,” has been called the “party planner’s bible.”

He received the Great American Gardener award from the American Horticultural Society in 2008.

The Antiques at The Gardens event won’t be the two men’s first trip to Birmingham. Staub said he and Reynolds have been to the city before to visit Margot Shaw, founder and editor-in-chief of Flower magazine.

“That’s how we connected with the show as well,” Staub said.

“We’ve visited countless gardens in England over the years,” Staub said. “Renny will talk about English gardens, and I will talk about how we translated that into our garden.”

He said both he and Reynolds often travel and speak at events.

“I tailor my talks somewhat to the area where I am,” Staub said. “A lot of it is really theoretical. We love meeting people who are interested in gardens and exposing people to ideas.”