Rising to the Occasion:

Carole Griffin, owner of Continental Bakery and Chez Lulu, isn’t one to shy away from a challenge. 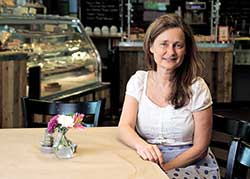 When she opened the bakery in Mountain Brook’s English Village 30 years ago, the neighborhood’s business district wasn’t the hub of activity it is today.

“English Village was an outlying area then and pretty sleepy,” Griffin said. “The Park Lane grocery store was an anchor, and a fresh market brought in chefs from all over town. I think we also helped bring vitality in.”

The decision to put her European-style bakery in English Village proved to be a smart one.

“I felt like the Mountain Brook clientele would have the palate to appreciate what we were doing,” Griffin said. “Since the beginning, we were warmly welcomed. Even during that first year, we were operating in the black.”

“Chez Lulu is an extension of the bakery and not really a separate business,” Griffin said. “We have two sides of the same kitchen.”

Seven months ago, Griffin took on a new challenge, opening a second Continental Bakery/Chez Lulu at 1820 Fourth Ave. North in downtown Birmingham. The space, formerly occupied by Mix bakery, is vastly different from the original store.

The hardest thing about renovating the building, she said, was figuring out how to “lulu it up.” The English Village store has a cozy, almost medieval atmosphere, while the downtown space presented Griffin with lofty ceilings, silver-painted metal fixtures and stark white walls.

“We wanted the place to be warm and welcoming,” Griffin said. “We’re in the theater district, so we took inspiration from that.”

She installed long velvet theater-style curtains and painted part of the floor in a black-and-white harlequin pattern to mimic a similar design at the Alabama Theatre.

Griffin painted metal fixtures gold, hung prints and paintings on the expansive first-level bakery walls and created “Lulu’s Lounge,” an intimate downstairs bar area where customers can gather. Old wine barrels were taken apart and used to create see-through partitions between the bakery and the lounge.

Tracy Martin, a welder who made iron tables and other ironwork pieces for Chez Lulu, made an observation that Griffin said helped her find direction for her downtown redesign.

“Tracy said, ‘This is Lulu comes to Paris,’” Griffin said.

The size of the new bakery and restaurant opened new opportunities, she said.

“We can have large private events here,” Griffin said. “We can accommodate up to 120 people easily.”

Opening in downtown Birmingham also helped fulfill a dream, she said, because she originally wanted to open her bakery on the city’s Southside.

The Birmingham native left her hometown to attend college at Rice University and also traveled in France. She was living in Washington, D.C., when she came home for a visit and attended a Southside festival.

“It was exciting, and I saw a renewed liveliness here,” Griffin said. “I wanted to be part of that.”

She first looked for a place for her bakery in the Southside neighborhood before finding the building in English Village, she said.

Griffin, who once planned to be a lawyer, said her love for food comes from a part-time job and from her family.

“When I was in college, I worked nights at a bakery,” she said. “I loved it—the work was so captivating. We’d make hundreds of baguettes and make hand-laminated croissants.”

That was the end of her plans for a career in the legal field, she said.

“My ambition to be a lawyer evaporated. I could have just stayed at that bakery. If they’d paid me 25 cents more an hour, I might still be there,” she said, laughing.

“My family is Czech, and they maintained a strong connection with that heritage,” she said. “They loved food. Every meal was a feast. Everybody would stay at the table for two hours, and the conversation often revolved around food. That’s where my relationship to food was born.”

“But we encompass the whole Mediterranean region, not just France,” she said. “We have northern Spanish tapas, northern Italy handmade pastas, and we even have some northern African cuisine.

Griffin is one of 13 business owners who will be honored as Alabama Retailers of the Year at the 33rd annual Alabama Retail Day luncheon Sept. 23 in Vestavia Hills.

While her passion is food, she recognizes the importance of sound business practices.

“I hired someone with management experience about 10 years ago,” she said.

It’s crucial, too, to have good relationships with employees, she said.

“You can’t be a perfectionist when you deal with human beings. You have to respect other people’s views on the best way to get from Point A to Point B. You can drive people too hard,” she said.

“We have the best team on the planet,” Griffin said. “The most exciting thing for me about our downtown store is that we hired a new chef, Joshua Blackwell, who came from Vittoria. We paired him with J.R. Jacobson. J.R. was the chef de cuisine at Little Savannah, opened his own business and wanted to get back into the kitchen.”

If Griffin’s employees need inspiration for working hard, they need look no further than their boss.

“My fiancé told me I’d been working 70 hours a week, and I had no sense of that,” Griffin said. “I love what I’m doing and wish I could multiply myself so I could do it even more.”

Have some exciting OTM NEWS? Submit YOUR NEWS
Monday, September 26, 2022