Mountain Brook couple Julie and Scott Joe Bernstein believe that wearing a mask is a sign of respect toward your neighbors.

To help those who find masks uncomfortable, they have created their own brand of masks, called Sleevz.

Sleevz are made to accommodate eyewear, as well as transition from a drape over the face to a face mask in one smooth move. The product not only addresses comfort concerns but also encourages the use of eyewear as a means to protect the entire T-zone from potential virus exposure.

Though the couple has yet to send out their first shipment of product, they already have caught the eye of celebrity entrepreneur Marcus Lemonis, the host of “The Profit.”

The format of Lemonis’ show changed as the pandemic limited his ability to travel the country meeting with small business owners. He now hosts a virtual form of “The Profit” on Instagram Live, in which he holds Q&As with entrepreneurs.

“We’ve been watching every episode for the past seven weeks, trying to get on,” Scott Joe said.

They finally made it onto episode four, and Sleevz peaked Lemonis’ interest enough to invite them back a second time to try to persuade him to invest in their product.

The Bernsteins are now awaiting their third call with Lemonis, they hope on Tuesday’s episode, in which he will decide whether he is going to invest in the product.

Scott Joe was familiar with wearing masks on the job from working in the scrap metal recycling industry.

“I get into situations where, if I am going to be in a dusty area I would try to wear one, but after five or 10 minutes, I end up taking it off just because it’s so miserable,” he said.

Rather than having the mask pull on the ears, he considered creating one that fastened to a hard hat, or possibly one that attached to clothing.

Once masks became more prevalent throughout the country, Scott Joe and Julianna realized that the issues they were experiencing were more common than they knew. They took it upon themselves to start working on a concept and design for their own mask.

It wasn’t much of a stretch for them, as Julie has design experience, having previously owned a fashion company.

The pair worked with a seamstress for months to get the product right, meeting with her often three times a week.

“The beauty with this product is that it takes the pressure off of your ears and your face and puts it onto the arms of the eyewear,” Julie said.

According to their market research, the majority of the population wears some form of eyewear daily. They discovered that 61% of the world’s population wears prescription eyewear, and others wear sunglasses, blue light glasses or safety glasses daily.

Throughout the pandemic, medical professionals have suggested that the public refrain from touching the T-zone of their face to reduce the risk of contracting the virus through the eyes, nose and mouth.

“It’s worth the comfort and breathability to find a pair of glasses to use with the mask,” Scott Joe said. He said that’s particularly true for kids, as glasses will act as a further deterrent to keep them from accidentally touching their eyes.

“We’re, at the end of the day, just trying to create a better product and just solve some problems,” Julie said.

Comfort was key when creating the prototype.

The couple chose a breathable, washable fabric with an antimicrobial and moisture-wicking layer for those who are sick of mask-related acne.

There is also an extra pocket that fits most medical-grade filters.

The mask slips on to the arms of your glasses and can then be fit to your face by modeling the nose grip to the bridge of your nose and pulling back the mask to rest against the cheekbones.

It can then be worn as a drape over the face, which works for sipping a drink or exercising.

To provide full mask protection, users fold the bottom of the mask and engage two magnets to secure the fabric underneath the chin. 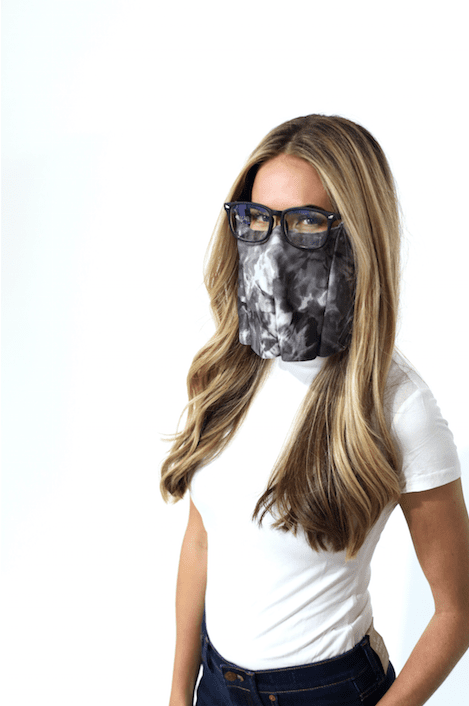 While Sleevz initially was created to increase comfort while wearing glasses, the Bernstein have found some quirky additional benefits.

It can be used as a sunshield for those who are afraid of damaging their skin.

“When it is super hot, I’ll throw it on if I’m going to be out in the sun a lot,” Scott Joe said. “It keeps the sun from beating down on my face.”

It also accomplishes some of the same things as masks that are made for hunters and fishermen.

When worn loose, it is easy to drink while still protecting yourself. Eating is also doable, Scott Joe said, as long as it’s simple finger foods.

The ability to shape the mask to your face also help accommodate beards.

Sleevz is also great for people who wear hearing aids, something that they learned through Scott Joe’s grandmother.

“She is about to turn 90 in two months,” Julie said. “She was at the Piggly Wiggly recently, trying to take her mask off in the parking lot and her hearing aid fell out onto the parking lot. It was difficult for many reasons because it’s not so easy for her to get down and reach to pick it up.”

Throughout the process, the couple has worn their prototypes when out and about to test the product.

“I’ve lost count of how many times someone has come up to us and asked where we got our masks,” Scott Joe said.

Though they expect to see the mask market shrink at some point, the couple believes that masks won’t be going away any time soon now that they are more socially acceptable in American culture.

The practice of wearing masks is prevalent in other cultures, for example in East Asian countries where masks are worn to protect against intense air pollution. In many of these countries, people also choose to wear masks as a common courtesy whenever they are sick, Julie added.

“We do feel like some people are going to be scarred by this pandemic,” Scott Joe said.

The Bernsteins have plans for the future should their first round of sales succeed.

They have a couple of patents in the mix awaiting further development and plans to roll out some medical grade masks.

“We were trying to solve the one main problem of covering your eyes and we ended up being able to solve a lot of other problems,” Scott Joe said. “We kind of feel like we have reinvented the face mask.”

The couple hopes to send out their first shipment of product by the end of October. They added a child-size mask to the mix recently, which set their early-October shipping date back a few weeks.

Have some exciting OTM NEWS? Submit YOUR NEWS
Saturday, January 22, 2022