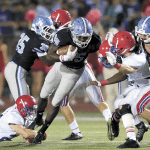 We're kicking off the season with our annual with previews of your favorite Over the Mountain football teams. Meet the players that coaches predict will play key roles in their success on the field. Follow the links below for team profiles, schedules, rosters and more. An added bonus to get you into the spirit of the season, OTMJ Sports Writer Lee Davis … END_OF_DOCUMENT_TOKEN_TO_BE_REPLACED

By Lee Davis Spain Park’s two football victories over archrival Hoover last season added some spice to an already intense crosstown rivalry. And Larry Wooden wouldn’t have it any other way. “Yes, we’ve talked some smack with them (Hoover players) since then,” Spain Park tailback Wooden said at media day in July. “It goes both ways. It’s just a fun part of the … END_OF_DOCUMENT_TOKEN_TO_BE_REPLACED

By Lee Davis Whenever Homewood coach Ben Berguson discusses his 2016 team, he always points out a strange quirk in the Patriots’ recent won-lost records. “For the past four seasons, we’ve won exactly nine games each,” said Berguson, who is entering his third year as head coach. “That’s pretty good at a lot of places, but we’d really like to improve on that this … END_OF_DOCUMENT_TOKEN_TO_BE_REPLACED

By Lee Davis Hoover coach Josh Niblett has celebrated four state championships with his players since he took over in 2008, but somewhere along the way the cheers became less notable. At times, all he could hear following a win was a sigh. “That’s kind of been a change of thought around here because, normally, when you won, you just went, ‘Wheeeew. Alright. Glad we … END_OF_DOCUMENT_TOKEN_TO_BE_REPLACED