You are here: Home / Archives for AMBUCS 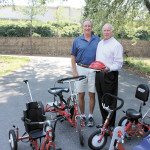 By Lee Davis After leading Mountain Brook to 68 state championships in track and field over a four-decade career, Greg Echols decided to retire. But at the relatively young age of 60, Echols still needed a path for the rest of his life. Last February, he found it. Echols, now 61,  became executive director of the Greater Birmingham chapter of AMBUCS, a non-profit … END_OF_DOCUMENT_TOKEN_TO_BE_REPLACED

Have some exciting OTM NEWS? Submit YOUR NEWS
Sunday, August 14, 2022