You are here: Home / Latest Posts / ‘Every Week, We’ve  Got to Bring It’: Spain Park Filling in Its Roster in Bid to Excel

Spain Park will have some key positions to fill in 2018, but coach Shawn Raney feels confident that he has enough “program kids” who are up to the task. 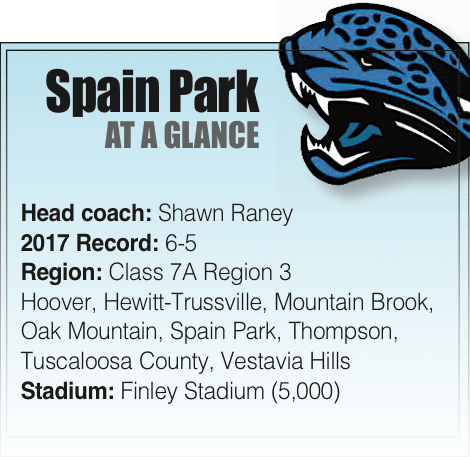 “Program kids” are what he affectionately calls the athletes who have been a part of his program from the moment they could be but who often are inexperienced and undersized before their arrival, who work hard and patiently wait on their turn to play on Friday nights.

Raney said he’s pleased with the way his players have been preparing for the season during spring and fall practice.

“We’ve had some kids come along defensively and I think we’ll be more athletic,” he said.

The Jaguars fell in the first round of the state playoffs a year ago, a 33-21 loss at Hewitt-Trussville. Raney decided then that, if the Jaguars were going to improve while playing in Alabama’s toughest region of high school football, they needed to begin on defense.

“After last year, I felt like we had to get better in space defensively,” Raney said. “We moved some kids around – moved some linebackers to defensive end, some secondary kids down to linebacker – and I think that has made us more athletic.”

“Those are two of the best athletes we have in school, and they’ve adjusted really well,” said Raney. “Kenyon is a kid that I think will have a huge impact on both sides of the ball. We’ve been practicing him on defense since the spring. I think playing defense has helped his knowledge of the game. He’ll play with the defense one day and the defense will dominate and he’ll play with the offense the next day; he swings the pendulum depending on what side of the ball he’s on.”

The front four has holes to fill, but with Cedric Tooson and Jake Horton on the ends, the Jaguars have some experience and size. Horton added 15 to 20 pounds to his 6-foot-1-inch frame in the offseason. The rest of the defensive line will be by committee, led by Scott Moates and DQue Hill.

On offense, the Jaguars look to fill the shoes of quarterback Braxton Barker and running back D’Arie Johnson, who graduated last year. Mason Pronk, a junior, will get the first opportunity at quarterback.

“I feel really good about him,” said Raney. “He’s a kid that’ll do everything he’s coached to do. He’s an outstanding leader that reminds me a lot of Braxton (Barker). He’s a real humble kid. His teammates love him. He’s a great athlete that can run it and throw it. He came in last season against Gadsden when Braxton was banged up a bit and we went right down the field and scored. He’s just a winner.”

Johnson split carries with Jalen Henderson last season, and Henderson will return to carry the larger share of the load in 2018. He put on 5 to 10 pounds of muscle in the offseason, and Raney is confident that he’ll have a breakout season. While he had just 10 fewer carries than Johnson a year ago, Henderson figures to take about 70 percent of the carries this season. He’ll be spelled by Manny Austin.

Along with Hines, Kameron McDaniel will see the majority of the time at wide receiver, while George Hill, Ben Rice and Jacob Jenkins will rotate in.

Three-year starter William Mote will move out from center to tackle and Josh Mullins will move in to center, while Cameron Young, Jack Guthrie and Zac Shaw will fill in the rest of the offensive line.

“Our first goal is always to win the first game,” Raney said. “I worry about us each day trying to get better, and that’s what I preach to these kids. We know what region we’re in. Every week, we’ve got to bring it. But we don’t talk about how many we need to win to make the playoffs. I want us to get better each day, whether we’re playing Hoover or Hewitt. If you make the playoffs in our region, that’s a huge accomplishment. If we make it, we’ve been battle-tested, and hopefully we can make a run at it.”

The Jaguars will have a chance to accomplish that first goal Aug. 24 when they host Hillcrest, of Tuscaloosa. They’ll hop into the 7A Region 3 competition Sept. 7, when they host Vestavia Hills.