You are here: Home / Archives for Lee Walls Jr.

Story by Donna Cornelius • Photos by Lee Walls Jr. You can’t help catching the holiday spirit at Kalli and Andrew Delaney’s Crestline home. From the candy-filled kitchen island to Christmas trees that range from beautifully appointed to whimsically delightful, this house would make Santa himself feel right at home. This year, the Delaneys not only will enjoy their house … END_OF_DOCUMENT_TOKEN_TO_BE_REPLACED 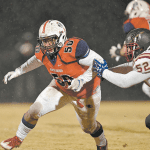 By Rubin E. Grant Pinson Valley 48, Homewood 7 Homewood reached the quarterfinals of the state playoffs for the first time since 2006, but defending Class 6A champion Pinson Valley made sure the Patriots would advance no further. Pinson senior quarterback Bo Nix showed Homewood just what kind of quarterback Auburn would be getting, since he is an Auburn commit. Nix … END_OF_DOCUMENT_TOKEN_TO_BE_REPLACED

By Emily Williams As a retired major general of the Alabama Army National Guard, it has been ingrained in David Burford to work “by, with and through others.” Burford’s father, 2nd Lt. Macon C. Pippen, was a veteran of World War II who died, partially due to his battle wounds, when Burford was 10 years old. “Somewhere in that 10 years I gained a respect for what he … END_OF_DOCUMENT_TOKEN_TO_BE_REPLACED

By Blake Ells Just one senior – Libby Grace Gann – departed Mountain Brook last season, and this year, the Spartans’ volleyball team will have none. But a large junior class is moving in to help the Spartans surpass last year’s season, in which the team fell in the state semifinals to McGill-Toolen 3-0. “Every day we come in, we know how last year ended,” said junior setter … END_OF_DOCUMENT_TOKEN_TO_BE_REPLACED