You are here: Home / Latest Posts / ‘Real Good Leadership  Coming Back’: Vestavia Hills Returns in 2018 With Experience at Most Positions

It was quite an off-season for Vestavia Hills head coach Buddy Anderson. The winningest high school football coach in Alabama was inducted into the National Federation of State High School Association Hall of Fame on July 2 during a banquet in Chicago. 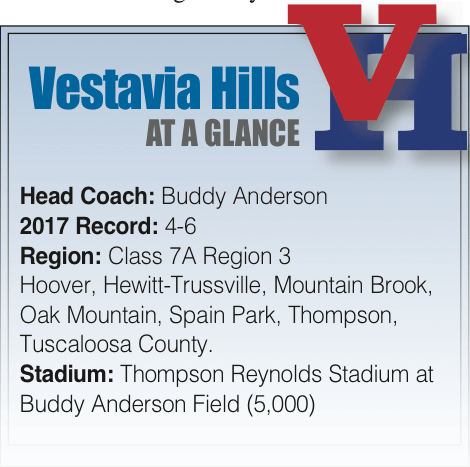 “It was nice,” said Anderson, who is just the 12th individual from Alabama enshrined in the National Hall of Fame. “That was a very fun time and I’m very blessed. All of my family got to go. My brother and his wife got to go. It was a very humbling ceremony.”

He’ll enter his 41st season as head coach of the Rebels in 2018. He returns from fall camp, which he has held at Judson College in Marion since 1990, optimistic about his 2018 team.

“It’s a time to get away and concentrate on everything football,” he said. “We eat, drink and sleep football for three days.”

The Rebels look to improve on last season’s 4-6 mark in Alabama’s toughest high school region. That team was young, which inherently gives Vestavia Hills the gift of experience this season.

They’re all seniors and they’ve all got size. It’s a group that has started since they were sophomores and why the Rebels “took some lumps,” according to Anderson.

“Now it’s their third year playing,” Anderson said. “Every now and then, we’d have just one sophomore starting for us or whatever. But I don’t think we’ll have any sophomores starting for us this year. We might have some play, but not starting for us, which is a good situation.”

He’ll expect those seniors to lead, but he’ll also expect the same out of the seniors he started a season ago as juniors.

“I feel good about the leadership in this class,” he said. “This class has some solid leaders. We’ve got to be ready to strap in on every Friday night, because if you’re not, you’ll get it handed to you.”

A Battle for Field Time

Anderson expects the competition on the defensive line to be tough, beyond Salmon’s position. Jake Levant will likely be starting at the other defensive end, sharing time with Ryan Lockhart and Cal Stubbs, and on the inside, Andrew Sims, Diego Melendez, Deven Jones, Cam Monistere, Gaines Berry and Will White will fight for time. Grant McLean saw starting time a year ago, but an injury will keep him from the field for the first couple of weeks of 2018.

Alongside Barrentine at linebacker, Anderson expects A.J. Sims, Bennett Whisenhunt and Joh Winford to get most of the snaps. The defensive backfield will be led by Will Brooks, Cole Johnston and Sam Willoughby, while Gyasi Hill, Colton Horn, Brock Payne, Kevin Cunningham, Jermaine Harris and Joseph Sullivan will also compete for time.

Eli Sawyer will get the start at quarterback, and he’ll be backed up by Sean Smyth, the Rebels’ most experienced wide receiver. Josh Silverman will lead the running backs, along with Frankie Donze and Gaines Berry.

Vestavia Hills opens with a jamboree at home against Briarwood Christian on Aug. 24. They’ll get the season underway in earnest Aug. 31, when they host Homewood.