As he enters his third year as the head coach of the football team at his alma mater, Matthew Forester finally can call the Briarwood Christian Lions his team.

“This is the first varsity class to be entirely under me,” Forester said. “We’re really excited about it.”

The Lions have had two solid seasons under Forester, including achieving an 8-3 record and reaching the second round of the state playoffs after moving up from Class 5A to 6A in 2020.

Forester is eager to see whether the Lions can improve on that showing this season.

“We’ve got a lot of returning playmakers on offense and some good players back on defense,” Forester said. “I’m looking forward to seeing how good we can be.”

Here’s a position-by-position breakdown of the 2021 Lions:

Junior Christopher Vizzina returns for his third season as the starting quarterback.

“The best news of all is he’s a junior and I’ll have him next year,” Forester said. “Normally after two years our quarterbacks are heading off to college.”

The 6-foot-4, 200-pound Vizzina already has a bunch of college offers, including several from Power 5 NCAA Division I programs.

“He can throw the ball as well as most anyone and he’s smart,” Forester said.

Two sophomores, Josh Thompson and Caleb Ward, are battling to be the backup.

“They have done a good job preparing themselves,” Forester said. “I’m excited about what we have at quarterback.” 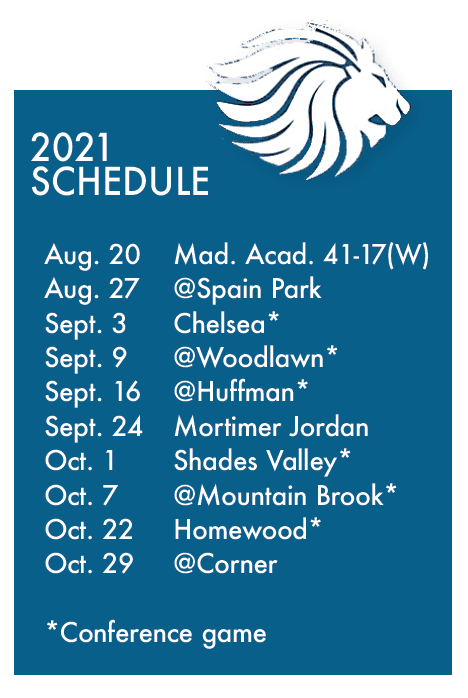 Senior Luke Reebals returns for his third season as a starter. “Normally, you don’t have game-changers like that stay around for three years,” Forester said. “He’s a dynamic playmaker.”

Senior Riley Margene and sophomore Cooper Higgins will share the load with Reebals in the backfield.

Senior receiver Nicholas Dicen is another experienced skill player returning. “He’s been a steady cog for us,” Forester said. “He has made some big-time plays.”

Forester said he’s excited about what the Lions have up front, including returning starters Charlie Heidepriem at center and Alex Moorer at center. Moorer started at the guard position last year.

The rest of the line will come from a group that includes Harrison Clemmer, Rich Connell, Luke Shultz, Andy Foust, James-Michael Tedesco and Jason Bess.

Clay Dorrill will man the other defensive end spot, while the tackles will be Holden Patterson and Max Luster. Preston King and Garrett Harmon provide depth.

The linebacking crop will be completely new. “We have three new ones for the first time since 2010,” Forester said. “They have a lot of learning to do, but they’re working hard.”

Senior Haddon Stubbs was moved from safety to linebacker to give the unit some experience at the strong side spot. Senior Grant Bruce will play middle linebacker and senior Hardy Thompson will play weak side linebacker.

Two seniors are returning to the secondary, Reece Garner and Seth Alford. Both played cornerback last season, but Alford is moving to safety. Others in the mix are Nicolas Frost, Brady Waugh, Grey Reebals and Peyton Steed.

“Our secondary will have a new feel,” Forester said.

Junior Aidan Punch returns as the placekicker, but he’s being pushed by sophomore Reid Hollis. Stubbs returns to handle the punting duties.