If ever a coach could say his team is in a rebuilding mode, it’s Mountain Brook’s Chris Yeager.

The Spartans graduated 36 seniors from their team that went 12-2 and reached the Class 6A semifinals in 2020.

But Yeager isn’t feeling sorry for himself going into the 2021 season. He’s just the opposite, embracing the challenge ahead.

The Spartans will have more than 30 seniors again this season, but they are not as seasoned as the seniors from last season.

“We’re going to have some new guys who have to step up,” Yeager said.

Here’s a position-by-position breakdown of the 2021 Spartans:

The Spartans have to replace Strother Gibbs, a multi-dimensional three-year starter, at quarterback.

Junior John Colvin has emerged as the starter, ahead of junior Benjamin Parrott and sophomore John Cooper on the depth chart.

“John (Colvin) is very cerebral,” Yeager said. “He’s a great processor of what we’re doing and he makes good decisions.”

Parrott and Cooper are capable backups, according to Yeager.

“Ben is a good runner and good athlete,” he said. “John is a mixture of the two. We’ve got to get him prepared to play at this level.”

Sophomore Cole Gamble figures to be the Spartans’ primary ball carrier in the running game.

“He’s a little different from running backs we’ve had in the past,” Yeager said. “He’s got a burst. He’s got great straight-ahead speed. He’s very talented.”

Juniors Will Waldrop, Heath Griffin and Evan Bibb are also in the mix. Seniors George Cain and Michael Lorino will fill the H-back position.

The Spartans return several receivers from last season. Among the group are seniors Jake Thompson and Sims Brown,and junior Jackson Beatty, who all started last season.

Junior Rob Gillespie and sophomore Clark Sanderson also will get playing time, and Parrot will provide depth. Junior Carter Kelley will play tight end when the Spartans employ one.

Senior tackle Wilder Hines is the only returning starter on the offensive line. “We lost more there than anywhere,” Yeager said.

Seniors Nelson Crawford and Wyatt Brooks were competing for the center spot. Junior Davis Peterson and sophomore Will Courtenay were the leading contenders for the two guard spots and junior Mac Smith was the frontrunner to start at the other tackle spot. 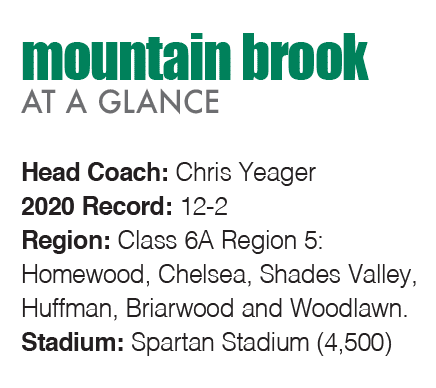 The linebacking corps has plenty of experience. John McMillan is a three-year starter at outside linebacker and Trent Wright returns at middle linebacker. Vaughn Frost and Quinn Thomas also saw plenty of action in 2020.

“I feel good about them,” Yeager said.

The secondary also will have some new faces with Jones Beavers and Braxton Dean taking over the safety spots and Mac McCowan and Will McIlvaine playing cornerback. Senior Elliott Bloomston is the primary reserve in the secondary heading into the season.

Having junior Reed Harradine on the team gives the Spartans one of the top kickers in the state. He’s been their starter since he was a freshman, handling both placekicking and punting duties.

“He has to be a college prospect,” Yeager said.

Senior Trent Hirn could spell Harradine at punter from time to time.