Only one high school in the greater Birmingham area can boast a Heisman Trophy winner, a Nobel Prize recipient and a veteran Vatican diplomat among its graduates. That school, John Carroll Catholic High, is celebrating its 75th anniversary this year.

John Carroll, which also is celebrating the 30th anniversary of its move to Lakeshore Parkway from its original site on Birmingham’s Southside, is well-known for the high caliber of its graduates, including its most famous: Heisman Trophy winner Pat Sullivan, ’68, Nobel Prize in Physiology or Medicine winner Eric Wieschaus, ’65, and the head of the Pontifical Ecclesiastical Academy in Rome, where priests are trained for the Vatican’s diplomatic corps, Archbishop Joseph Marino, ’71.

Those three are among the more than 12,000 graduates to earn diplomas since the school opened its doors in 1947, according to John Carroll’s website.

Homecoming, when the Cavaliers play Hayden High School on Sept. 9, will be the official kickoff to the year-long celebration and a major capital campaign, said Alyssa Weisberg, the school’s marketing communications director.

Now a cornerstone of Catholic secondary education in the Birmingham area, John Carroll was the brainchild of Thomas J. Toolen, the archbishop of the Mobile Diocese, which included Birmingham at the time.

Catholic elementary schools already had been established in the area, and some taught students through grade 12. But Toolen, a strong booster of Catholic schools, wanted a central high school for the area’s Catholic teens. The elementary schools that taught high schoolers were crowded, according to newspaper accounts of the time.

In March 1942, Toolen was the guest of honor at a testimonial dinner at the Tutwiler Hotel where plans for the new high school were outlined. By the end of the month, fundraising pledges from 17 Birmingham parishes to build the new school had surpassed the $150,000 fundraising goal by almost $26,000, for a total of $175,931, or $3.2 million in today’s dollars.

Estimated construction costs rose through the years – by this time the U.S. was fighting in World War II – so that by the time construction actually began in late 1946, the estimated total cost had risen to $750,000.

Fundraising continued, spearheaded by the Friends of Catholic Education, which was organized early on by Birmingham businessman John Carroll to help raise the money to build what was then called Central Catholic High School.

In 1946 the first Toy Bowl, an annual fundraising football game featuring players from Birmingham’s Catholic elementary schools, drew 30,000 to Legion Field amid much fanfare. Frank Thomas, then coach at the University of Alabama, and Frank Leahy, coach at Notre Dame, coached the teams at the inaugural game.

News reports at the time noted organizers had hoped to get Frank Sinatra or movie star Pat O’Brien, or both, for the first game. O’Brien, who played legendary Fighting Irish coach Knute Rockne on film, turned up to serve as master of ceremonies.

Daniel Construction Co. was awarded a $350,000 contract to build the school on Highland Avenue between 23rd Street and Milner Crescent and work began in November 1946.

It was the second Catholic high school to open in Birmingham that’s still in existence – Ensley’s Holy Family High School opened four years earlier, in 1943, but it was limited to Black students at that time in the Jim Crow South.

Until it moved to its Lakeshore campus in 1992, the school underwent a number of changes. Among these were construction of the Bishop Toolen Center, which opened in 1951, a new school cafeteria finished in 1957 and the east wing, which was completed in 1958. In the early 1960s, an athletic complex was built on Montclair Road and in 1964 a new convent for the Benedictine Sisters who taught at John Carroll was dedicated. 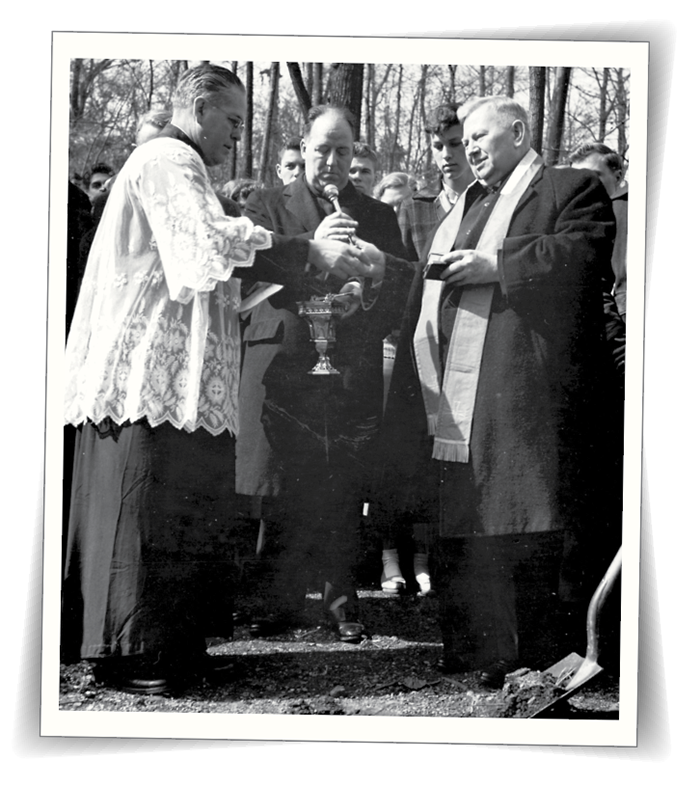 1964 marked another milestone for the school, one that coincided with the Civil Rights Movement, as John Carroll was integrated that September.

Robert C. Smith, ‘66, Madeliene Humphrey, ‘66, Fred Tyson, ‘67, and Diane Tucker, ‘67, transferred from Immaculata High School (as part of Our Lady of Fatima Parish) as the first Black students in the school’s history, according to a school timeline on John Carroll’s website. This was as a result of the cooperative efforts of Immaculata’s principal, the Rev. Eugene Farrell, and John Carroll’s principal, Monsignor William R. Houck.

“The first day of school was intense. The police were all there in case the crazies came out,” she recalled.

“We are more diverse in community, race, ethnicity,” Bouton said. “We take pride in that.”

Newspaper stories from the late 1950s and 1960s also highlighted interesting facets of school life, such as the Birmingham Post-Herald’s Teacher of the Week story published on Nov. 11, 1957, that paid tribute to John Carroll’s Sister Maurus, a French and religion teacher who introduced square dancing to the students.

“When the strains of good old country-style music float through the halls, you can bet Sister Maurus is right there in the middle,” the story said.

In 1967 John Carroll parents donated 1,500 of their trading stamp books saved over 18 months to go toward the cost of a new school bus. The trading stamps, usually given to supermarket shoppers based on the amount they spent, covered five-sevenths of the price of a new bus, according to a Feb. 13 story in the Birmingham News. The PTA arranged for cash to pay the balance on the bus, the story said.

The school moved from tight quarters on Highland Avenue on Birmingham’s Southside to a spacious campus off Lakeshore Drive in the Oxmoor Valley in 1992.

“The whole Catholic community was abuzz because it was brand new,” said Lee Ann Heaton Fuller of Pelham, a John Carroll teacher who graduated in 1997.

Today, John Carroll maintains a high standard of college preparatory education, with 100 percent of this year’s graduating class headed to college or the armed forces.

About 530 students are enrolled, and about 175 of them are new students, drawn from throughout the metro area and beyond, Weisberg said. “Our growth has been about 10 percent over the last two years.”

Enrollment is about half of what it was until the mid-1970s, when about 1,200 students attended, said Mike Boutin, ’73, the school’s director of alumni relations. Part of the drop over the decades was due to the “incredible public schools” that offer parents tuition-free education, he said.

Students come from 29 Birmingham neighborhoods, 11 cities in Jefferson County and five counties beyond Jefferson and Shelby – Blount, Chilton, Cullman, Tuscaloosa and Walker, according to the school.

About 76 percent of the students and two-thirds of the faculty and staff are practicing Catholics, and while students of all faiths are welcome, John Carroll retains its Catholic identity, with daily prayers, a chapel available all day long and Mass. Five priests and Dominican Sisters of St. Cecilia are on staff.

A connection to John Carroll is as strong as the ties of kinship for scores of area families, including twin sisters Lee Ann Heaton Fuller of Pelham and Ginny Heaton McMillan of Hoover, who graduated in 1997. McMillan was valedictorian and Fuller was salutatorian. Their mother, Mary Jo Lucia Heaton, graduated from John Carroll in 1970.

Their aunt, Lynda Hayes of Cahaba Heights, didn’t graduate from John Carroll but, “She made up for it by working there,” as the school secretary, Fuller, said.

Fuller’s daughter, Anna Grace Fuller, is a junior who will graduate in 2024 and her son is an eighth grader who will enroll next year as a member of the Class of 2027. Nieces and nephews have attended too.

When she was in high school, John Carroll was a place that “felt like family,” she said.

“You could see the teachers’ relationships, that they had friendships. I always wanted to teach; it’s just the only place I wanted to teach was John Carroll,” said Fuller, who is chairwoman of the school’s Math Department and teaches economics. Her sister is a guidance counselor.

Betty Casmus Gadilhe, ’49, and her family have longstanding ties to the school that stretch over the generations, including all four of her children and most of her grandchildren. The former John Carroll cheerleader has good memories of her two years there.

“There were some great teachers,” Gadilhe said. She said that tuition was $10 a month, and that, for the first time as a student, all her books were new. “It was a great opportunity to get a good foundation for life. It was so nice to be around so many Catholics I could be friends with,” she said.

The Rev. Robert Sullivan, ’82, who is president of John Carroll High School, is another alum whose family has extensive ties to the school. His mother is a graduate, as are his four brothers and 10 cousins, while his niece is a freshman this year.

“John Carroll was a constant presence in all of our lives,” he said.

Some practical things changed for the better over the decades, such as the addition of air conditioning when the new school opened in 1992. The Highland Avenue building never had central air.

Today the school endures, not only as a place, but as “a culture; it is who we are,” he said.

What does Sullivan see for John Carroll and its students in the future?