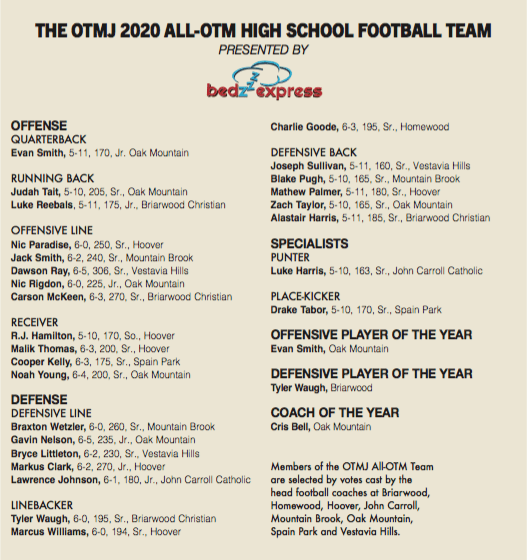 Briarwood Christian senior Tyler Waugh tried to deflect the spotlight, but it shined on him nonetheless.

That’s what happens when you lead the Birmingham metro area with 165 tackles, including 7.5 tackles for losses, make three interceptions, force four fumbles, recover three fumbles and score two defensive touchdowns. And in short-yardage and goal-line situations on offense, you rush for 257 yards and score 13 touchdowns.

“He had an outstanding, fabulous year,” Briarwood coach Matthew Forester said. “He’s a gritty, hard-nosed player who plays the game the right way.

“He was really our team leader, on offense and defense. He worked incredibly hard throughout the year.”

Waugh set the tone for the kind of season he was going to have in the Lions’ season-opening 28-20 victory against Fort Payne, recording 27 total tackles, including 13 unassisted, and scoring two touchdowns.

Waugh gave credit for his superlative season to his coaches and teammates.

“I played well, but it was not a one-way show,” Waugh said. “Our coaches did a great job scheming for our opponents and we were fully prepared for whatever came up when we played. All my teammates did their jobs, helping me do what I did.”

Waugh was grateful that he got to play football his senior season after it was threatened to be canceled because of the COVID-19 pandemic.

“It was a fun season,” he said. “I enjoyed every second of it, especially with everything that happened because of COVID.”

It was the final football season of Waugh’s athletic career. A catcher on the Lions’ baseball team, he is headed to UAB to play baseball.

“I will miss football,” Waugh said, “but in the long run, baseball is better for my future.”

Waugh also excels in the classroom. He has a 4.73 grade-point average and scored 30 on the ACT. He was the Alabama male athletic winner of Wendy’s Heisman High School Scholarship.

Waugh heads up the All-OTM defense that also includes Briarwood teammate Alastair Harris at defensive back.