You are here: Home / Weddings / Spontaneous Wedding: Moving up the Date Almost Made the Planning of a Forest Park Wedding Easier

When Awbrey Golden and Ross Saxon first got engaged, they thought they would have plenty of time to plan their wedding.

The date they originally had in mind was in March 2020. But two months before their engagement party, which they had been planning for Oct. 5 in the backyard of Awbrey’s parents’ house in Forest Park, the couple decided to make a spontaneous change of plans. They started planning for a wedding ceremony there, instead.

“I remember telling my parents, and my mom thought it was a joke,” Awbrey said. “She was like, ‘Ha ha, good one!’”

“We really just wanted it to be simple and all about having fun with our friends and family,” she said. “I didn’t want to get too caught up in the little details.”

They didn’t have to worry about any catering upgrades. She already had booked Shindigs to cater the engagement party before they made the switch; Awbrey said she and Ross are foodies and always “go all out.”

But Awbrey had to find a wedding dress – and fast.

“That was a little stressful, because obviously two months is not very much time to find a dress,” she said. “I knew I had to get it somewhere that would be able to get it to me as soon as possible.”

She and her mom took a weekend trip to Atlanta to visit BHLDN, a wedding shop by Anthropologie. The fourth dress the consultant brought in for Awbrey to try was a dress she wouldn’t have chosen for herself.

Awbrey tried on the dress then stepped out to show her mother, but her mom just smiled and asked Awbrey what she thought about it.

“I thought, ‘Oh, she doesn’t like it,’” she said. “That was my first opinion, because she looked at it and had a grin on her face but didn’t say anything. Then I told her I really loved it, and then she started gushing about it, and we popped some champagne.”

The accelerated timeline meant she also needed to quickly find a florist, but that went smoothly, too.

“Luckily we stumbled upon Wild Things,” she said. “When we sat down with Carolyn (Chen) from Wild Things, she was so organized with all the forms she had ready to go for us to go through every single little detail. We didn’t have to follow up or do much else.”

Awbrey said she felt her wedding was unusual in that it focused on the purpose of the day.

“I just feel like every single time we started to get stressed about something, we said, ‘No matter what happens, at the end of the day we’re going to be married, and that’s what matters,’” she said.

They kept the guest list small, with only about 50 guests. While it was difficult for the couple to decide whom to cut, Awbrey said she and Ross always knew they would want a small wedding.

Although many brides stress about the weather, especially brides who have an outdoor ceremony, Awbrey said she didn’t check the weather forecast at all that day.

“I didn’t even know it was going to rain,” she said. “The whole day, I didn’t even look. I was just having fun and same with Ross.”

She looked out the window as she was getting ready and saw that it was sprinkling outside, and then it shut off. But it started sprinkling again as she started walking down the aisle.

“It made it really peaceful,” she said. “I don’t know why, but as I was walking down, you could hear the sprinkle on the canopy above us. But you couldn’t feel it because there were so many trees in that area.”

As she walked down the aisle, Awbrey said she remembers looking only at Ross.

“He had this look on his face, I don’t know how to describe it, but he looked so happy,” she said. “That’s what I loved about our ceremony; we were so focused on each other. I thought I was going to be so nervous and focused on how I look and how everything’s going and thinking about all the guests and what they’re thinking or whatever. But I was just staring at Ross the whole time. It was just so peaceful. It was perfect. Even through the rain, there was this weird, angelic air around us. It was nice.” 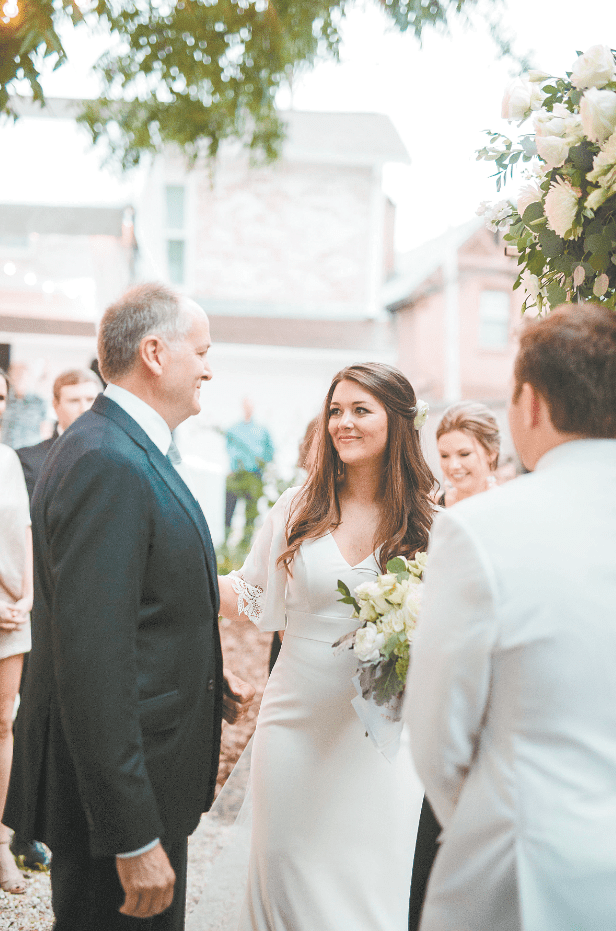 Awbrey said her mother doesn’t have a large family, so it was special to Awbrey that her mother’s cousin officiated the ceremony. He used a ceremony that his father, who was an Old Testament expert and preacher, wrote years before.

“The vows weren’t your typical vows,” Awbrey said. “It had a few different twists on it, which I really liked. And it seemed really perfect for Ross and I.”

Throughout the arbor, bouquets and boutonnieres, the couple asked Wild Things to use white, in-season flowers.

“I really just wanted the venue to speak for itself, because it’s already so green,” Awbrey said. “Carolyn nailed it. She just did a great job.”

The couple did their first dances and were about to cut the cake when the rain really started coming down.

“We went up to our cake and we realized there was someone holding an umbrella over it,” Awbrey said, laughing. “We cut the cake, and then it poured from then on. It was weird walking out of the house and looking at the tables that we had set up with beautiful flowers and linens and everything, and they’re just soaked. Totally soaked.” 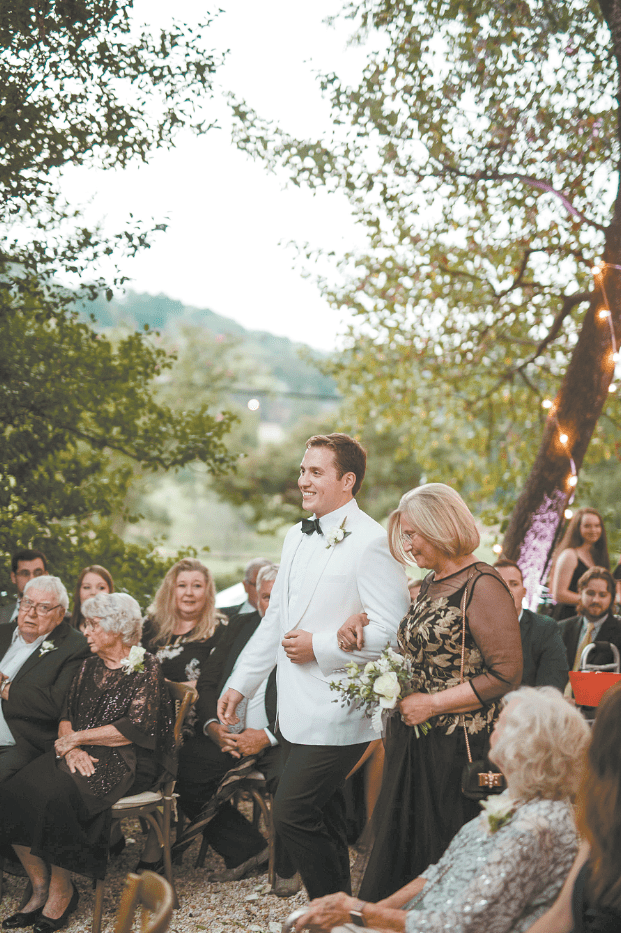 Awbrey said the wet weather was a blessing and a burden at the same time.

“It kept people on the dance floor, which was really fun,” she said.

The couple left at 4 a.m. the next morning to start their Hawaii honeymoon.

The couple now live downtown and have a purchase agreement for a condo that’s being built.