You are here: Home / Features / Food / The Sweet Life: Birmingham Candy Co. is a Start-Up Aiming to Become an Institution

The owners of The Birmingham Candy Co. have a sweet story to tell.

Cassie and Wayne Bolden met at a Halloween party in Savannah, Ga. – an event Cassie almost passed up.

“I don’t really like Halloween and wouldn’t have gone to the party if my next-door neighbor hadn’t been having it,” she said.

Cassie, a Spain Park High School graduate, was living in the coastal city to study interior design at the Savannah College of Art and Design. Wayne had moved from Virginia to Savannah to be near family members.

“While I was looking for work, an owner of a candy company there gave me a job,” Wayne said. “That’s when I found my love for candy. I went from packing and shipping to cooking, sales and processing. I spent 10 years there.”

The couple got married at Hargis Retreat in Chelsea. They moved from Savannah to Hoover, Cassie’s hometown, and launched their candy business in 2015. Although they had already started making plans for their new venture, an experience at their wedding reception sealed the deal.

“When you’re the groom, you don’t get to do much,” Wayne said. “We created a candy table for the reception, and everything was handmade – bite-sized turtles, pralines and praline pecans. I made a ton of stuff. The candy station was empty by the time we got to the reception. And it took me a week to cook everything.” 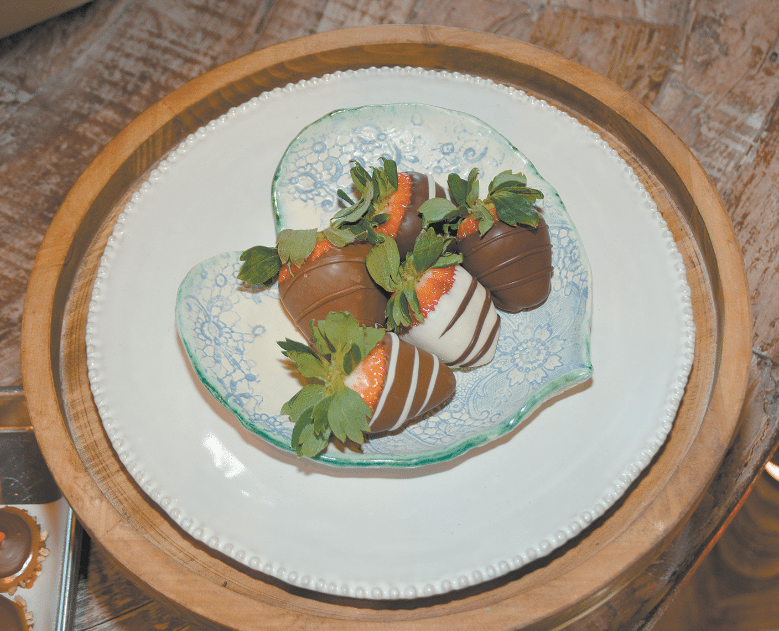 The Boldens said most of the guests had three comments: “The ceremony was beautiful,” “Cassie looked beautiful,” and “Where can we get this candy?”

“We decided to give our candy company a shot,” Wayne said. “We didn’t want to wonder ‘what if’ one day. Cassie started a diligent search for a job so that I could work on logistics. We moved in July and had our first appearance at Pepper Place in October 2015. It was the rainiest day, but we had a big crowd just through word of mouth.”

The company sells its candy at farmers’ markets and pop-up shops, including a temporary store at The Summit this past Christmas season. The Birmingham Candy Co., Leaf & Petal, and Sugarboo & Co. – plus Santa Claus – set up in an empty space to attract holiday shoppers.

“We’ve started a company in an unorthodox fashion, but Birmingham is the perfect incubator,” Wayne said. “There are so many farmers’ markets and festivals. I’ve never seen a town that’s so prideful of itself and that supports local people. Birmingham has a lot of pockets, a lot of suburbs. If you do a traditional business route from the get-go, you’re missing some of those markets.”

Although their fluid business structure has worked well, the Boldens said there’s a perma- nent home in their future.

Wayne said they want a place where customers can not only buy their candy, but see it being created.

“Our ultimate goal is a store in which we can cook in front of you so that you have the full sensory experience,” he said. “With what we do now, that great smell is lacking.”

Among The Birmingham Candy Co.’s treats are a variety of caramel apples, pralines, flavored pecans, peanut and cashew brittle, and their No. 1 seller, caramel squares with dark chocolate or caramel and sea salt.

“For Valentine’s Day, we’ll have apples with heart-shaped sprinkles and pink drizzle, heart-shaped pralines, red velvet truffles added to our six-piece box, and our chocolate-covered strawberries, which are staples,” Wayne said. 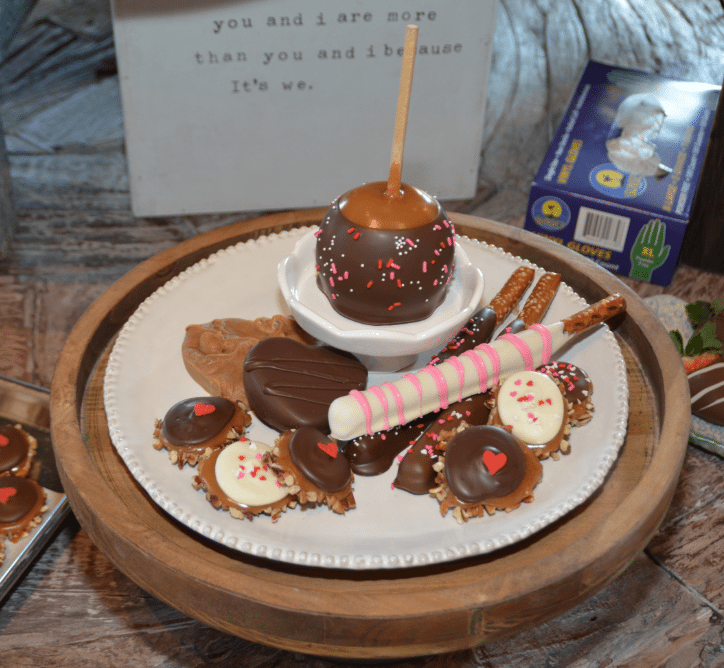 The company also is partnering with Full Pantry, a Birmingham grocery delivery service, to make truffles for a special Valentine gift pack- age.

Wayne is the main cook in the venture, while Cassie’s artistic talent and education have helped with brand creation, marketing and sales.

“We have an informal motto: We stay in our own lanes,” Wayne said. “We live together and work together, and we try to each stay with what we know best. We know what our strengths are.”

Cassie said her husband has “most of the recipes in his head.”

“His caramel recipe is the most prized,” she said. “It has just the right consistency; it’s soft and melts in your mouth. It’s not sticky. We put it on our apples, our caramel squares; we slap that stuff on everything.”

Cassie did change lanes to come up with a new addition to the company’s menu: marshmallows.

“It was summertime, and I wanted a way to use fresh fruits like strawberries and peaches from farmers,” she said. “We take the marshmallows and make S’mores. We have salted caramel marshmallows, strawberry, and birthday cake, and you choose your own kind of chocolate sauce.”

Cassie debuted her creations at Pepper Place using a brûlée torch instead of a campfire to heat up the treats.

“We had a line for them the whole time,” she said. “That was the first time I’d been a short order cook.”

“I love doing the cooking – don’t get me wrong – but I loved Cassie’s idea of adding marshmallows to our repertoire,” he said. “It helps her understand both sides.”

In addition to selling its treats to individual customers, The Birmingham Candy Co. can make weddings a little sweeter. 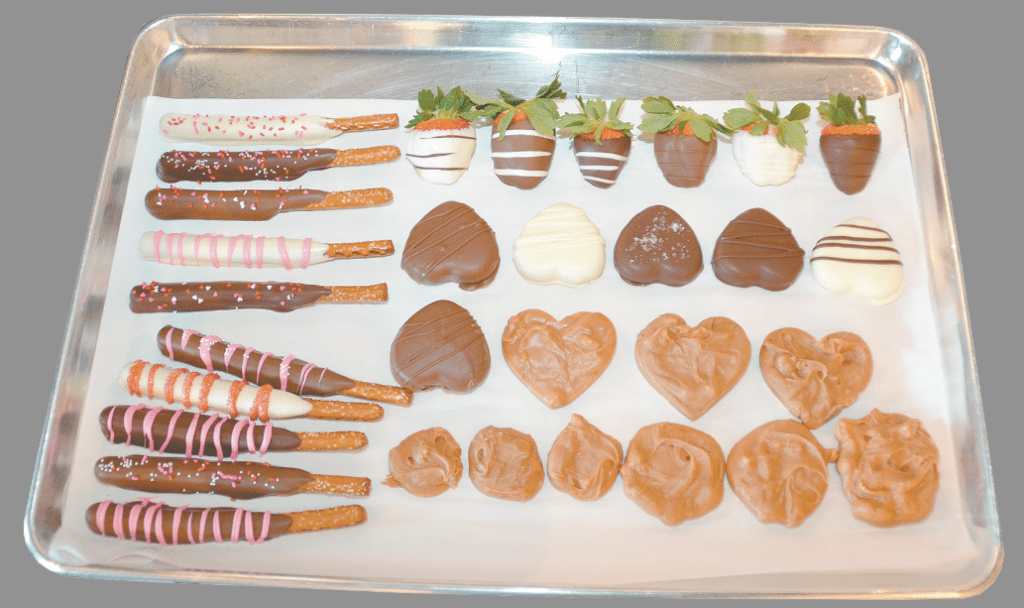 “People see our products and say, these would be great for our wedding,” Wayne said. “We’re more than happy to customize and do what they like. Our mini truffles are great because they’re bite-sized. We make up gift bags as well. We can match colors and themes.”

Deb Warnat, Cassie’s mom, pitches in to help her daughter and son-in-law.

“She’s a professional calligrapher, and she’s used her connections to help us with the wedding industry,” Wayne said.

The company makes strawberries for the honeymoon pack- ages at The Tutwiler hotel, he said.

The Birmingham Candy Company Co. takes on corporate jobs, too.

“The city of Hoover used us for the SEC baseball tournament,” Wayne said. “We made gift baskets for the coaches.”

The Boldens said they couldn’t be happier with the success of their company and the reception it’s gotten thus far.

“Our goal is to be a Birmingham institution,” Wayne said.

The Boldens encourage Valentine pre-orders via the website. Orders can be picked up at the company’s pop-up shops on Feb. 11 from 8 a.m. to noon at Pepper Place Winter Market, Feb. 12 from noon to 4 p.m. at Sugarboo & Co. at The Summit, and Feb.13 and 14 from 11 a.m. to 6 p.m. at the Pizitz Food Hall in downtown Birmingham.