You are here: Home / Events / Bittersweet Inspiration: Stitching History from The Holocaust

On Jan. 27, also nationally known as Holocaust Remembrance Day, nine University of Alabama students traveled to Gus Mayer at the Summit to showcase their designs, which were each based on a Holocaust victim’s sketches.

The fashion show was put on in tandem with the Stitching History From the Holocaust exhibit on display through March 16 at the Abroms-Engel Institute for the Visual Arts. The exhibit, which is visiting from the Jewish Museum Milwaukee, at its center tells the story of a dress designer in Czechoslovakia who tried unsuccessfully to flee to the United States during the Holocaust.

Hedwig Strnad – or as most people called her, Hedy – had red hair, a great sense of fashion and a husband, Paul. Together, they had a hobby of making puppets and putting on shows.

When Hitler’s army invaded Czechoslovakia, Hedy’s dream of becoming a dress designer started to become impossible. Jews were having a difficult time finding any work. The Strnads decided that immigrating to the United States would be their best option, so Paul wrote a letter to his cousin in the States to ask for help in acquiring a visa. He also sent some of Hedy’s sketches along with it to show that she could be employable in America.

“I was very glad to hear that you are troubling to get an affidavit of necessity for my wife as a dress-designer,” the letter said. “Would you be so kind as to let me know if you have had any success in this matter. You may imagine that we have a great interest of leaving Europe as soon as possible because there is no possibility of getting a position in this country.”

Paul also asked his cousin to send him fashion magazines; they didn’t have access to them anymore due to censorship, and Hedy was no longer informed about Paris fashions.

The Strnads failed to get out of Europe and died in the Holocaust. The cousin stored the letters and sketches in his attic, not to be rediscovered until 1997.

Realizing the letter’s significance, the family donated it to the Jewish Museum Milwaukee, which led to further research about the Strnad family. The museum began to put this couple’s tragic story together, piece by piece.

Stamps on the letters were from Czechoslovakia, revealing the Strnad’s home country. Paul didn’t mention his wife’s name in his letter, so the researchers looked for Holocaust victims named Paul Strnad in the Yad Vashem database. Several possibilities resulted, one of them mentioning Hedvika (Hedy). The database showed that a woman named Brigitte Rohaczek provided that bit of information, so the search for Rohaczek began.

Museum officials asked one of their interns, Tyler Grasse, to look for her, doubting that he would actually find her. But within a few days, he found Rohaczek and was on his way to interview her.

Rohaczek was Hedy’s niece and was able to provide personal details about the Strnads.

“They were always laughing,” Rohaczek said in her interview with Grasse. “The whole Strnad family was a very happy family.”

Rohaczk said she would often visit her aunt and uncle’s home in Prague.

“Hedwig had this sort of big room where there were sewing machines, and she’d sew dresses,” Rohaczk said. “And I know when she came to … visit us, she always brought us some nice dresses that we could wear.”

The museum partnered with the costume shop at Milwaukee Repertory Theatre, and together they brought the sketches to life, creating garments that are a reflection of Hedy’s 1939 sketches. The garments, photocopies of Paul’s letters and other facts about what life was like for Jews in the Holocaust make up the Stitching History from the Holocaust museum exhibit.

The exhibit is on display at the Abroms-Engel Institute for the Visual Arts in Birmingham through March 16 and is presented by the Birmingham Holocaust Education Center.

Stitching the History in Birmingham

“The blue was the first thing that drew me to the sketch,” Mancarella said. “But then I noticed the dress part with the pattern and the print. I was like, ‘Oh my goodness. I love it.’”

The final thing she noticed was the fur on the sleeves.

“I noticed it after the fact,” she said. “I thought, now I can make a fur coat or something. I can make that a bigger portion of the garment instead of just being cuffs on a jacket.”

Mancarella’s look was also different from Hedy’s sketch in what was underneath the blue: a patterned pant suit instead of a dress. This presented a challenge for Mancarella.

“Getting the fabric for the pants was a struggle,” she said, laughing. “I ordered it the first time, and it came in the mail from a shop in London, and it took a long time to get here. It came in the mail, and I was excited, and I threw it in my passenger seat on my way out the door.”

She decided to wait to take the fabric out until she got back home. She went to her brother’s house, and while her car was parked, someone stole the package out of her car. This was Dec. 26, just one month before the fashion show.

She found the same fabric on a website based in China, so she canceled her London order and hoped the Chinese fabric would come in more quickly. Four days later, she finally had the fabric in her hands.

While Mancarella was hard at work on her blue outfit, Drake – the student who traded sketches with her – was working on the purple dress.

“I traded for this design because I knew it was the one I wanted,” Drake said. “It’s very interesting to me because of the unique color combination, and I really liked the structure of the coat that she made with the designs and diamonds in it.”

Drake used a heavy wool fabric in the design of the purple dress, similar to the fabric of a peacoat.

“It was definitely a challenge because the top had to be tight enough to hold up all of that weight,” she said. “But at the same time, I had to be able to fit the blouse underneath.”

Inspired by the diamond shapes in Hedy’s sketch, Drake designed a diamond-shaped neckline. To give her model an “old-world vibe,” Drake said she attached a family pocket watch to a chain and let her model wear it as a necklace.

Along with the students’ designs, stylist Tracy James of Chic Made Simple selected pieces from Gus Mayer’s collections to complement each of Hedy’s sketches.

In addition to the Gus Mayer fashion show and the Stitching History from the Holocaust exhibit, there also will be a theatrical production telling Hedy and Paul Strnad’s story on Feb. 17 at the Alys Stephens Center. There also is a talk, “Immigration Then and Now,” March 5 at 6 p.m. at the Abroms-Engel Institute. 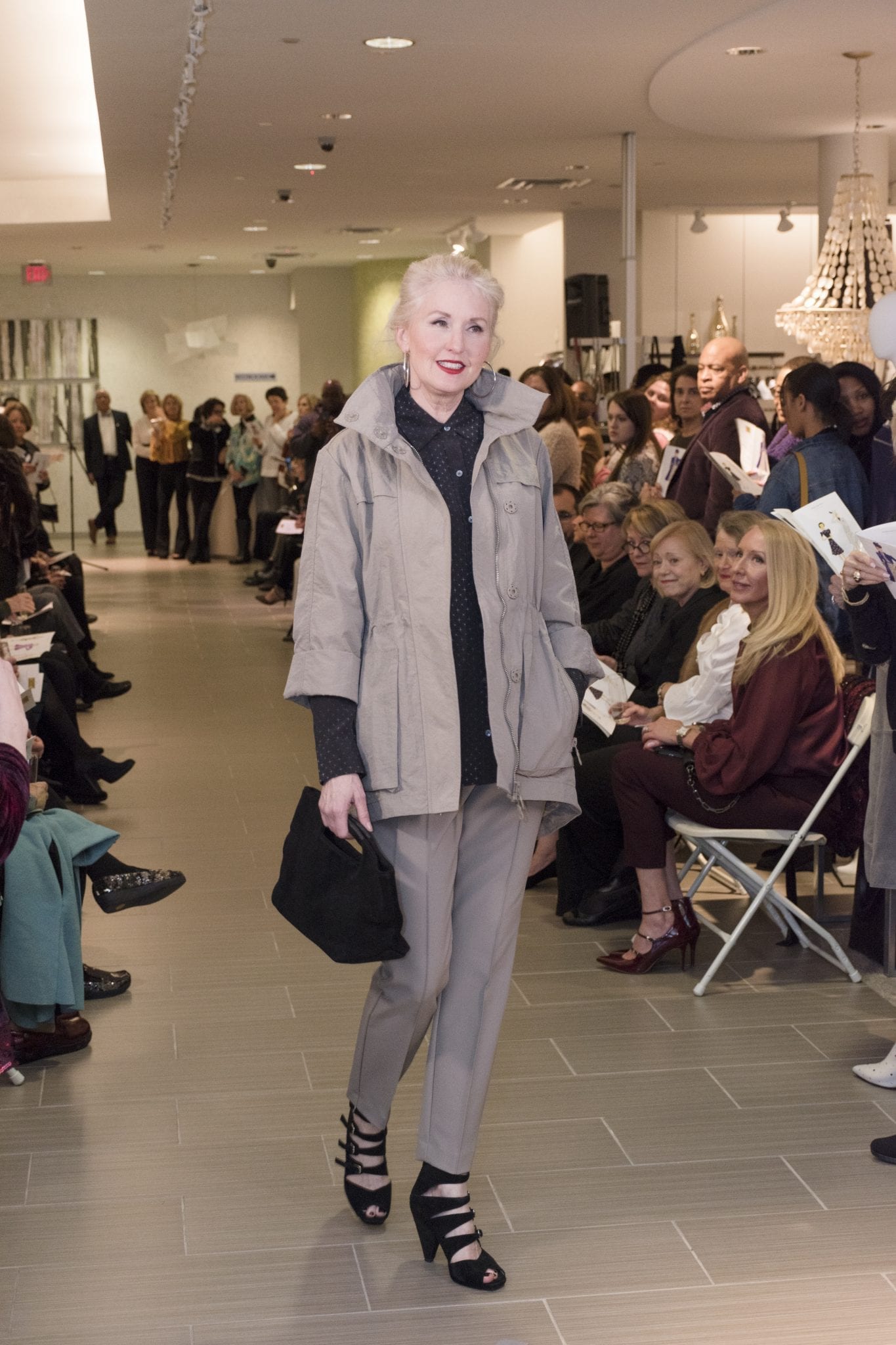 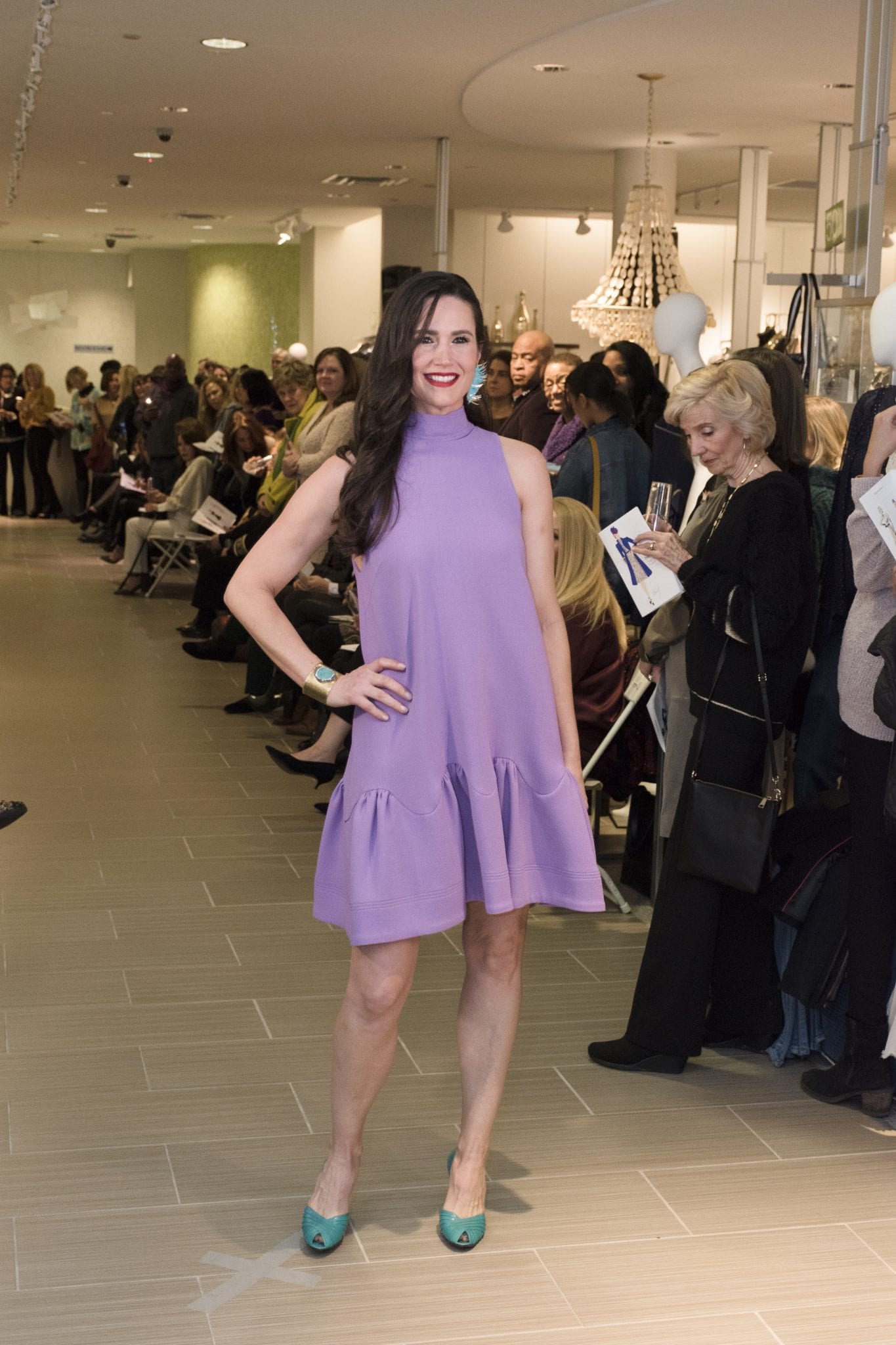 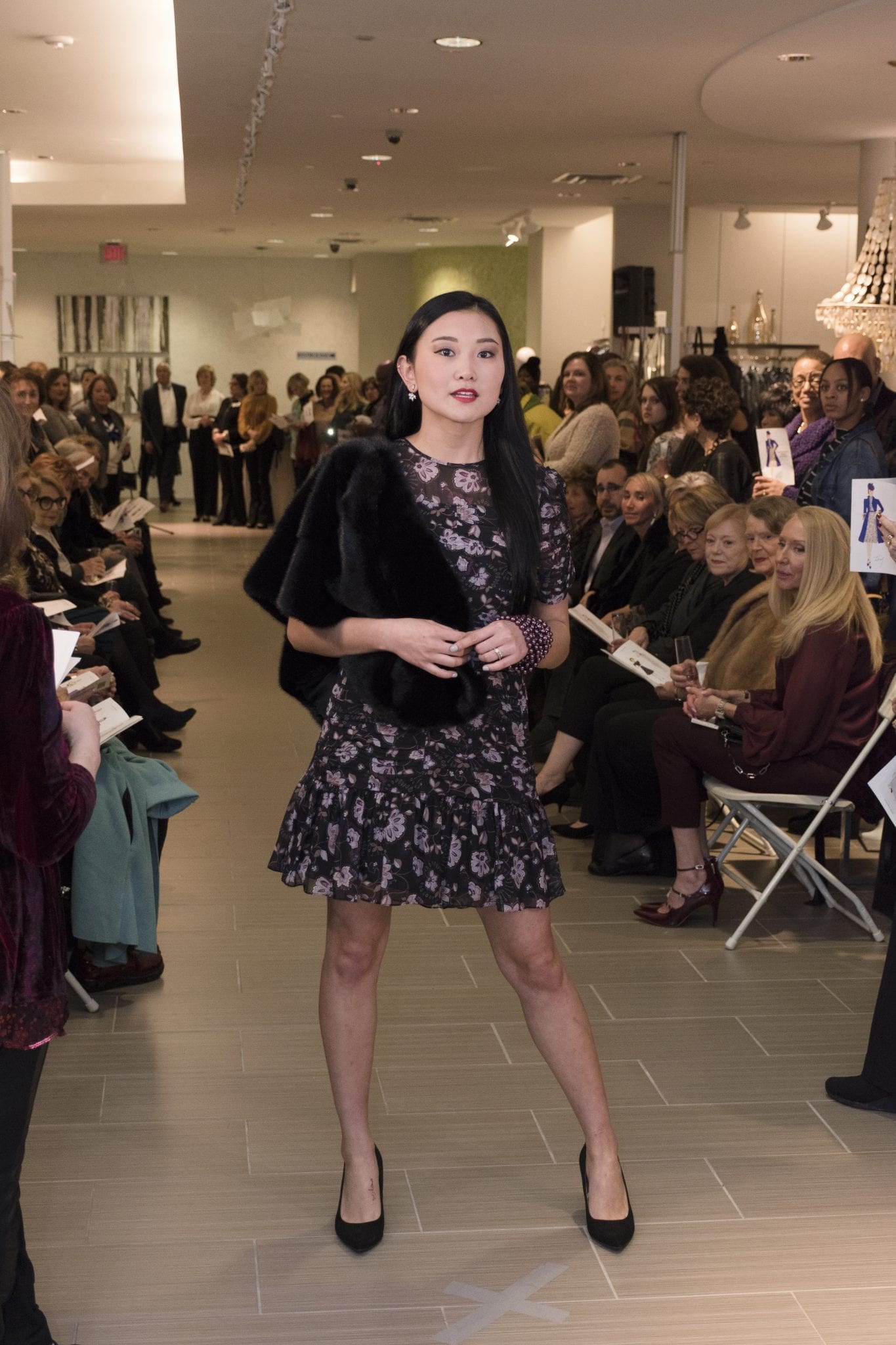 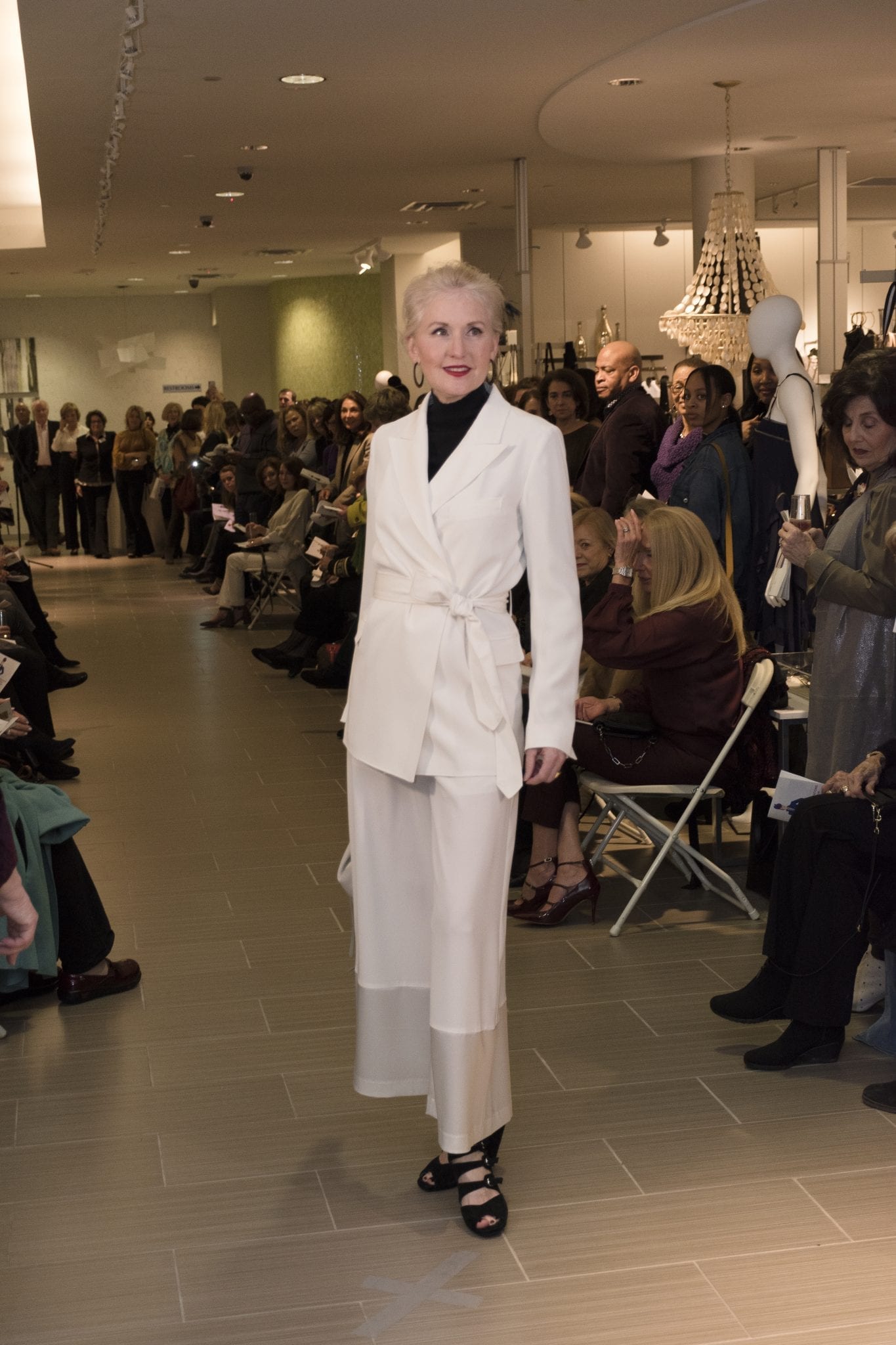 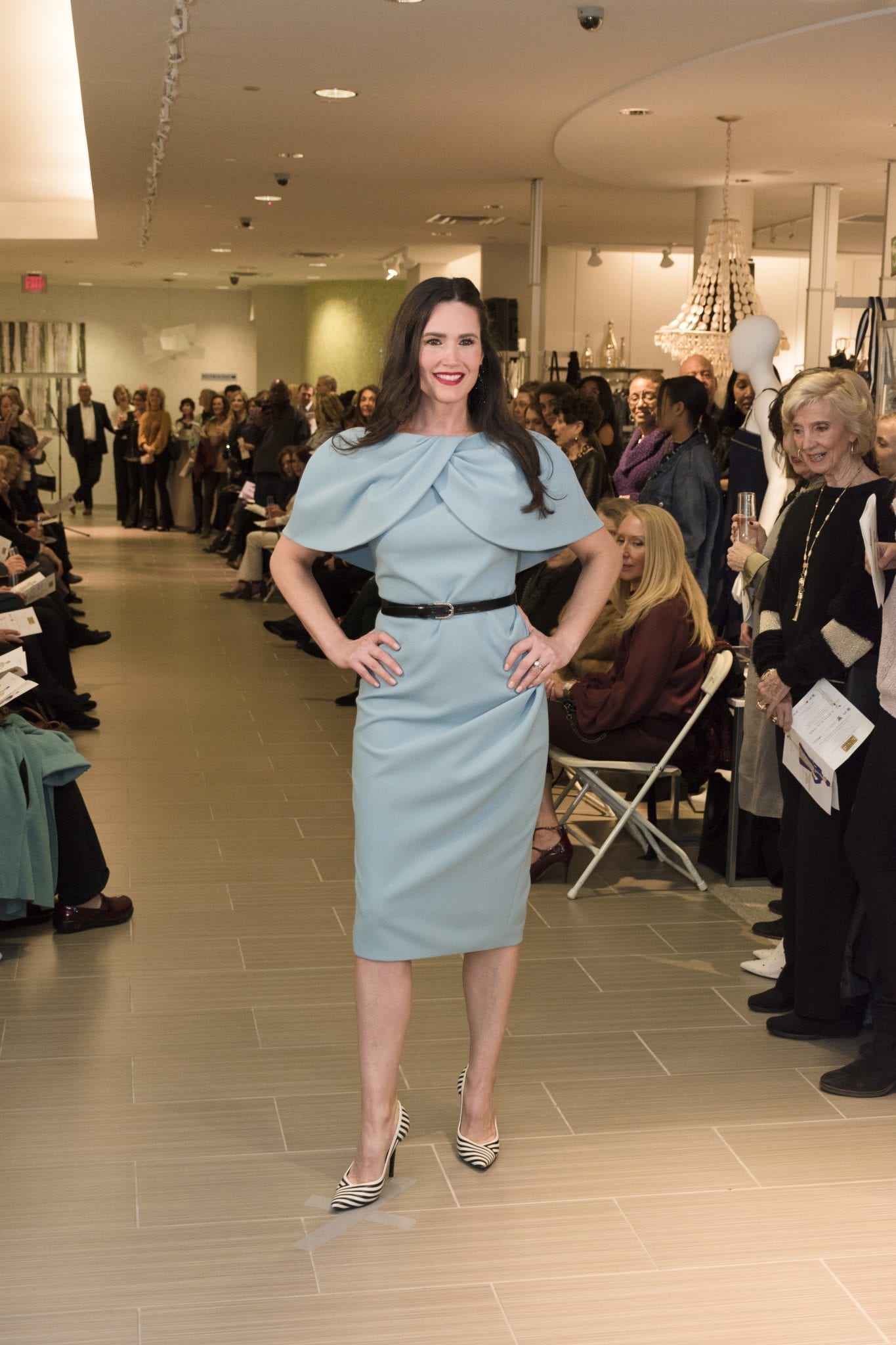 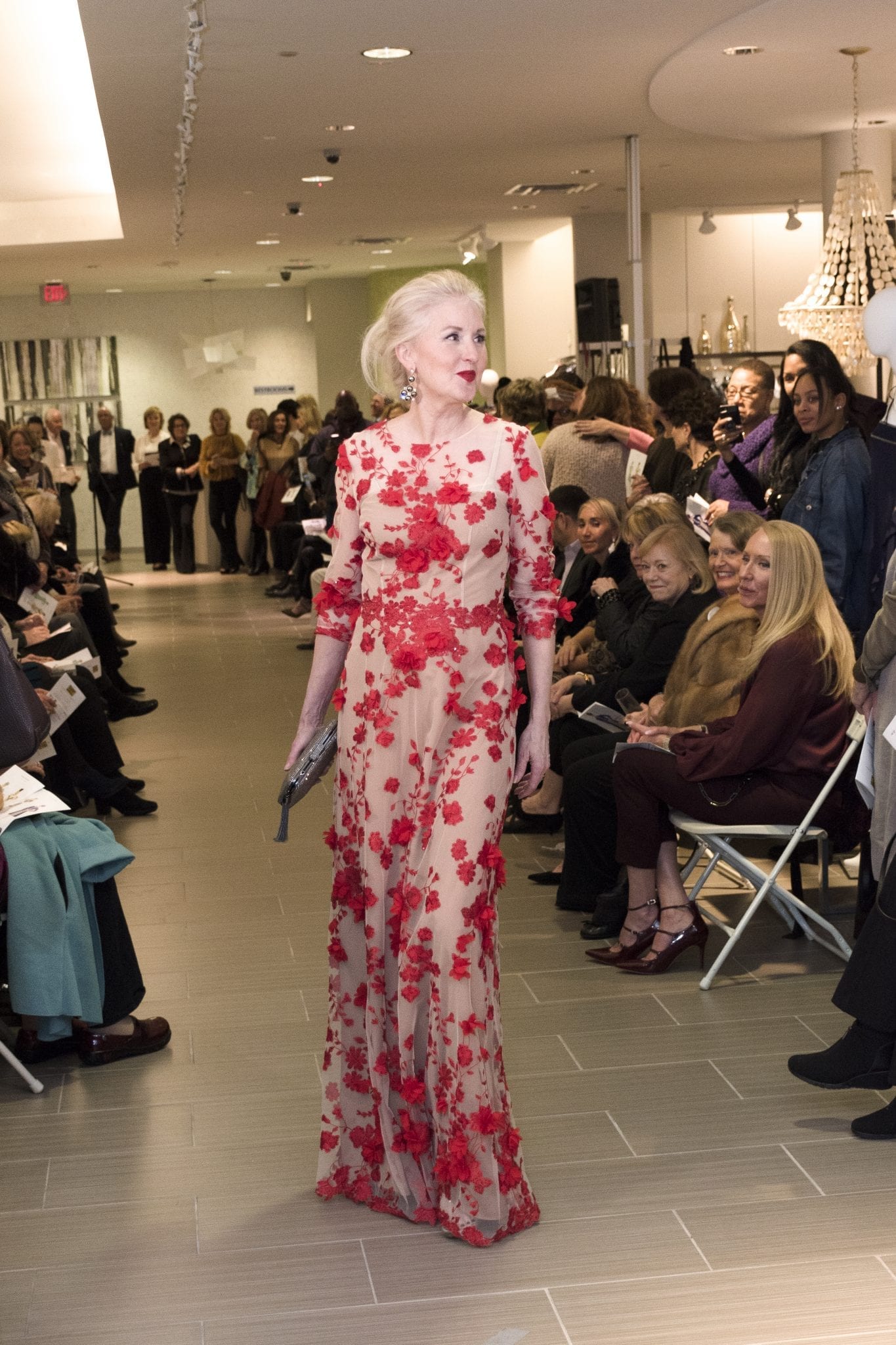 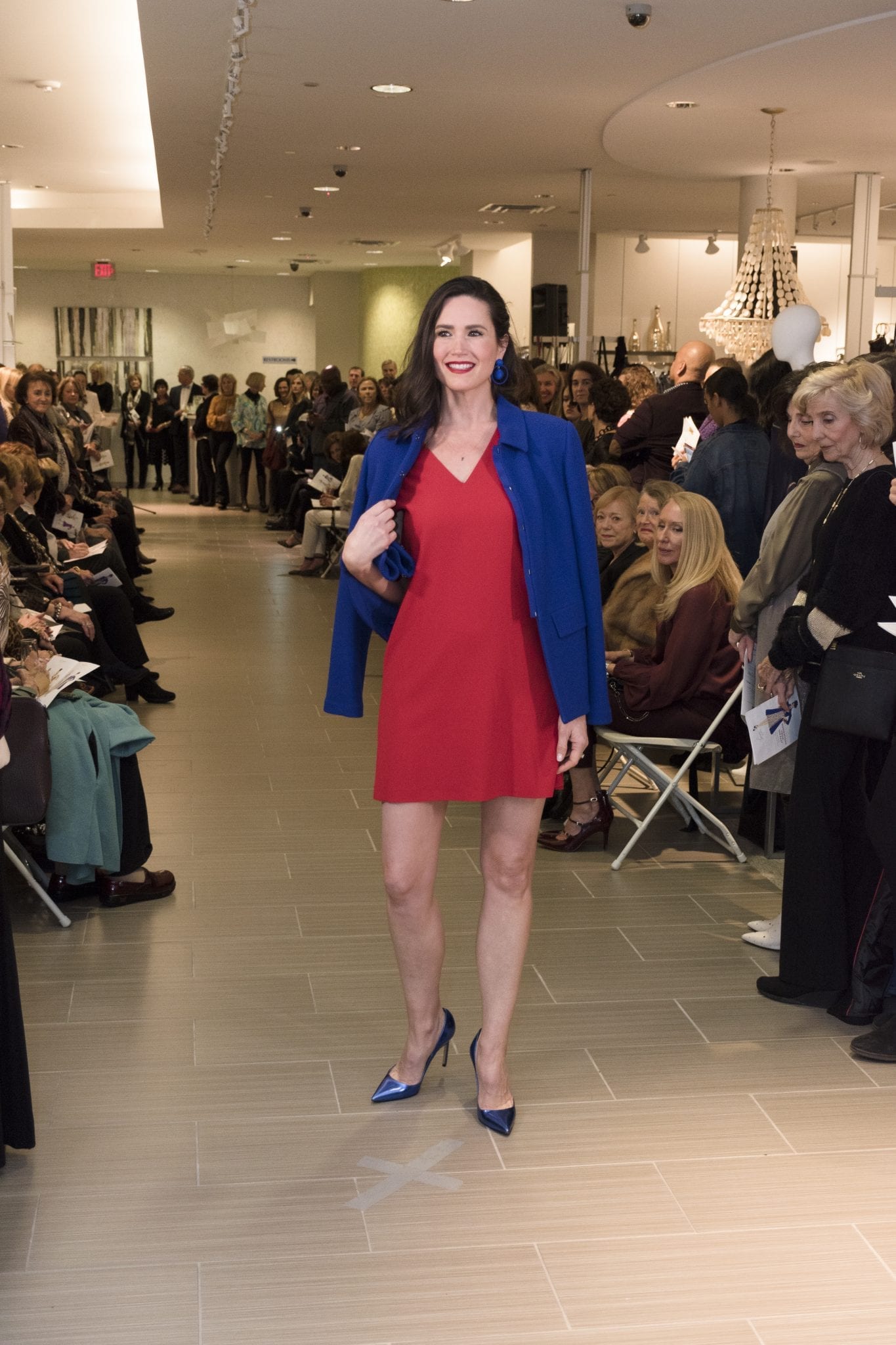