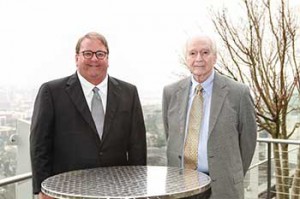 As construction begins on the long-awaited replacement of Mountain Brook Shopping Center, the developers of the project are being honored for their vision.

Construction started on the Lane Parke development in January, and Rele and John Evans were presented with the Robert Jemison Visionary Award at the Mountain Brook Chamber of Commerce’s Annual Luncheon on Feb. 5.

Rele Evans, owner of Evson Inc., along with his son and daughter, John and Sally, are the developers behind the 28-acre master planned development that will include 185,000 square feet of retail, office and residential space. The Grand Bohemian Hotel, with 100 rooms, is also planned for development, along with new luxury apartments.

Evson has managed the 58-year-old Mountain Brook property for several years. The land has a long history in the Evans family.

Rele Evans was a 20-year-old engineering student at Tulane University when he first saw the property where his father, A.A. Evans, planned to build Park Lane Apartments.

“This land has been in our family for years, and we’ve always been mindful both of the special nature of Mountain Brook and the need to ensure that whatever is done here honor the best traditions of the city and of Mountain Brook Village,” Rele said.

Developing Lane Parke has been not been without its challenges, John Evans said.

The first version of Lane Parke was pulled in late 2009 while city officials considered a rezoning request on it. Residents and some retailers said the proposed development was too large in scope and would threaten the existing shops of the village.

In 2010, the city approved a $200 million version of the development, but Evson scaled back the design of Lane Parke due to economic considerations.

“Dad and I started talking about redeveloping the property back in 2006, so it came as somewhat of a surprise that there was so much pushback from the citizens on some of our plans,” John Evans said.

But John said that feedback from the residents and business owners in Mountain Brook helped make sure Lane Parke is a good fit.

“The citizens of Mountain Brook are very proud of their neighborhoods, and they should be. We listened to them, and we think that we’ve finally hit the nail on the head,” he said.

John said it was important to make sure his company developed Lane Parke in a way that is respectful of Mountain Brook’s traditions but at the same time has an eye on the future of the city.

“That’s the difference in developing this property as opposed to a project out on (U.S.) 280. This is right in the middle of the village where so many residents do their daily shopping and spend a lot of time,” he said. “We wanted to make sure that quality of life is maintained and enhanced through this project.”

His family’s connections to the property have also played a role in the careful planning of Lane Parke, John said.

John said his grandfather was a big fan of Mountain Brook and loved the close-knit community.

“My grandfather truly loved Mountain Brook. His house was in Mobile, but he would come up to Mountain Brook at least four days a week. He did that until about a month before he passed away. He’d come up and play golf and visit with friends,” he said.

That community his grandfather loved is both the reason Evson has tried to remain true to Mountain Brook’s traditions and the reason the development has been somewhat controversial at times, John said.

“The charm of how close-knit it is is what my grandfather loved, and it is also the reason the opposition came out so strong to make sure we weren’t going to do anything that would disrupt life in Mountain Brook,” he said.

John said he and his father are developing Lane Parke with a lot of help from trusted professionals.

“This project has certainly gone through several different drafts. It took a lot of professionals a lot of time and effort to get this to where it is now,” he said. “It’s not perfect, but it’s as close to it as you can get without going broke.”

“We’re about a month or so into the first phase now, and it’s looking good. We’re glad to finally be at this point in the project,” John said.

The new one-, two- and three-bedroom apartments will replace Park Lane Apartments, which date from 1948.

John said he is still approached by people who have lived or had family members live in Park Lane Apartments.

“I can’t tell you how many people have told me they lived there or their parents or grandparents lived there. It has been a central part of the community for a long time,” he said. “You don’t hear about very many places with a history like that anymore.”

The first apartment at The Residences should be available by March 2014, John said, and the last apartment should come online in July 2014.

John said he hopes that by the end of this year, the first phase of construction will begin on retail space at Lane Parke, along with construction on the Grand Bohemian Hotel.

“There’s not one facet of this project that stands alone. The inn, the apartments, the retail and office space–it all works together toward giving the citizens of Mountain Brook some really nice amenities,” he said.

With Journal photo by Keysha Drexel