Col. Bob Channon, U.S. Army retired, has been asked many times whether he fought in World War II.

Channon, 95, is old enough to be a member of what some American historians call the “Greatest Generation,” even though he didn’t get the chance to fight in “The Big One.”

“He would have loved to have gone to the war, but he was still at West Point,” said Lyn Culwell, his daughter. “He did go to the wars in Korea and Vietnam.”

Channon volunteered for the newly formed Army Ranger Companies, sent to Korea in 1950-51, and was wounded four different times while leading troops into combat.

In Vietnam from 1971 to 1973, Channon served as the director of territorial security advising South Vietnam’s Regional Forces, Popular Forces and the People’s Self Defense Force.

Channon served 30 years in the Army before retiring. He now lives at Galleria Woods retirement community in Riverchase. He will be recognized for his military service during the kickoff of Hoover’s Thank A Vet Week, which will be Nov. 8, 2-4 p.m. at the Aldridge Gardens’ Pavilion.

The annual week-long event recognizes Hoover residents’ military service while aiming to instill communitywide patriotism, appreciation and respect for all branches of the U.S. armed forces.

This year, the event will recognize the 2020 Hoover Chamber of Commerce Freedom Award recipient, Lt. Col. Ginger Branson, U.S. Army retired, along with five Hoover veterans for their military service, sacrifice and dedication with a flag-folding ceremony. The flags being used were flown over the state Capitol in Montgomery, and the veterans presented with the flags will receive a certificate signed by Gov. Kay Ivey.

Channon will be among those receiving a flag.

“He’s a great man who had a very distinguished Army career and I’m so happy he’s getting to be honored in this way,” Culwell said. “It means a lot to all of us.” 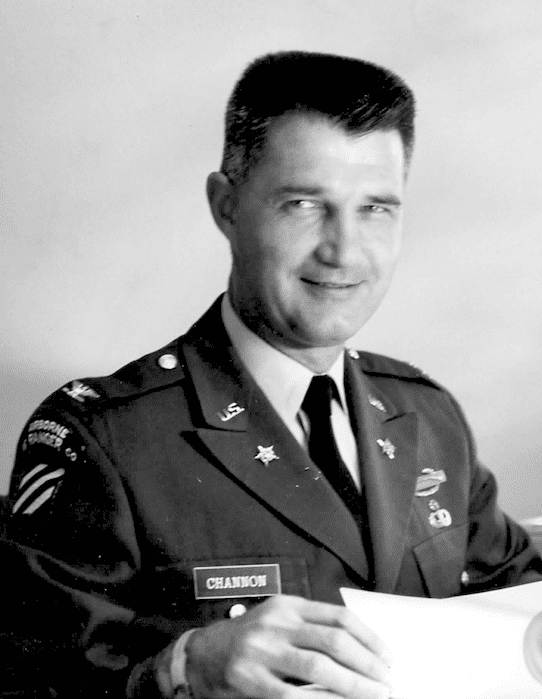 A Life in the Army

Channon was born in Syracuse, New York, and grew up in Norfolk County, Virginia. He graduated from the U.S. Military Academy in 1946. Following graduation from West Point, he completed infantry, parachute and glider schools at Ft. Benning and then joined the 11th Airborne Division in post-war Japan, where as a young first lieutenant he planned and coordinated the out-loading of the division from Japan back to the United States.

After the Ranger units he was part of in South Korea were absorbed into the 187th Airborne Regimental Combat Team in 1951, he planned and coordinated major air drop, air landing and amphibious loading operations, building logistical planning skills he would apply in other assignments throughout his career.

In 1963, as a lieutenant colonel working from the Army War Room in the Pentagon, he planned air-landings of Army forces near three major cities in Alabama. That was in preparation to calm potential civil unrest centered on Gov. George C. Wallace’s Stand in the Schoolhouse Door, blocking two Black students from entering the University of Alabama’s Foster Auditorium.

With presidential approval, the Alabama National Guard was nationalized to prevent the clash of Army and National Guard forces.  With the Guard beyond Wallace’s control, the situation was settled peacefully.

In 1967, Channon was the senior U.S. Army person establishing rapport in Riyadh, Saudi Arabia, during the Six-Day War between Israel and three surrounding Arab nations. His daily visits with his senior counterpart in the Saudi government during this very tense time helped retain diplomatic relations between Saudi Arabia and the United States.

Following his time in Vietnam, Channon was battle staff commander for the CINCLANT Airborne Command Post from 1973 to 1976.

After retirement, he was the second national president of Ranger Infantry Companies, airborne of the Korean War, from 1985 to 1986 and was inducted into the Ranger Hall of Fame in 1996.

At the time of his induction, this was written about Channon: “His leadership shall never be forgotten among the soldiers that he has served with and led during a long and extremely successful career of service to the nation.”

Channon’s wife of 59 years, Carolyn, died in 2013 at the age of 83. He now is confined to a wheelchair because of injuries related to all the jumps he did out of airplanes, including one that resulted in a neck injury. But he will still engage in conversations about his Army career with anyone who has the time to listen.

“He talked to me and my brothers and sister about his time in the military all the time,” Culwell said. “He’s always ready to talk and ready to tell a story. He has even written a few books.”

Have some exciting OTM NEWS? Submit YOUR NEWS
Monday, October 3, 2022