You are here: Home / Latest Posts / Comfort and Joy: Animal-Assisted Therapy Brings Satisfaction to Handlers as Well as Patients or Others in Need 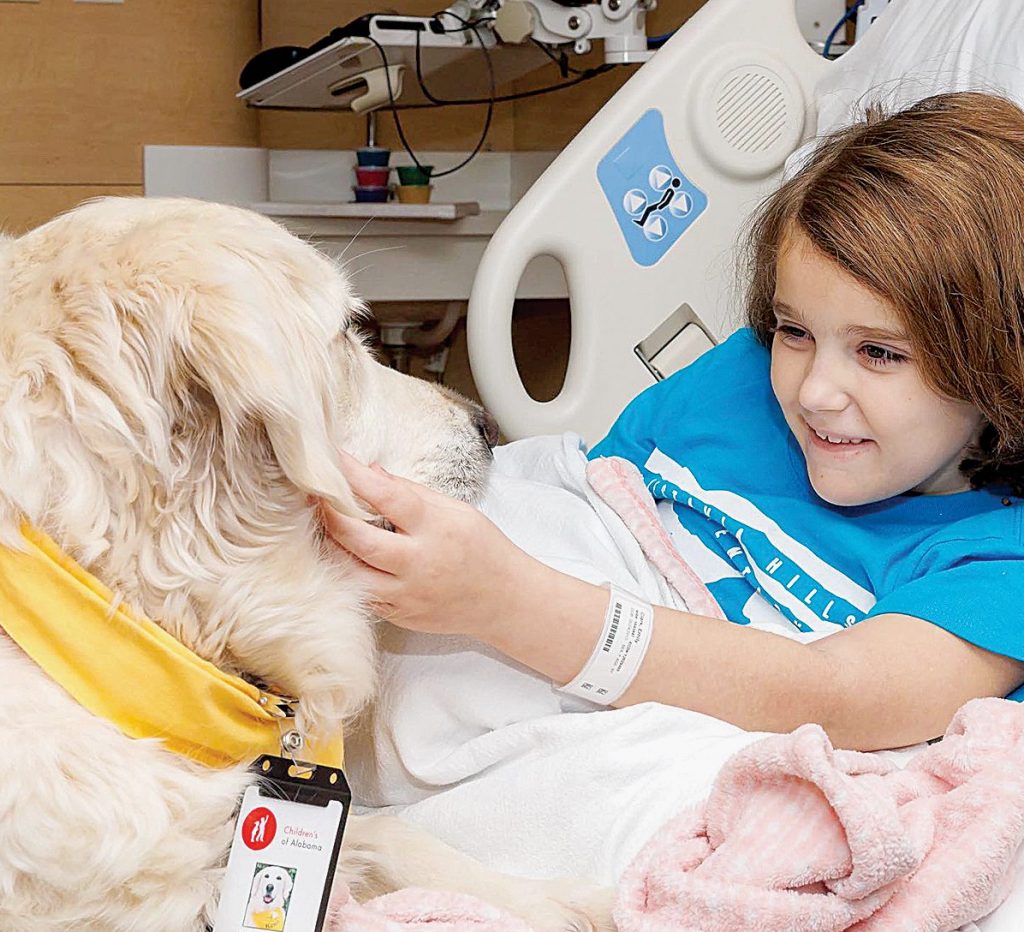 The moment Ronnie McBride witnessed the magical effect of a Therapy Team on a young chemotherapy patient he was visiting at Children’s of Alabama was a decisive one. The handler and dog, he saw, brought comfort and joy not only to the patient, but to the patient’s family, as well.

And for McBride, that brief encounter was all it took.

“From that moment on, I knew then that I wanted to volunteer with Hand in Paw and make a difference in children’s lives through animal-assisted therapy,” he said.

A few years later, a beautiful English cream golden retriever named Kenzi joined McBride’s family, and from the beginning, he sensed something special about her. Could this be the teammate he needed to become a Hand in Paw handler? It wasn’t long before he knew the answer was “yes.”

“Although she’s my fifth golden retriever, Kenzi, by far, has the biggest heart and a shining soul,” McBride said. “Whether an infant or an elderly person, she loves everyone and is always gentle and loving.”

After McBride’s wife picked up information about Hand in Paw at a fundraising event, McBride and Kenzie began the screening process and subsequently completed the steps to become a Therapy Team. Now an Advanced Therapy Team, the two visit Children’s of Alabama regularly.

“After seeing the excitement and smiles she brings to children, I can’t imagine a better way to volunteer my time and resources,” McBride said. “And not only do I get a lot out it, Kenzi does, too. Every time she puts on her HIP scarf, and we pull into the Children’s parking deck, she gets excited and starts whining, anxious to get out of the car and go see the kids.”

Kenzi, said McBride, seems to instinctively know which child is having a bad day or just needs a little extra contact or love.

“I’ve had several people ask me how Kenzi knows to gravitate to a certain child when she’s most needed,” he said. “I really don’t know, but she knows, and that’s all that matters.”

McBride and Kenzi will team up April 23 to support Hand in Paw at the 12th Annual Mutt Strut Dog-Friendly 5K & Fun Run at Homewood’s Central Park. Hosted by Hand in Paw’s junior board, this fundraising day of “families, fun and fur” will allow the organization to continue helping people dealing with emotional and physical life challenges in more than 60 medical centers, schools and human service agencies across North Central Alabama.

“Mutt Strut was canceled in 2020 and held virtually in 2021 due to COVID-19, so we are extremely excited and grateful to host this year’s event in person,” said Brittany Filby, Hand in Paw’s communications director. “The staff is working hard to bring lots of excitement and newness to the race, including revamping the event branding, hosting the race at a new location and coordinating with Magic City Disco for amazing pre-race entertainment.”

Registration for the race is $30; the fun run is $25. Included in the race packet are a race T-shirt and doggie bandana. A $15 sleep-in option is offered for runners who can’t join the festivities but still want to show their support and score some swag.

For more information about Mutt Strut, Hand in Paw and the organization’s other events and activities, visit www.handinpaw.org.

Have some exciting OTM NEWS? Submit YOUR NEWS
Wednesday, July 6, 2022