You are here: Home / Blog / Crestline Village: Crestline Offers It All  in a Compact Space

Crestline Village is one of Mountain Brook’s three main villages, along with Mountain Brook Village and English Village, and features a downtown area built for family walks – with plenty of restaurants, shops and boutiques sure to please kids and adults alike.

This five-bedroom home near Crestline Elementary – listed at $1,699,000 – features four full bathrooms and two half baths, a study with bookcases, and a great room that opens up to the kitchen and breakfast area. The kitchen offers upscale appliances including double ovens, a Wolf gas cooktop, two built-in refrigerators and an ice maker. The master bedroom is private with a sitting area and bathroom with separate vanities and closets. The bluestone patio has a fireplace with limestone seats and a grilling area.
Agent: Jacque Bailey, RealtySouth 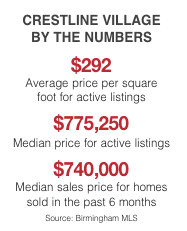 You won’t run out of things to read at this Crestline Village coffee shop, which also sells a handpicked, rotating selection of books. If you’re looking for a quiet space to work or read, venture up to the shop’s second floor. And if you’ve got a sweet tooth, try out its signature chocolate-chip “break-up” cookies.

This family-run Italian restaurant has been located on Church Street, at the center of Crestline Village, since 1988. In addition to serving staples of Italian cuisine – pizza, pasta and hoagies – Bongiorno offers a handful of fresh seafood options, such as lobster ravioli and baby clam linguine.

This local bar and restaurant has been a fixture in Crestline Village for over 20 years. During the day, it serves as a family-friendly restaurant; in the evenings, it transitions to a late-night bar, complete with pub trivia, live music and an always-friendly staff.

If you’ve got kids who need to burn off some extra energy, try the Crestline Tot Lot, located in the middle of Crestline Village. The completely fenced-in playground features swingsets and other play equipment, as well as benches and a picnic tables for parents. 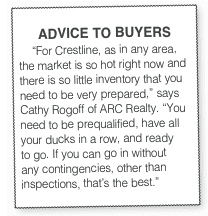 Crestline Elementary School, which has approximately 750 students enrolled in grades K-6 and was named the 12th best public elementary school in Alabama by Niche.com. The school is just a few blocks away from the Emmet O’Neal Public Library, which offers a variety of storytimes and other events geared toward children and families.

See a bit of history at the Cummings-Eastis-Beaumont House, located near Crestline Village on Montevallo Road. It’s been historically designated as the oldest house in Shades Valley, having been originally constructed between 1820 and 1830. The house later served as the Irondale Furnace’s commissary – the first supply store of its kind in the area.

Have some exciting OTM NEWS? Submit YOUR NEWS
Sunday, January 24, 2021