Herb Winches is offering a way to make a small change to your vacation plans – literally.

“Tiny homes are an up-and-coming trend in real estate and design, and these cabin-style tiny homes are unlike anything you’ve ever seen,” said Winches, the Eagles Landing founder and developer. “They provide the opportunity to experience lakefront living without the maintenance or cost of owning a home on the lake.”

According the website thetinylife.com, these little houses are more than just downsized structures. They’re a social movement. 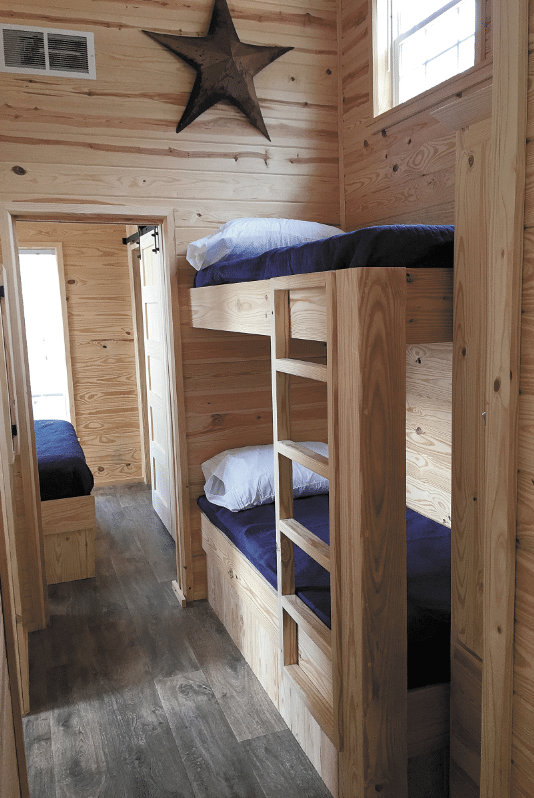 “The typical American home is around 2,600 square feet, whereas the typical small or tiny house is between 100 and 400 square feet,” the website says. “Tiny houses come in all shapes, sizes, and forms, but they enable simpler living in a smaller, more efficient space.”

The Eagles Landing houses may be small in size, but they’ve got plenty to offer style-wise. Interior designer Morgan Holiday custom-designed the floor plans. Each of the three houses has a fully equipped kitchen with marble and granite countertops, a microwave, stove, refrigerator and dishwasher.

Screened-in front porches face the lake. Other features include 13-foot ceilings, a tiled walk-in shower, a flat screen TV and a stacked washer and dryer.

The houses sleep up to four adults. There’s a queen-sized bed in the master bedroom and bunk beds in the hallway.

The 550-square-foot cabins can be rented for four or seven days.

Life on the Water

Winches and his wife, Betty, live in Vestavia Hills but are Lake Martin homeowners, too. Two years ago, he opened a restaurant, The Landing at Parker Creek.

“My house is 200 yards from the restaurant and tiny homes,” he said. “My wife, Betty, and I purchased a house at Parker Creek 15 years ago, and it was the best investment we ever made.

“We’re boaters. Water keeps families together. Our kids still come and bring their friends, who are now adults with children of their own.”

Winches said most rentals at Lake Martin are condos or houses, and there aren’t a lot of them on the market.

“I had a number of people who’d come to the restaurant and say, ‘I’ve got a boat but nowhere to put it and nowhere to stay.’”

Thus, those who rent a tiny home get a free boat slip during their stay at Eagles Landing, plus access to a beach and large swimming area. Each unit has its own barbecue grill and picnic table area.

Eagles Landing also has some special offers for guests, including one hour of playtime on the Tarzan boat during their stay. The Tarzan boat, billed as a floating waterpark, has a 12-foot swing, trampoline and jungle-themed water slide.

Guests receive a $50 food voucher for The Landing at Parker Creek. The waterfront fast-casual restaurant has a definite lake vibe. Its kitchen and bar are made from shipping containers, and there are 21 boat slips for diners who want to travel there via water.

The menu has apps like fried cheese curds and Yucatan Shrimp, a Mexican-style shrimp cocktail. Fried shrimp and chicken plates, burgers and sandwiches are offered along with lighter options such as fish tacos and salads with fresh ingredients from Agricola Farms near Dadeville. Dinner choices include an 8-ounce Duroc pork chop, a flat iron steak and an Agricola Farms seasonal vegetable platter.

The bar has cold craft beers on tap, including Angry Orchard, 30A and Shock Top.

Winches said he became aware of the tiny home movement even before HGTV helped popularize it with shows such as “Tiny House Hunters” and “Tiny House, Big Living.”

“I’d been exposed to tiny homes and developed a relationship with a manufacturer in Hamilton, Rustic River Park Homes,” he said. “I wanted to do business in the state of Alabama, and I got to know the owners. I found them to be wonderful people.

“My wife designed the homes, and the decorator is a friend of the family who’d visited our lake house.”

To find out more about Lake Martin’s tiny home community or to book a stay, visit eagleslandinglakemartin.com. Weekend and weeklong packages are available.

This 44,000-acre reservoir is so big it’s in three Alabama counties: Coosa, Elmore and Tallapoosa. Alabama Power Co. and Russell Lands own most of the 750 miles of wooded shoreline.

The reservoir was created by the construction of Martin Dam, which began in 1923 and lasted until 1926. At the time, the lake was the largest manmade body of water in the world, and it’s still one of the biggest manmade lakes in the United States.

Throughout the year, areas around Lake Martin hosts special events. Next up is the Alexander City Jazz Fest, set for June 6-10 in downtown Alexander City and at the Lake Martin Amphitheatre, and the Fourth of July Blast with a fireworks show. For more information on these and other events, visit theamponlakemartin.com.

Have some exciting OTM NEWS? Submit YOUR NEWS
Thursday, June 30, 2022