You are here: Home / Business / Edgewood: Local Village Inside of Homewood 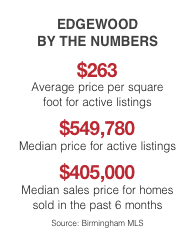 When it originally was founded in 1920, Homewood was called Edgewood. Seven years later, the town expanded and was renamed; now, Edgewood is the name of a community that was described by AL.com in 2016 as “arguably Homewood’s most desirable neighborhood.”

With the exception of a business district along Oxmoor Road – which includes restaurants, an antiques store and other small businesses – Edgewood is mostly a single-family residential neighborhood known for its walkability, older architecture and highly ranked schools.

Walk to Edgewood Elementary and Homewood Middle schools from this new home, listed at $775,000, by Twin Construction. The home features a master bedroom on the main floor with a marble tile bath, a custom cook’s kitchen with marble counters and Jenn Air appliances. Custom designer lighting is found throughout the home, along with white oak flooring. Nine-foot ceilings are on upper and lower levels, as well as Monarch wood windows. Three bedrooms upstairs include walk-in closets up. For huge energy savings, the home utilizes spray foam insulation and a tankless water heater. Agent: Barbara Wheeler, LAH.

This self-described “old-fashioned pizzeria” has been serving Italian fare in Edgewood for more than 30 years, including a variety of pizzas, calzones, pasta and sub sandwiches. If its location at the center of the Edgewood Business District isn’t convenient enough, New York Pizza offers free delivery in the Homewood area.

It might be hard to find a seat during peak hours, but it’s worth dropping into the original location of Saw’s BBQ, which has expanded to three other Birmingham-area locations since opening. Why try this one? It’s the only brick-and-mortar location that regularly offers Saw’s trademark ribs. Don’t worry if you can’t find a seat – it’s worth the wait.

Beat the heat with this conveniently located ice cream shop, which last year was named one of the best ice cream parlors in the state by Best Things Alabama. Edgewood Creamery features a wide variety of ice cream flavors and toppings. If that’s not your style, you can also choose from a variety of pies, cakes, smoothies, milkshakes, snow cones and malts.

Located just off Oxmoor Road, Edgewood Elementary School boasts an enrollment of just more than 800 students and has recently been ranked as one of the top 25 public elementary schools in Alabama by Niche.com. Also nearby is Homewood Middle School, which has roughly 900 students and was ranked the second-best public middle school in the state.

Located within walking distance of the Edgewood Business District, the Sims Gardens might look at first like a normal house, albeit one with very well-tended greenery. But the five-lot property is actually a community park donated to the city of Homewood by the late Catherine Sims, who was often referred to as the “Plant Lady of Edgewood.” Overseen by Birmingham-Southern College’s Southern Environmental Center, the gardens feature a greenhouse; edible plants such as blueberries, figs and muscadines; and a courtyard that doubles as an event space, which has been known to host events such as jazz concerts, cocktail classes and garden parties.