One of Homewood’s favorite eateries soon will share quarters with a new culinary kid on the block. But there’s only friendly competition here, because both restaurants have the same “parents.”

Andrea and David Snyder needed more room than their Urban Cookhouse at 2846 18th St. South in Homewood could provide. That store, which opened in 2010, was the original UC.

“We felt like we’d capped out on what we could do with sales at our Homewood location,” Andrea Snyder said.

When a large building just a few blocks away, at 1920 29th Ave. South, became available, the Snyders made the decision to move. But they were attracted by more than just the size of the building, which recently housed Classic Wine Co. and, before that, a bank.

The building actually had more square footage than Urban Cookhouse needed, so the Snyders decided to launch another eatery in part of the space. Farm Bowl + Juice Co. will be a healthy-food concept, serving acai bowls, oatmeal bowls, cold-pressed juices made in-house, smoothies and coffee.

“We think this is the perfect complement to Urban Cookhouse,” Snyder said. “Farm Bowl will open at 7 a.m., and Urban Cookhouse has more of a heavy lunch and dinner crowd.”

She knows not everyone is on a first-name basis with acai, a berry grown only in Brazil. The nutrient-packed fruit – it’s pronounced “ah-sah-EE” – is known as a superfood because of its antioxidant qualities.

“When we traveled, we saw acai bowls in places like Nashville and Atlanta,” Snyder said. “We feel like our timing is right.”

At Farm Bowl, you pick your base — açaí or oatmeal — and then choose from a long list of ingredients, including fruits, grains, seeds and nuts.

Lauren Weekley, who helps with Urban Cookhouse’s marketing and with systems development at Farm Bowl, said Farm Bowl will simplify the ordering process for those unfamiliar with acai bowls.

“Our menu is laid out in a way that makes it easy to order,” she said. “The ingredients are listed on the menu. You pick your base and then pick your toppings.”

If you’re not feeling confident or creative about ordering, Farm Bowl will have several suggested combinations.

“We’ll also have oatmeal bowls – you can get the oatmeal hot or cold – with our own custom overnight oats, whole food smoothies and cold-pressed juice,” Snyder said. “The focus is all plant-based; we don’t have any animal products. Eating this way can be fun and easy. We want people to know that you can achieve specific benefits through the food you eat.”

“We’re using the same farmers as we do at Urban Cookhouse whenever possible,” Snyder said.

“We’ll have Seeds Coffee; we’ll be one of their first wholesalers. Our honey is from Eastaboga Bee Co.”

Farm Bowl will have kombucha – fermented tea – from Harvest Roots, another Alabama company. 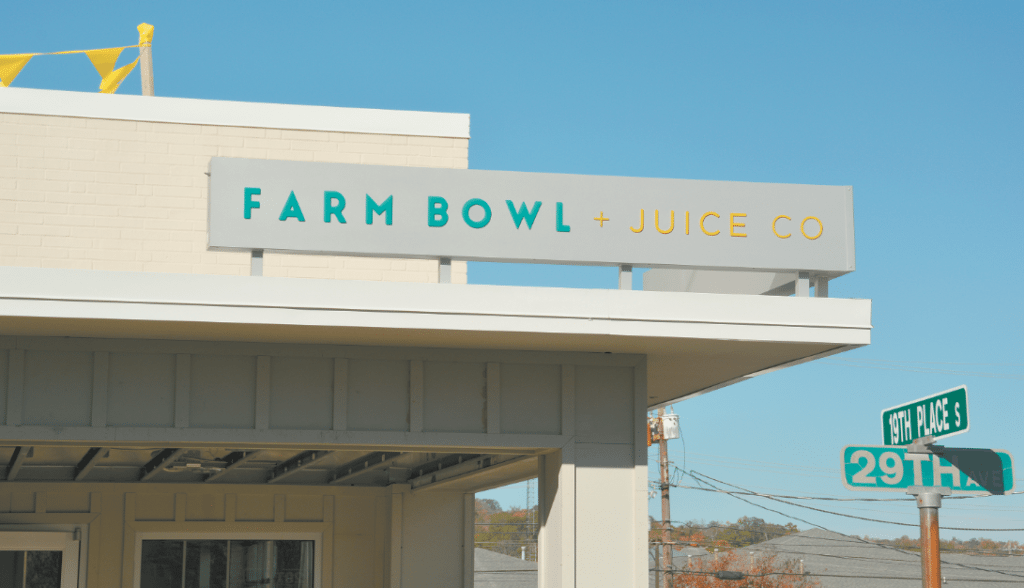 Also like Urban Cookhouse, Farm Bowl caters to kids as well as grownups. The UC menu has children’s options listed under “For Cool Kids.” Farm Bowl’s younger customers will be “So Fresh” kids.

“We’ll have ‘So Fresh’ T-shirts and special packaging and sizing for children’s food,” Snyder said. “If you’re a mom, there’s no reason to think, ‘I’ve got to go to one place for me and to another place for my kids.’”

Farm Bowl will implement UC’s autism-friendly program, working with KultureCity, a Birmingham-based nonprofit organization that promotes acceptance and inclusion for those on the autism spectrum. Weekley handles all the employee training and compliance for the restaurants’ program.

“We are the first restaurant chain to become sensory inclusive all the time,” Snyder said.

Urban Cookhouse and Farm Bowl will share the same drive-through window. Except for drinks, you’ll need to call ahead to place orders. The restaurants soon will have online ordering, too, Snyder said.

Siblings, But Not Twins

Of course, not everything is the same. Besides their menus, the restaurants have another difference: their appearance.

“Urban Cookhouse is earthy and homey,” Snyder said. “Farm Bowl will be all white with pops of color.”

Inside the new restaurant, watercolors of a carrot, a beet and a pineapple will brighten the whitewashed walls. Bins will hold fresh fruits and vegetables, and seeds and oats will be on display in clear canisters.

Farm Bowl has about 30 seats inside plus a porch, where a graphic wall will be the perfect Instagram backdrop. The outside space also will have swings – honest-to-goodness individual swings, not porch swings.

Snyder said Farm Bowl should open near the end of December.

“This is what Urban Cookhouse is supposed to be. You’re supposed to be able to move and feel at home. This will give us the kind of experience we want for our customers.”

She said there should be only two or three days of downtime between the closing of the old Urban Cookhouse and the opening of the new one.

The Snyders also own Urban Cookhouses at The Summit, in downtown Birmingham and in Tuscaloosa. Snyder said they are keeping the place on 18th Street South, where their successful venture started.

“It’s real special to us,” she said. “The basement there is where I told David that I was expecting Ruby and where we celebrated anniversaries. There’s a little plaque on the counter there that says, ‘I will give you the confidence to follow your dreams.’ That was my wedding vow to David.”

Don’t be surprised to see the old restaurant filled by another food concept from the Snyders.

“We’re looking at options,” Snyder said. “We love that space, and we love Homewood for supporting us.”

The new Urban Cookhouse and Farm Bowl + Juice Co. are at 1920 29th Ave. South in Homewood. For more information, visit urbancookhouse.com or follow both restaurants on social media.

Have some exciting OTM NEWS? Submit YOUR NEWS
Friday, June 24, 2022