Friends of Kali Martin McNutt and François Braine-Bonnaire could have been traveling to Louisiana last summer to the couple’s wedding.
Instead, some 60 American family members and friends ended up adding a few extra miles to their journeys.

Kali, who is from Vestavia Hills, and François, a native Parisian, married June 28 in the South of France.
“We both love New Orleans and thought about getting married there,” Kali said. “But the only venue in New Orleans that we would have wanted is the Marigny Opera House, and it only does celebrity weddings now.”
During a family trip to Orange Beach, Kali’s mother, Pam McNutt, helped the couple reach a decision.
“Mom asked, ‘What do you really want to do?’ and I told her I really wanted to get married in France,” Kali said.
Kali and François met in 2008, when Kali, then a recent University of Alabama graduate, was an intern at a small public relations firm in France.

“I was living in Chantilly, and I’d go to Paris on the weekends,” she said. “We met at a bar that’s not there anymore.”
In October 2010, François moved to Washington, D.C., where Kali was director of External Affairs at the Foreign Policy Initiative, a D.C.-based think tank. François is an entrepreneur working in advertising and real estate investment.
They got engaged in Paris in August 2011 in the Place Vendome at a restaurant which, appropriately enough, incorporated houndstooth into its décor.
The couple now lives in Tampa, Fla., but likely will move to Birmingham soon, Kali said.
Kali and François considered getting married in Bordeaux, the home of François’ late mother. They ended up choosing the sunnier and more convenient Côte d’Azur.
“It was close enough to Nice to make traveling easier,” Kali said.
Another key decision was hiring wedding planner Kerry Bracken of Lavender and Rose Weddings in Cannes, France.
“She caters to Anglos getting married in the South of France,” Kali said. “She got married there and lives there now. It was essential to have a native English speaker on the ground.”
French weddings typically aren’t as well-organized or elaborate as most American weddings, Kali said.
Bracken found a Catholic church that would allow Protestant ceremonies, almost unheard of in France. The church, L’Eglise St. Blaise in Valbonne, was founded in 1199, predating the village by 320 years. Bracken also found a bilingual British minister to officiate at the ceremony.
The couple had to put a lot of trust in their planner since, as Kali said, it would have been impossible to pop over for a food tasting or to listen to musicians. But back home in the United States, Kali and her mother were busy with other wedding elements.
“Finding her wedding dress was the first thing Kali did,” Pam said.
Before having a venue or a wedding date, Kali chose Monique Lhuillier’s “Candice” dress at Carine’s Bridal Atelier in Washington, D.C., and Manolo Blahnik flats. François wore a morning suit.
“At first I thought I’d let the bridesmaids choose what they wanted to wear,” Kali said. “But then I got in bride-mode and ended up picking out some dresses at Bella Bridesmaid in Homewood to give them examples of the mix-and-match feel I wanted. All but one of the bridesmaids chose Amsale dresses in different fabrics, colors and cuts.”
Kali and her mother sent pictures of the Valbonne church to Birmingham artist Bob Moody, a good friend of Kali’s late grandfather, Billy Martin. Moody is well known for his two books featuring watercolors of English and Alabama churches.
“He did a painting of the church which we used on the wedding invitations, programs and the coasters we gave to guests,” Pam said. “He gave the painting to Kali and François as a gift.”
Calligrapher Katie Decker Hyatt of Atlanta-based Signora e Mare created the formal hand-deckled invitations, the menus and the wedding crest.
The crest incorporated an elephant as a nod to Kali’s UA allegiance, a frog as a playful symbol of François’s French heritage, lavender to represent the South of France, and cotton for Alabama.
Since many of the bride’s guests would be traveling long distances, Kali and her mom wanted to make them feel welcome. Bags in guests’ rooms held a jar of olive tapenade, antique French postcards, a bottle of rosé, Ladurée marshmallows, and canelés, the rum and vanilla cakes that are the traditional sweet of Bordeaux.
The couple also created an extensive website with plenty of information about travel, hotels, restaurants and points of interest.
“Americans care if guests have fun and feel comfortable,” Kali said. “The French don’t so much.”
On the night before the wedding, Kali’s grandmother, Mary Ann Martin of Birmingham, hosted a glamorous party at Juan-les-Pins near Cannes. Guests dressed in white and gathered on the seaside for a soiree blanche – an all-white party.
For the Friday night event, Kali wore an outfit from Laney’s Place in Homewood with Prada shoes.
At the wedding ceremony, Kali’s father, Don McNutt, escorted her down the aisle. Her matrons of honor were her sister, Molly Morrison of Birmingham, and her cousin, Lindsey Vansant of Hoover. 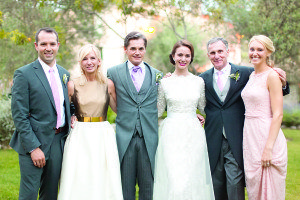 Other attendants were Elizabeth Bowie and Margaret Ann Head, Kali’s roommates from UA; childhood friends Leslie Brogan and Rachel Wells Brooks of Birmingham; college friend Allison Burg Scully from Mountain Brook; and Alicia Catherine, a post-college friend.
Among François’s attendants were his nephew, Raphaël Braine-Bonnaire, and his soon-to-be brother-in-law, Clay Morrison of Birmingham.
Kate Martin, daughter of Kali’s cousin, Hunter Martin, and his wife, Kelly, of Vestavia was the flower girl. The bell ringers included Daniel Vansant, son of matron of honor Lindsey Vansant and her husband, Aaron. Readings and music for the ceremony mixed formality and fun. The prelude included Edith Piaf’s “La Vie en rose” and the Rolling Stones’ “She’s a Rainbow.” The bride entered to Pachelbel’s traditional “Canon in D,” while the groom, groomsmen and minister came in to “A Whiter Shade of Pale” by Procol Harum.

One reading was 1 Corinthians 13, while another came from the movie “When Harry Met Sally.”
The couple remembered François’ late mother and father with flowers at the places where they would have been seated in the church.
After the ceremony, wedding party members and guests were given handkerchiefs for a New Orleans-style celebration, complete with a jazz band.
“I always wanted to have a second line at my wedding,” Kali said.
Second line is a tradition in New Orleans brass band parades. The “main line” or “first line” is the parade’s main section, while those who follow the band with handkerchiefs or umbrellas are the “second line.”
Buses took guests to the McNutts’ home away from home, the Bastide St. Mathieu, an 18th century manor house and private villa in Grasse. Poolside hors d’oeuvres and drinks were followed by an elegant dinner at candlelit tables filled with peonies.
“Each table at the dinner was named for a place we had traveled or lived,” Kali said.
In addition to the American visitors, about 60 French guests attended. François has three older brothers, all of whom live in Paris. Guests also came from Mexico, Argentina, Australia and Germany.
The dinner menu included caramelized onion tart with red mullet, pistachio and marjoram oil, and dandelion leaves with balsamic dressing and herb-crusted rack of lamb, potatoes with truffle oil, layered Provençal vegetables, garlic confit and thyme jus.
After that came baguettes and époisses, which Kali and François called the “stinkiest and tastiest French cheese,” plus a dessert buffet and macaron tower.

“We had an absinthe bar because we were drinking absinthe the night we met,” Kali said.
A cocktail bar featured French 75 cocktails made from gin, champagne, lemon juice and sugar. Jager shots were reminders of party times at the University of Alabama, Kali said – as was the playing of “Sweet Home Alabama,” punctuated with plenty of hearty “Roll Tide Rolls” from the Bama fans who attended..
“That was per my mom’s request,” Kali said.
On Sunday, guests returned to the Bastide St. Mathieu for a Bloody Mary bar, burgers served from a French food truck and bluegrass music.
After the wedding weekend, many family members and guests traveled to Spain, Italy, Belgium, Switzerland and England.
The newlyweds and Kali’s family visited Normandy, which was a birthday wish of Kali’s dad.
“I guess you’d say we had a ‘family-moon,’” Kali said.