But height alone doesn’t allow Essix to dominate. She has athleticism and skill.

“For a girl her size, she’s a phenomenal athlete,” Hoover coach Chris Camper said. “She’s explosive and she jumps out of the gym, but she’s a very skilled player, a dynamic volleyball player with great hands. No one in the state has the potential to take over a match like her.”

Throughout this season, Essix has done just that. Last week, she helped Hoover win the Class 7A North Super Regional championship at the Von Braun Center in Huntsville. The Bucs advanced to the Alabama High School Athletic Association state tournament for the eighth consecutive year.

The 50th AHSAA State Volleyball Championships will be played Tuesday-Thursday at the Birmingham CrossPlex and Bill Harris Arena.

Essix gives the credit to her teammates for her prowess on the court.

“I don’t think about it on a personal level,” Essix said. “Everything for me surrounds the team. Without my teammates doing what they do, I can’t do what I do. It all starts with them passing the ball and getting it to me. I love my team.”

Even so, Essix is a special talent. Colleges look for players who can touch 10 feet or higher, but Essix reached 10 feet, 8 inches when she was 12 years old. And for the record, she didn’t have any sudden growth spurt. 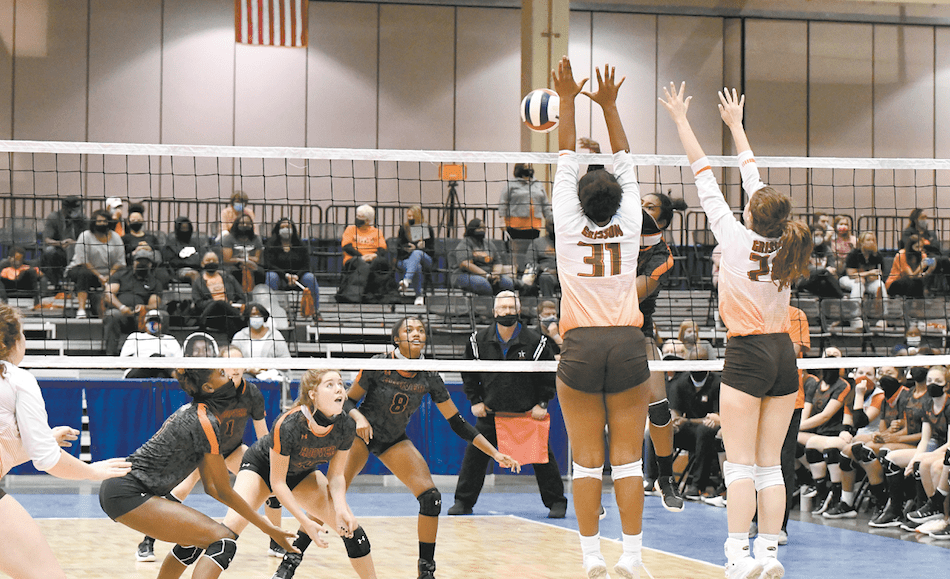 Later to the Game

Essix started attending volleyball camps in the third grade, but she didn’t join a team until she was in the seventh grade at Bumpus Middle School. After that, she started playing club volleyball with Alabama Performance, formerly Southern Performance.

She didn’t join Hoover’s varsity full-time until her sophomore season, although she got to experience part of the season her freshman year. She was still adjusting academically to high school, paving the way for her to become a student in the Hoover International Baccalaureate Program.

Camper didn’t mind because he knew that once she joined the varsity full-time, she would be a force.

“Gabrielle is a once-in-a-lifetime athlete,” Camper said. “This is her fourth year in our program, and she’s grown as a player and a person. We are proud of her leadership and we think she has a great future in the sport.”

Essix committed to Florida as a sophomore.

“Florida gave me the best balance of academics and athletes,” she said. “Plus, they usually go to NCAA tournament, and they’re one of the top five academic schools in the South.”

This has been a special volleyball season for Essix and Hoover. After losing their first match to McGill-Toolen, the Bucs haven’t lost since, reeling off 49 consecutive victories while rarely dropping a set.

“It’s been great, really fun,” Essix said. “We’ve been getting better every day. We’re so strong in the basics – passing, hitting, defense.”

With a deep, talented roster, the Bucs entered the season as the favorites to win the Class 7A title, but the lofty expectations didn’t put any added pressure on them.

“For us, we don’t think about the expectations,” Essix said. “We try to play for each other and represent the name on our chest to the best of our ability. The team is experienced and so much together. We have a very large senior class and most of us have been on the same club team since the seventh or eighth grade.”

That includes junior Rya McKinnon, who led the Bucs with 44 kills in the regional.

“Rya feels like a senior,” Essix said with a laugh. “She can hold her own.”

OTM High Schools Will Be Battling It Out

The semifinals are set for 6 p.m. Wednesday and the final is scheduled for 4 p.m. Thursday at the Harris Arena.

Hoover has never won a state volleyball championship, losing in the Class 7A semifinals in 2019 to eventual champion Mountain Brook. Essix said that gives the Bucs even more motivation this week.

“We’re excited about having the chance to go for a state championship,” Essix said. “We’ve got to take it match by match, point by point and set by set, talking to each other on the court, sticking together and keeping our emotions in check.”