You are here: Home / Latest Posts / ‘Special Talent’: Spartans’ Sargent Is One of the  Top Junior Golfers in the Nation

Seth Sargent exposed his sons, Gordon and Thomas, to as many sporting activities as possible when they were younger.

He didn’t want them to become golfers just because he was a golfer, one of the top amateurs in Alabama.

But when Gordon was 9 years old, Sargent entered him in the Future Masters tournament in Dothan. Gordon was hooked. And now the Mountain Brook High School junior is one of the top junior golfers in the nation.

“Gordon has been on the radar screen for a while,” Mountain Brook golf coach Alex Lockett said. “His dad’s a really good player, so he has good golf genetics. He’s a special talent, a great kid, real respectful.”

Gordon Sargent is a two-time Rolex Junior All-American. He has won two American Junior Golf Association events and is ranked 16th nationally in Golfweek’s latest junior rankings. He’s also currently fourth in the U.S. Junior Ryder Cup standings, which is scheduled to be played in the fall.

As a freshman at Mountain Brook, Sargent and teammate William Wann tied for the low medalist honors with 36-hole totals of 11-under 133 at the Alabama High School Athletic Association State Golf Championships. Both tied the state tournament record for 36 holes while leading the Spartans to the 2018 Class 7A state title.

In the 2019 AHSAA state tournament, Sargent tied teammate Reynolds Lambert for second at 1-under 143 as Mountain Brook claimed its third consecutive Class 7A title.

But Sargent and the Spartans won’t get a chance to extend their state championship streak because of the COVID-19 pandemic. The state tournament was scheduled to be held May 11-12 in Mobile but was canceled when schools closed for the remainder of the school year on April 6.

“Our season was just getting started,” Sargent said. “Our next tournament would have been a couple days after they closed the schools.

“One of my favorite things to do is be with my teammates and hanging out with them. It’s tough to have to sit back and do nothing. I was looking forward to trying for another state championship.”

Sargent, a soft-spoken youngster, enjoys being part of a team and being around his fellow competitors.

“I think what I love about golf is a lot of the people you meet,” he said. “And playing every day, there’s something new. You can’t expect the same thing every day when you’re out there.”

Instead of attempting to win another state title, Sargent is doing online school at home along with his brother, Thomas, a freshman who also plays golf, and going to Shoal Creek on occasion to work with his golf coach, Eric Williamson.

Sargent credits Williamson for helping him develop his game.

“He’s been a great friend, a family friend,” Sargent said. “I’ve been working with him since I was 10. He’s been great for my golf game. He does everything for me to help make me better.” 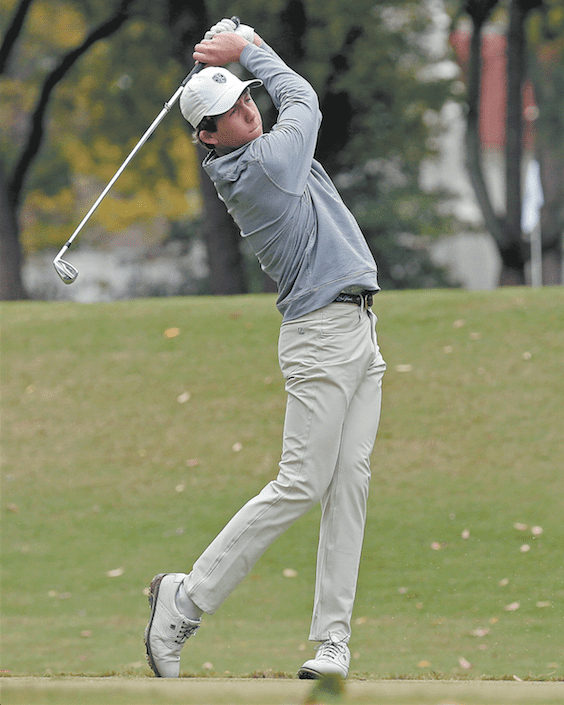 Sargent is a steady player who rarely gets rattled on the course. And he’s self-assured, expecting to win whenever he tees it up.

“He doesn’t let anything bother him,” Lockett said. “He’s not arrogant, just the best.

“I’ve had kids who don’t know how to handle that as well. Every time you show up, you’re supposed to win, and that pressure gets to them. That’s not the case with Gordon. He just shows up and goes out and plays. He’s fun to watch.”

Seth Sargent has a similar assessment of his son.

“I think he has a lot of self-confidence and he works hard,” Seth Sargent said. “He’s fairly non-emotional. He’s even-keeled.

“He’s got an all-around game. Putting is one of his strengths, and his short game.”

Gordon Sargent agrees with his dad.

“I struggle off the tee with my irons, but my short game is always there,” Gordon Sargent said. “Putting is probably the best part of my game. I’m working on my long game.”

Sargent will be competing again this summer. He’s already scheduled to play in an Alabama Golf Association tournament in early June.

In addition to his time on the course, Sargent co-hosted the AJGA Alabama Cup, which raised more than $100,000 for charity in the past two years. He also received the Paul Simon Character award from the Junior Invitational at Sage Valley in Graniteville, South Carolina.

Even though Sargent, who has a 4.1 grade-point average, doesn’t graduate until 2021, he already has committed to Vanderbilt, something he did after his freshman year.

“The biggest thing in my decision was the coaches, the city of Nashville and I already know all the people who I’ll be there with,” Sargent said.