Dr. Jennifer De Los Santos has no trouble identifying what she likes most and least about her job as the new Grandview Cancer Center’s medical director.

Before joining the Grandview team, De Los Santos, 48, was an associate scientist and professor in the University of Alabama’s Department of Radiation Oncology. She also was co-director of the breast cancer research program and medical director of the Kirklin Clinic at Acton Road.

The Grandview Cancer Center, which officially opened in May, is a 26,000-square-foot freestanding building near the main hospital on U.S. 280. It’s a place for oncology treatment and for research, too.

De Los Santos said that while the building and technical equipment were in place when she was hired as director, she’s been able to have a great deal of say about the center’s operation and its direction for the future.

“It’s been a good challenge,” she said.

“I see every patient who comes through the doors who needs radiation treatment,” she said. “I was brought on board to head the radiation program and to start up some interdisciplinary clinics. This approach will allow all physician disciplines involved in the patient’s care to create treatment plans upfront that offer cutting-edge care with state-of-the-art equipment and therapeutics that are a part of precision medicine.”

De Los Santos is from New York but said she has lived “all over the country.” She was a senior in high school when she decided to follow a pre-medical curriculum in college.

“There was a comfort level with a career in medicine since my parents are both in the medical field,” she said. “My father is a surgeon, and my mother has a Ph.D. and is a clinical psychologist.”

She smiled as she remembered one aspect of having a surgeon-dad that almost made her shy away from the medical field.

“When I was little, my dad would come home and leave his clothes with blood on them on the floor, and I swore I would never go into medicine,” she said. “I think I wanted to be a ballerina until I was a teenager.”

After graduating from Emory University in Atlanta, De Los Santos went to medical school at the University of Florida. Several experiences there led her to the fields in which she would eventually specialize.

“My first year of medical school, I had exposure to radiation oncology,” she said. “I was placed with Nancy Mendenhall and did another rotation with her during my fourth year.” 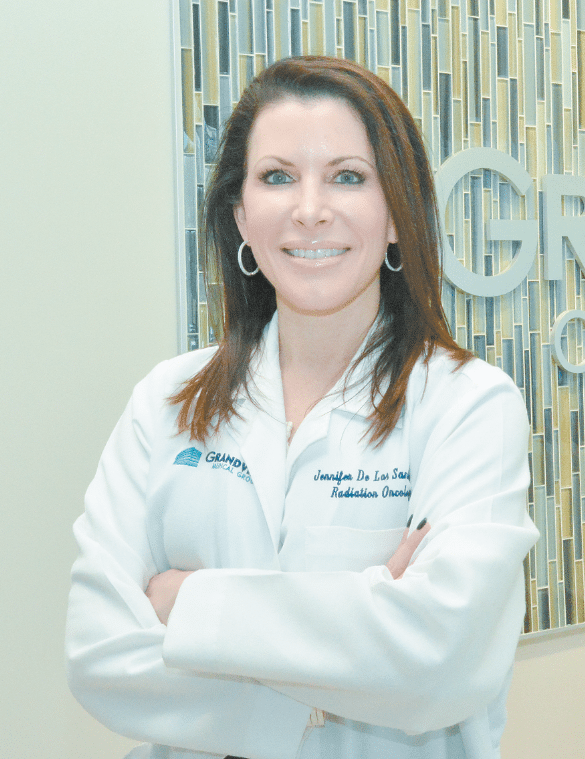 Mendenhall was chairman of the UF College of Medicine’s Department of Radiation Oncology from 1993 to 2006 and is a leading researcher.

“In my third year of medical school, I did a rotation on the oncology service,” De Los Santos said. “I was able to work up a patient with leukemia. We got him into remission, and I found the experience very impactful.”

De Los Santos has been in Birmingham for 17 years. She was recruited to the city from Houston’s MD Anderson Cancer Center, one of the three original comprehensive cancer centers in the U.S.

She has been nationally recognized for her work in radiation oncology, specifically her research in breast cancer treatment.

“I really enjoy taking care of women,” she said. “I have a connection to my female patients.”

She takes seriously the emotional effects of a cancer diagnosis.

“I spend a lot of time with all my patients, and we try to give them a great deal of education – what they should expect and how they can impact their own care through things like healthy lifestyles and good sleep habits,” she said. “We empower patients with knowledge and through a supportive structure.”

Even with the demands of her new position, she is continuing her national studies.

“Sometimes cancer wins,” she said. “That’s one of the reasons I’ve stayed in research.”

She used an analogy to describe her approach to medical care that will be easy for most people in Alabama to understand.

“Cancer is a team sport,” she said. “I’m the coach, and the patient is the quarterback. We have a game plan, and we go for a touchdown.”

De Los Santos is a board examiner for the American Board of Radiology. She’s also been named to the Best Doctors in America list multiple times.

She’s married to Dr. Conrad De Los Santos, an emergency room physician and chief of staff for Medical West Hospital. They have two children. Their son, Jordan, is 15, and their daughter, Katie, is 11.

She said the family loves skiing – Beaver Creek in Colorado is a favorite spot – and riding.

“We have American saddlebred horses,” she said. “I have a beautiful three-gaited saddlebred mare.”

She said Katie is an award-winning rider, while Jordan is “more into basketball now.”

“My husband just cheers,” she said.

De Los Santos said she tries to find a balance between her personal life and her demanding job.

“I’ve had a lot of practice compartmentalizing and have great support through my staff here and at home,” she said. “My family is my priority. My job takes a close second.”