One of the most eye-catching spaces at this year’s Decorators’ ShowHouse was almost overlooked.

Designers who want to participate in the Alabama Symphony Orchestra’s annual fundraiser are given a list of rooms and then present plans for the one they’d like to transform. Rick Griffith of Griffith Art Gallery said the first-floor hallway he wanted – and ended up with – wasn’t even on the list.

He chose art that transformed the former pass-through space into one that encourages lingering and looking.

“The art I picked is all energizing and is by up-and-coming artists,” he said. “I wanted the pieces to coordinate, to tell a story, but also to be able to stand alone.”

Griffith said the display is a mix of “totally non-objective abstracts, impressionism and abstract-impressionism.”

“That means that some of the paintings have no intentional subjects,” he said. “Many people who say they don’t like abstracts probably haven’t seen good ones. It’s like jazz music; it must have composition, color, a ‘hook’ – something that grabs you.”

The Pelham art gallery is co-owned by Griffith and his twin brother, Dave. Along with their parents, Jenny and Richard Griffith, the brothers opened the gallery in 1987. It wasn’t the family’s first venture into art.

“We’d had galleries in the Dallas/Fort Worth area,” said Rick Griffith, adding that the family moved from Birmingham to Texas in 1968. “Our mother is an artist. When we were 7 or 8, she was diagnosed with lupus and told she had six months to live.”

Jenny Griffith’s health problems meant she had to leave her job at Texas Instruments.

“She’d always done art as a hobby,” Griffith said. “She couldn’t work, so she took art lessons. We’d go with her to art shows and help her; she couldn’t be out in the sun. I didn’t realize at the time how strong she was.”

Thankfully, the doctors’ predictions were wrong. When Rick and Dave Griffith decided to attend college at the University of Montevallo, their parents came back to Alabama, too.

“They’re retired now, but they’re really supportive and our greatest advocates,” Griffith said. “My mom still paints off and on.” 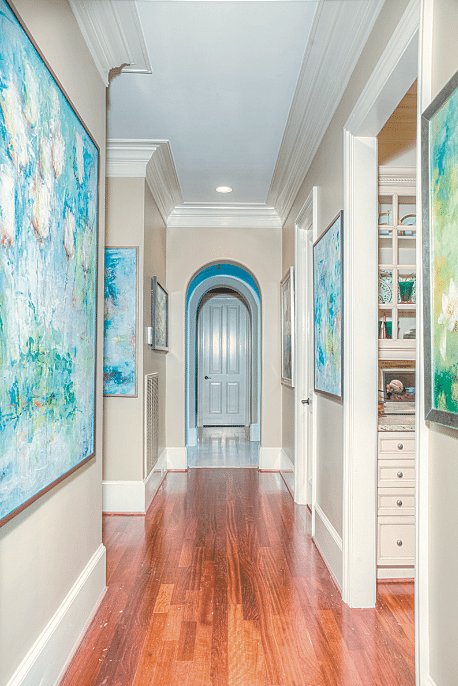 He said one reason his mother’s work stood out at shows was because she took the time to properly frame it.

“The trend now is to hang art without a frame,” Griffith said. “That’s sometimes for economic reasons. But even a simple frame can make a difference, like a man wearing a belt or a woman adding the right necklace and earrings.

“We do ‘gallery framing’ of art purchased here at no charge instead of ‘gallery wrap,’ which is without a frame. We want it to be right.”

For the paintings in one of his ShowHouse spaces, Griffith chose minimal framing.

“Notice how the frames are coordinated so that pieces I want you to compare to each other are framed the same,” he said.

He named his space “Happy’s Hallway.”

“Dave and I both have really eclectic taste and like pretty art, uplifting art,” Griffith said. “We think art should evoke positive emotions. It can even connect you with somewhere you’ve been or want to go. It should engage you.”

He said customers visit the gallery from all over the United States. Often, that’s because people who have moved from Birmingham to other places have taken along art they bought from the Griffiths.

“Their new friends see it and will travel here,” Griffith said.

The gallery offers both quality and quantity.

“We have more than 2,000 paintings in the gallery all the time,” Griffith said. “It’s all original art – no prints or paper. There’s not much left in the world that’s truly one-of-a-kind. We travel to meet artists and buy out- right from most of them. We take the risk so the artists don’t have to.”

He said many people visit the gallery in search of a piece for particular spots in their homes.

“Our advice is to find a piece that speaks to you, that grabs you,” he said. “When that happens, you can see it in their faces.”

Griffith Art Gallery has been a ShowHouse participant for several years. Griffith said he was grateful to Perry Umphrey and Molly Bee Bloetscher, the event’s co-chairmen, for letting him be a part of the event.

“It’s been a wonderful experience,” he said. “I like supporting the arts, and we have a great symphony here. I also like meeting all the others who participate as well as the volunteers.”

Each piece of art in Happy’s Hallway is for sale.

“Since people can buy the art at the ShowHouse, I wanted to support the symphony by offering original art at very reasonable prices,” Griffith said.

ShowHouse visitors should look for a book in Happy’s Hallway that tells about the art displayed there. They also shouldn’t miss the second Griffith-designed space.

“We did the public bathroom, too,” Griffith said. “It’s more traditional, with art in the Old Masters style.”

He also selected, arranged and hung all of the art that’s in the garage area, which has been transformed into an elegant dining area where patrons and visitors will be able to enjoy a meal while they’re at the ShowHouse.

Like his mother, Griffith paints, and there’s one of his creations in the bathroom.

“I started out with a perfectly good mirror and used chemicals to remove most of the silver backing,” he said. “Then I painted on it. It’s called ‘Risen,’ and there’s an almost hidden image of the risen Christ. The neat thing is that while you are searching for and looking at the image of Christ in the mirror, you can’t at the same time look at your own reflection.”

Griffith Art Gallery is at 109 Hilltop Business Drive in Pelham. For more information, call the gallery at 985-7969 or visit griffithartgallery. com. ❖