Looking for a sweet treat? You can’t go wrong holding out for a Hero – as in Hero Doughnuts.

After launching his brioche doughnuts at pop-ups and at the Market at Pepper Place, chef Wil Drake now has a storefront in Homewood. Hero Doughnuts is at 3027 Central Ave., right behind Nabeel’s Café and Market. The store opened last year on Halloween.

You’ll know you’re in the right place if you see folks with their noses pressed against the store window – they’re watching the doughnuts being made – and if your own nose detects a tantalizing aroma every time the front door opens.

Hero Doughnuts are made with an emphasis on seasonal, local products – and with brioche dough. Brioche is a French enriched yeast bread made with plenty of butter and eggs.

Yeast doughnuts are lighter and moister than cake doughnuts, which are, well, more like cake. Both varieties have their proponents.

“We’re testing cake doughnuts and will do them eventually,” Drake said.

He and his original business partner, Jason Wallis, started Hero Doughnuts in 2016. Since then, they’ve been joined by two other partners: Nick Pihakis, founder of Jim ’N Nick’s Bar-B-Q, and Paul Yeck.

Drake grew up in Georgia and came to Birmingham to attend Samford University. He majored in dietetics and nutrition but also was into music.

“I play the drums and for a while … toured, traveled and recorded,” he said. “But it was a tough life. I needed a change. I didn’t want to go back to school, and the only thing I loved as much as music was food.”

He worked at several restaurant jobs and then was ready to open his own business.

“I didn’t want a full-on restaurant; I wanted something more focused,” he said. “I’ve always loved doughnuts. Living in Georgia, we had a Krispy Kreme. My dad and I would go there and get either six or 12 doughnuts. We couldn’t always eat 12, but we’d give it our best shot.”

In Search of Doughnuts

While Drake was on the road as a musician, he did some fun research.

“I’d seek out doughnut shops while I was traveling,” he said. “I was on a kick to find doughnuts all across the country.”

He said another reason for choosing to open a doughnut business was the pastry’s wide appeal.

“Doughnuts have been a trend, but they’re also something that’s always going to be around,” Drake said. “All ages like them. We try to do different flavor options, from simple pink sprinkles to pistachio, maple sea salt and lemon cardamom.”

Hero Doughnuts’ very first gig was a pop-up at Seasick Records in Birmingham’s Crestwood neighborhood. Drake and Wallis spread the word through social media and through NextDoor, a private social network for neighborhoods. Food writer Bob Carlton of AL.com helped with an article.

“I was heavily unprepared for our first and second pop-up,” Drake said. “I even made Jason get in there and help me.”

Drake said the partners’ goal from the beginning was a brick-and-mortar store.

“But I’m glad we did pop-ups,” he said. “I’d encourage anybody to do pop-ups first to test the market.”

The storefront became a reality when Drake discovered that Homewood Musical Instrument Co. had left its Central Avenue building and moved a few blocks away. The place needed some work to transform it into a bakery, including the installation of a kitchen.

Drake said he communicated the “general feel” he wanted for the place to interior designer Micah Yeck, Paul’s wife, who put his ideas into effect. There’s an exposed ceiling in the eating area and concrete floors. Red grout perks up square white subway tiles.

“Our main goal was that we wanted to be visible at all times,” Drake said.

Thus, people inside the store – or peering in through the front window – can see dough being mixed in huge mixers, kneaded by hand and going through a commercial dough roller.

“We have a garage door that we can open in good weather,” Drake said. “Homewood Central Park is right across the street.”

On a recent fair-weather Saturday, Drake said, “People came in and bought food and took it to the park to eat it.”

The pastry case at Hero Doughnuts has a tempting display of staple flavors such as vanilla glazed, chocolate glazed and Boston cream plus some seasonal offerings.

“Our goal is to always have a jam-filled doughnut that uses the fruits that are in season,” Drake said.

One unusual treat is the “Fro-Nut.”

“A friend of mine up North who does pop-ups said, ‘Do frozen custard when you open,’” Drake said. “We have homemade frozen vanilla bean custard. We take a doughnut that can be filled and make it to order. You can also get a cup of custard or a nitro coffee float. We have regular coffee, beer and wine, too.”

The menu includes breakfast sandwiches made with bacon and sausage from the FatBack Pig Project in Eva, a little town near Cullman.

“Our fresh breakfast sausage is sage-y and savory,” Drake said. “We make our own pepper jam and what we call ‘crack sauce,’ which is our house sauce. We make our own pickles, too.”

“I love our burgers,” Drake said. “They have brioche buns, and you can get a fried egg on them.”

Brioche dough is used not only for buns, but also for fritters and doughnut holes called sidekicks.

“You can find our doughnuts there, but not every day,” Drake said. 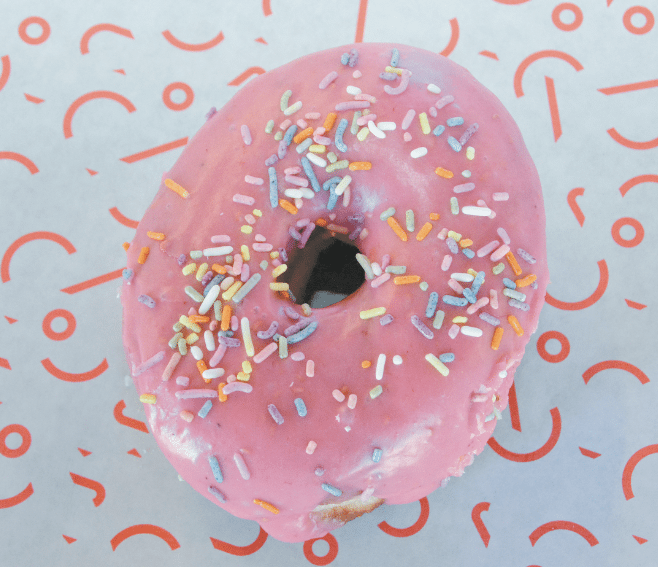 Hero Doughnuts also are at Big Bad Breakfast on U.S. 280. They’ll be back at The Market at Pepper Place in April.

Several special treats are available this time of year, including a traditional Mardi Gras cake.

You’ll also see King Rings – doughnuts decorated in Mardi Gras colors – in the display case, and there will be special Valentine’s Day flavors this month.

Drake and his wife, Allison, are the parents of a daughter, 4-year-old Hadi, and son, Corgan Taylor, who’s 12. The family lives in Crestwood.

Drake said he has to rise and shine at about 3 a.m. every day so that his doughnuts can be made fresh. Popular flavors can disappear quickly from the display case. In fact, the store is open daily from 7 a.m. “until sold out,” according to the Hero Doughnuts website.

“The worst thing is to see little girls come in and want a pink sprinkles doughnut, and we’re out,” he said. “I guess that gets to me because I have a little girl, too.”

Have some exciting OTM NEWS? Submit YOUR NEWS
Friday, June 24, 2022