For the 15th consecutive year, Homewood High School boasts the largest marching band in the state of Alabama.

According to the band’s assistant director, Chris Cooper, 375 students make up the roster for this year’s marching band. That number accounts for about one-third of the student body.

Though it isn’t the most Homewood has had marching – last year’s band topped 400 – the drumline has reached a record 68 drummers. 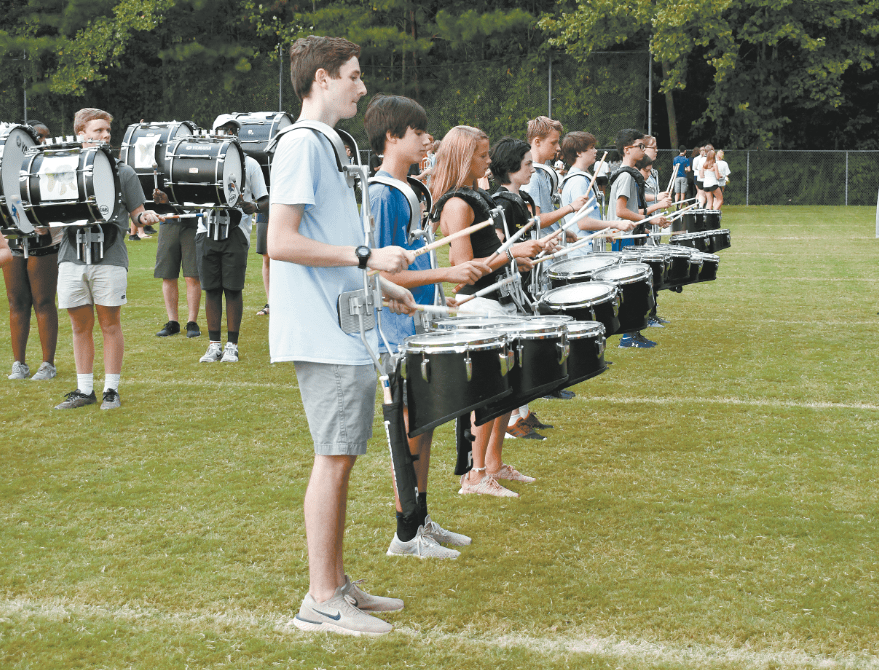 “We have a really cool drum solo this year that involves two large drum racks with extra drums and cymbals mounted on it,” he said. “I wanted to add something a little different to our show this year for the drumline. They are really loving playing on the rack and the audience is going to really enjoy it.”

Students cannot just sign up to be a member of the drumline. Learning to play percussion properly takes practice.

“Our drummers start in the sixth grade in band,” Cooper said. The students who stick with it then continue to learn the instrument through middle school, with many taking private lessons on the side.

Members of the marching band devote a portion of their summer vacations to preparing for football season, spending three weeks in band camp before school starts.

“Each unit of the band works on their show and then we bring them all together the last week to put the show together with the brass, woodwinds, color guard, drummers and the Star Spangled Girls,” he said.

“The drum line practices an extra week in July, getting ready for marching season,” Cooper added.

In addition, the drum students practice consistently throughout the year to maintain and improve their skills. Cooper said they video their practices and send them to their drum instructor for evaluations.

Regardless of the hard work, band students benefit from the musical and life skills they develop.

“There are so many studies out today about what music does to the brain and how it stimulates learning,” he said. “We are so fortunate in Homewood to have a wonderful school system who supports music at so many levels.”

According to Arts Education Partnership, music education helps students develop motor and cognitive skills, as well as boosting their proficiency in other subjects as they get older. Students also showcase a higher level of thinking through increased attentiveness, perseverance, creativity and self-esteem.

In marching band, Cooper noted, students have to get a good grasp on time management and teamwork.

“Leadership is a big part of being in the band. With 375, we have five drum majors who are the top student leaders and conduct the band,” Cooper said. “We also have leaders in each section who help the younger kids with their instruments and how to march on the field.”

When successful, the group feels like one big family on and off the field.

Though they have to put in a lot of hard work, band students experience certain perks, including travel. The band has performed in the Macy’s Thanksgiving Day Parade nine times, including last year.

“We want kids to enjoy band and have a great memorable experience in high school,” said Cooper.

“Traveling to the big parades in New York and California gives them that opportunity to be with their friends and do something they will remember for the rest of their life,” Cooper said. “The students who marched in the Macy’s Parade last year will never forget how cold that parade was and will always have that great memory on Thanksgiving to share with their families and kids one day.”

Have some exciting OTM NEWS? Submit YOUR NEWS
Saturday, July 2, 2022