You are here: Home / Latest Posts / State of the City: McClusky Found Mayor’s Job Overwhelming at First but Said Homewood Will Survive the Pandemic 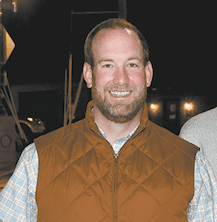 Homewood Mayor Patrick McClusky delivered his first State of the City address to the Homewood Chamber of Commerce Jan. 19, less than three months after being sworn into office amid a nationwide health crisis.

His speech painted an optimistic picture of Homewood’s future, highlighting the city’s ability “to make the best of this unfortunate situation.”

“Our businesses are rebuilding, our schools are back in session, and our citizens are starting to see a light at the end of a dark tunnel,” McClusky said. “The way we are living is different now, but that hasn’t stopped us.”

McClusky said he’s spent his first few months acclimating to the job, which had managed to hold some surprises for him despite his 11 years in city government.

“People continue to ask me, ‘So how are things going?’ And my standard answer has been, ‘Well, I feel like I’m drinking from a firehose, although I feel like I’m taking in fewer liters per second than I was back in November,’” he said. “There are a lot of things that even I wasn’t aware of as a council member over the past 12 years, but I am getting more acclimated to the daily position.

“It is stressful knowing that you campaigned so hard and long on certain aspects and visions of where you wanted to see the city in four years, but you can’t even begin to work on those things until you have a greater understanding of the duties and responsibilities of this position.”

Homewood’s finances are stable despite the pandemic, he said. The city ended FY 2020 with a slight surplus, even after paying $370,000 in year-end employee bonuses, thanks in part to $1.1 million in relief funding from the federal government.

Sales taxes from October to December also were up 7% from what they had been a year ago, before the pandemic, McClusky noted.

“The men and women of the Homewood Police Department work very hard to keep our businesses and citizens safe, and I am so proud to see these continued declines.”

“I don’t know if you realize what a huge number that is, but that is a significant drop,” he said.

The city made progress even during the pandemic, McClusky said, highlighting the numerous capital projects the city undertook in 2020, including the repair of a stormwater sewer at Brookwood Hospital and the upgrade of streetlights to LED. He also pointed to the ongoing Green Springs Highway revitalization project, which soon will begin its landscaping phase. The city also continues to research the development of a city manager position, he said.

“I jokingly told people last year, back when the pandemic first hit our community in March, that I wouldn’t wish those (school) board positions on anybody,” he said. “These men and women were put in a situation where they had to make last-second decisions in circumstances they had never seen before. I applaud their efforts, and while it was a no-win situation, I believe that they did their very best in such challenging situations.”

Over the first semester of this school year, McClusky said, HCS “has averaged less than 1% of new COVID cases districtwide each week and continues to show very little evidence of spread in our schools. Students continue to wear facial coverings and are distanced to the greatest extent possible.”

The retirement of HCS Superintendent Bill Cleveland on June 30 was “another obstacle” for the school system, McClusky said, but he praised the hiring of Dr. Justin Hefner to replace him, calling it an “excellent decision.”

“I am very impressed with his knowledge and understanding of the Homewood school system and I believe Homewood City Schools are in good hands with Dr. Hefner,” McClusky said.

Though McClusky acknowledged that, “it was and frankly still is a time of great stress for many of our citizens,” he said he had hope for a “more prosperous year” ahead.

“Franklin Roosevelt once said, ‘A smooth sea never made a skilled sailor,’ and I believe this quote still holds true today,” he said. “Hard situations like the one we are dealing with now make us stronger and more capable.”