When the owners of Homewood’s historic Pink House, Clayton and Rachel Mobley, presented a proposal to rehab and build on the property to the Homewood Board of Zoning Adjustments on June 3, many community supporters were surprised to see it rejected.

The board denied two requests the Mobleys needed to move to the next step: a height variance and a pool variance.

Since the meeting, the property owners have advanced to one of only a few next steps. The couple has, in essence, filed a lawsuit against the city of Homewood.

An official statement from the owners reads, “While the Board of Zoning Adjustment (BZA) may still, on its own initiative, make a motion at the next meeting to reconsider our variance requests, after consultation with the City of Homewood and our legal counsel, the most realistic next step available to us is to file an appeal to Circuit Court.” 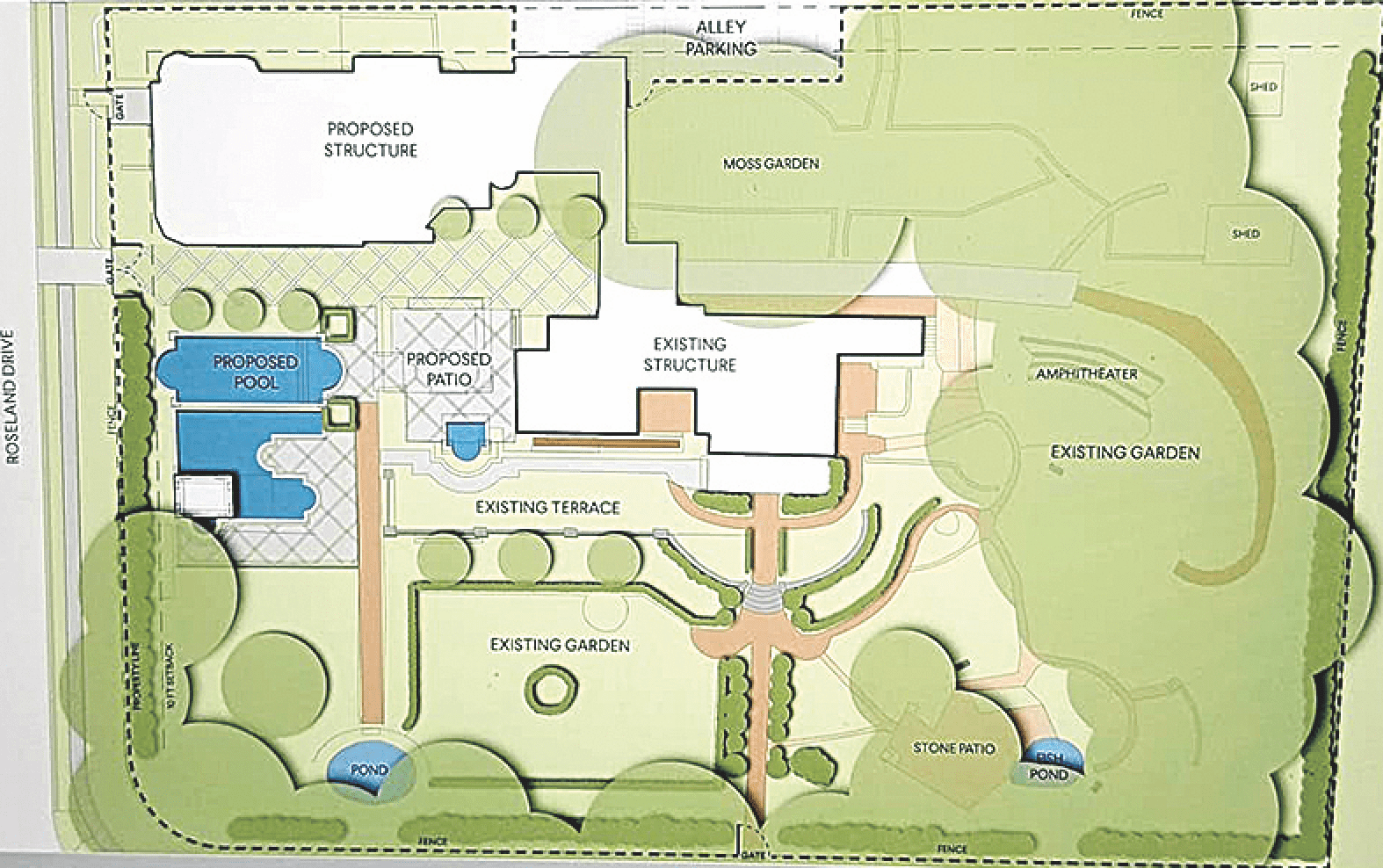 The plan includes the addition of a patio extending from the left of the original house and leading to a pool area.

Behind the pool would be an addition that would both expand the home’s footprint while providing modern comforts, including central heating and air.

“The building materials used back in 1921 were nonconventional to say the least, so many parts of the structure are extremely fragile,” Clayton Mobley said.

The additional living space would support the needs of a modern, single-family living space while maintaining the original structure’s existing floorplan.

He noted that, if the work were approved and began tomorrow, it would take about a year and half to restore the property and construct the addition.

“However, because the BZA did not approve our variance requests, we don’t know how long it will be before we will be able to get a building permit,” he said. “Unfortunately, the appeal process could take a very long time.”

The Pink House restoration is a story of trial and error.

It was built in 1921 by Georges and Eleanor Bridges, socialites and artists who hosted salons and frequently entertained nationally recognized artists.

Shortly after the death of Eleanor Bridges, the house was purchased by Eric and Diana Hansen in 1988, and they in turn sold it to developer Pat O’Sullivan in 2004.

It wasn’t until 2018 that Sullivan began working with the Homewood Planning Commission to subdivide the property into six lots.

Concerned members of the community spent more than a year raising funds and awareness in an attempt to save the property, and in the 11th hour, Holly Ellis and her family bought the lot from Sullivan with the idea of restoring it.

The Mobleys quietly purchased the property in 2020, while Rachel Mobley was pregnant with their first child, also in the hopes of seeing it restored.

When asked what made them feel confident enough to take on the project, Clayton Mobley noted that confident might not be the right word.

“Naive, maybe?” he said. “All jokes aside, we fell in love with the property and the future we envisioned for our family there. We knew that vision would be worth all the hard work ahead.”

Nevertheless, owning the piece of local history has been rewarding for the pair. Artifacts recounting the story of the home’s past have been passed down from owner to owner.

“We specially love reading Eleanor’s personal diary,” Mobley said. “She was hilarious. It’s been fun to share the property’s stories with the rest of Homewood because the community has shown such wonderful interest and support.”

While they continue to find enjoyment in the property despite the downfalls, the couple has hope their vision will come to fruition.

“We know the property is unique for so many reasons,” Mobley said. “Variances exist because there are unique situations that are worthy of making an exception.

“We really feel that persevering to circuit court where we can present our request to a higher legal authority will go well because our plans for the property really do just make sense.”

For Homewood residents who want to show support, the Mobleys ask that they contact city officials.

“The best thing we can encourage folks to do is contact their city leaders to let them know that Homewood citizens want their elected city officials to take action and find the swiftest path to resolution,” Mobley said.

The site offers detailed descriptions and images of the plans, as well as some fun facts about the home’s history.