You are here: Home / Latest Posts / Father and Son Geese: Ghignas Partner on a Book of Poems and Paintings Expressing Childlike Wonder

Charles and Chip Ghigna joke that they’ve known each other “very well” for 31 years, but 2020 marks the first time the father-and-son duo have collaborated on a book.

Charles, who also goes by the pseudonym “Father Goose,” has been a nationally recognized poet for decades, having been published in The New Yorker, The New York Times, The Wall Street Journal, Harper’s and Rolling Stone. He has taught at the Alabama School of Fine Arts and Samford University, and his 1989 poetry collection, Returning to Earth, was longlisted for the Pulitzer Prize.

Chip, meanwhile, is a visual artist whose paintings have appeared in galleries throughout the U.S. and France. He’s represented by the Homewood-based gallery Art Alley.

But despite their lifelong connection – lifelong for Chip, at least – the two only recently started to put their talents together.

“Chip’s art has been inspiring me since he could hold a crayon,” Charles said. “In recent years, I’ve been writing a few poems based on his art. I’m also always amazed to see him create paintings and drawings based on my poems.”

The two didn’t initially intend for that back-and-forth dynamic to result in a book, but they started to notice a thematic thread running through each of their collaborations.

“It simply evolved when we kept seeing the theme of dreams and illusions appear in each other’s work,” Charles said. “Before long, to our surprise, we had a collection!”

Last month, that collection was published as “Illusions: Poetry & Art for the Young at Heart”, a 48-page book they described as “a dreamland where visions become reality and reality becomes an illusion.”

The book features 22 poems intended for middle-graders, teens and young adults, though Charles stresses that “anyone who’s young at heart” can find resonance with the book. Each poem is accompanied by a stylized black-and-white painting or line drawing by Chip, who also contributed the collection’s striking cover art.

The collaboration was made easier, Charles said, by Chip’s art-steeped upbringing.

“It’s no wonder Chip’s been making art since he was a toddler,” he said. “Seriously, my family and I have always enjoyed the arts. Many of our friends are artists, writers and musicians. We collect art and have a house full of books. Chip grew up seeing lots of original art. The arts are a natural part of our lives and often the focus of our dinner conversations – art, poetry, music, movies. … He also sees us writing every day since he was born and hears us reading poetry.

“My wife, Debra, and I have written a couple of books together (“Barn Storm” and “Christmas Is Coming”). It was only a matter of time before Chip would join in with his art.” 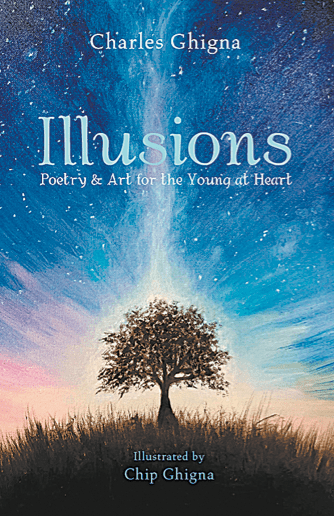 The book is both a paean to childhood creativity and a celebration of nature’s wonder, sometimes simultaneously; “Aries Sideshow,” for instance, conjures the image of a swan being pulled across a lake by its reflection “like a magnet / under the magician’s table.” The poem “Indigo,” meanwhile, is a loving portrait of creative-minded children “who sit by the window, / their thoughts / in the clouds high above … They paint and they play / the night into day. / They color the sky / orange blue.”

Illusions isn’t Charles’ first foray into youth-centric poetry. He published his first pair of children’s books – Good Dog/Bad Dog and Good Cat/Bad Cat – in 1992, and since then he’s written more than 60 books for children, with three more scheduled to be published by 2021.

His work for children has been published in magazines such as Highlights and Cricket, and a few of his poems have even been the focus of national SAT and ACT test questions.

Charles describes writing for children as “an honor and a privilege I never try to take for granted.

“There are many fine poets out there writing for children today,” Charles said. “The greatest reward for each of us is in knowing that our efforts might stir the minds and hearts of children with a vision and wonder of the world that may be new to them or reveal something already familiar in new and enlightening ways.

“I also love thinking and writing like a child,” he said. “I like entering the writing process each day with a childlike sense of wonder and discovery, not knowing what may appear on the page until I write it! I hope that feeling comes through to the young families and children who discover my books.”

Illusions ends with the poem “Final Lines,” a succinct summation of Charles and Chip’s creative relationship, drawing a connection between their two artistic disciplines. “Artist. Poet. / Creative minds. / We spend our lives / Making lines,” the poem reads. “Lines connect. / Father. Son. / Lines that bind / To make us one.”

Have some exciting OTM NEWS? Submit YOUR NEWS
Thursday, July 7, 2022