In 1984, he was dating a woman whose parents lived on that street. On his way to pick her up, he drove right past a house under construction.

The woman became his wife, Paula. And the house he saw taking shape at 4227 Old Leeds Road now belongs to them.

The Adamses’ Mountain Brook home is one of five that will be open Dec. 9 and 10 for the Independent Presbyterian Church’s annual Holiday House Tour. Birmingham lawyer Eason Balch and his wife, Betsy, were the house’s original owners.

Tom Adams is a partner in the Adams Gerndt Design Group, and Paula Adams is an accountant.

“We bought this house in the summer of 2016,” Adams said. “Paula and I were at a stage in our lives when the kids were gone. We had the typical Mountain Brook ‘kid’ home – lots of bedrooms, lots of baths, but not much living space. And we like to entertain a lot.”

While driving to visit his wife’s parents, who still live on Old Leeds Road, Adams noticed a “for sale” sign in the yard of the house he’d seen being built more than 30 years earlier.

“You could hardly see the house from the road because of all the boxwoods and trees,” he said.

“I think this was kind of one of those ‘meant to be’ things.”

Adams said he thought Betsy Balch had wanted a Georgian house because of the family’s connections to Virginia, where many houses were built in this architectural style. The house has 20-foot ceilings, light-filled rooms, and a terrace and pool in the backyard as well as other striking features.

“It was a great house with all the limestone and custom doors,” Adams said. “The original owner was a lawyer with lots of books, so there were bookcases everywhere. It just needed updates and a lot of love.”

Luckily, Adams has no shortage of expertise in design and construction. Adams Gerndt, now in its 11th year, does custom residential design. The company also furnishes many homes through its design division, Designing Home.

“Most of our jobs are in a three- to four-hour radius of Birmingham,” he said. “We’ve done homes at Lake Martin, hunting camps and duck camps.”

Adams graduated from Auburn University in 1985 with a bachelor’s degree in business. He became a partner in a commercial construction company in Birmingham but later decided to return to Auburn to earn two more bachelor’s degrees in architecture and interior architecture.

In 1994, he and his family returned to Birmingham, where he worked for an architectural firm. He and Adam Gerndt joined forces in 2006 to open Adams Gerndt Design Group.

The company’s work has been featured in publications that include Garden and Gun, Décor and Birmingham Home and Garden magazines. 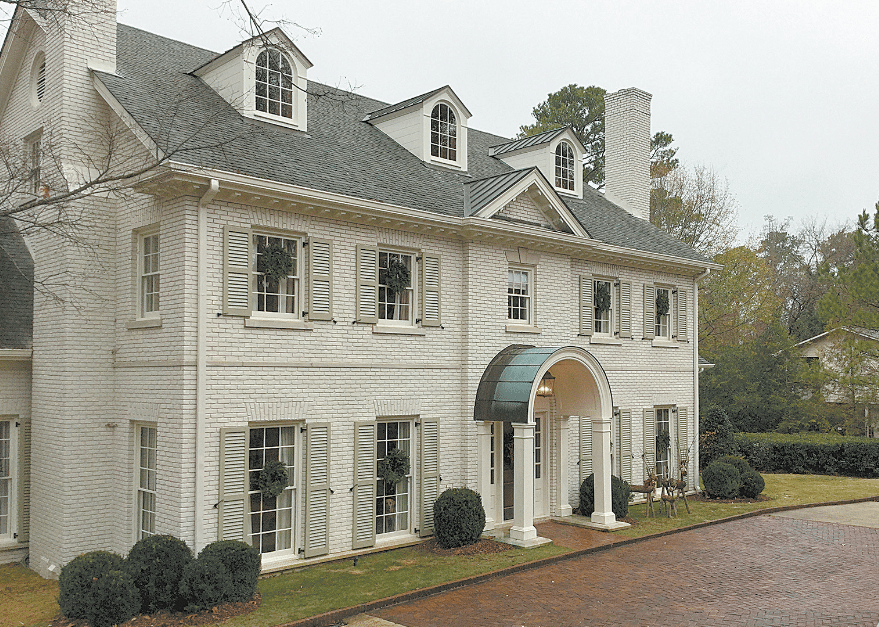 When the Adamses bought the Old Leeds Road house, they set about adapting and rejuvenating the house to fit their lifestyle.

“We gutted the kitchen and some bathrooms,” Adams said. “We re-landscaped and painted the exterior brick.”

The couple also made the house’s former living room their dining room – and vice versa.

Adams said almost everything inside the house is new.

Adams said he likes a mix of art styles, too.

“I’m a rabid art person,” he said. “I buy it wherever I see something I like. I like mixing Old World landscapes and abstracts.”

An impressive display in the living room has a variety of art, including a plan of a French flat given to him by his favorite professor at Auburn.

In the dining room, silver pieces, dinnerware in Royal Crown Derby’s Imari pattern and the couple’s collection of Spode’s Christmas china with a holly design will be on display for the tour.

Although the house’s architectural style is traditional, Adams wanted to give the interior a lively look.

“We love color,” he said. “Now, it seems that everything in the design world is monochromatic. We wanted pops of color.”

Since the couple enjoys entertaining, the kitchen got special attention. They installed a handsome Wolf stove with a custom metal hood. A deep island has plenty of storage space, and dark blue cabinets set off grey and white marble countertops.

The house has four bedrooms, including an expansive space for Tom and Paula.

“In the master suite, we both have our own bathrooms and walk-in closets plus a study,” Tom Adams said. “We can pretty much live in there.”

On one shelf in the study are two pairs of cowboy boots – one belonged to Adams’ dad and the other to his son. A Christmas tree in the room will be decorated with metal deer, pinecones and cowboy boots.

That tree is just one of several that will brighten the house for the holidays.

“My wife likes Christmas trees,” Adams said. “We always have a kids’ tree decorated with every ornament our children ever made. That one will be in the keeping room.

“I like things to look beautiful. My wife likes the emotional side of Christmas.”

Another special Christmas item will be displayed on the mantel of the dining room fireplace.

“The first Christmas we were married, my mother-in-law painted a beautiful crèche for us,” Adams said.

The Adamses aren’t members of Independent Presbyterian Church; they’re active at Canterbury United Methodist Church and in many Birmingham-area civic organizations. But Adams said they are pleased to help support IPC’s annual event, which benefits several of the church’s missions.

“Throughout the years, I’ve noticed that this tour is always a great success,” he said. “We’re happy to be a part of it.”