You are here: Home / Latest Posts / Love, Prayer and Quality: JaWanda’s Sweet Potato Pies Owner Credits Her Mother’s Example for  Starting Her on the Path to Good Food

Guests at Tuesday’s fifth annual Magic City Chocolate Challenge had the opportunity to taste unlimited chocolate creations from some of Birmingham’s best bakers and chocolatiers. In her first year participating in the event, JaWanda Jackson offered guests miniature sweet potato pies, which she calls “love in a cup.”

Jackson has been perfecting her sweet potato pie recipe for the past 20 years, ever since she met her husband, Eddie, and realized it was his favorite dessert.

“Because it was his favorite dessert, we would have it at family gatherings,” she said. “So family members started asking for them and wanting me to make them, and then friends would ask for them.”

She decided to put a price on her pies to see whether people would still want them, and they did. In 2015, she opened JaWanda’s Sweet Potato Pies on Valleydale Road.

“Ultimately, I turned a hobby into a business,” she said. “I enjoy cooking. I love the hospitality side of that, of serving. …  I love serving them my good cooking.”

In December, USA Today named JaWanda’s Sweet Potato Pies as the best pie shop in Alabama. The shop also has been named a top dessert shop to visit in the Birmingham area. 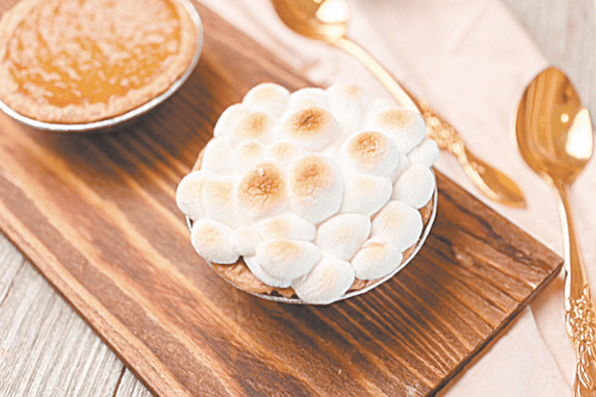 There are three things that Jackson said make her pies so delicious: love, prayer and quality.

“There’s a lot of love in it,” she said. “This is a passion of mine. It’s not something I do just to make money. It’s a passion.”

She said she and her team pray over their creations, asking that people will delight in and enjoy the products.

“We literally pray over them,” she said. “Just like you pray over your food.”

“We don’t (skimp) on our ingredients,” she said. “We use the finest of ingredients, and we believe in using them to create a taste that’s flavorful.”

From the age of 9 years old, Jackson was in the kitchen cooking with her mom.

Because her mother was an excellent cook, Jackson acquired a taste for good cooking.

“I have customers that tell me, ‘JaWanda, I thought I was eating good sweet potato pie until I tasted yours.’

“You have to acquire a taste for good cooking, and I acquired that taste from eating my mom’s food. She was an excellent cook, and then she taught me how to cook and put the right ingredients and seasonings on the food to make them good.”

Just as Jackson mother taught her, Jackson’s sons, Jeremiah and Je’Niah, have acquired that taste from their mother. They are 26 and 23, respectively.

Jackson calls Jeremiah her “big guy,” because he is the one who shares his mother’s passion for food and cooking.

“He loves to eat,” she said. “Jeremiah is the one that’s going to eat whatever mom puts on the table.”

Jeremiah takes his mother’s recipes and tries to make them taste like her food. So far, he has mastered her broccoli and chicken casserole, but he is still working on perfecting his sweet potato pie.

Je’Niah is a more finicky eater, just like his father. He doesn’t like to cook in the kitchen, but he brags about making the best Kool-Aid.

Jeremiah’s favorite of his mother’s pies is the S’Prize pie: sweet potato with orange cream cheese at the bottom, pecan praline on top and graham cracker crust. Je’Niah is more traditional and prefers the Original Sweet Potato Pie.

Also on the menu are pound cakes, cobbler, shortcakes, sweet potato casserole, sweet potato souffle and sweet potato parfait. Jackson also cooks Southern savory dishes, and her recipes can be found in her book, “What the Man Really Wants.”

For those who will be celebrating Mother’s Day with one of JaWanda’s sweet potato pies, she recommends calling ahead and ordering at 874-9880. Customers can also shop at the storefront at 5291 Valleydale Road but aren’t guaranteed that their favorite flavor will be in stock.

Have some exciting OTM NEWS? Submit YOUR NEWS
Wednesday, August 17, 2022