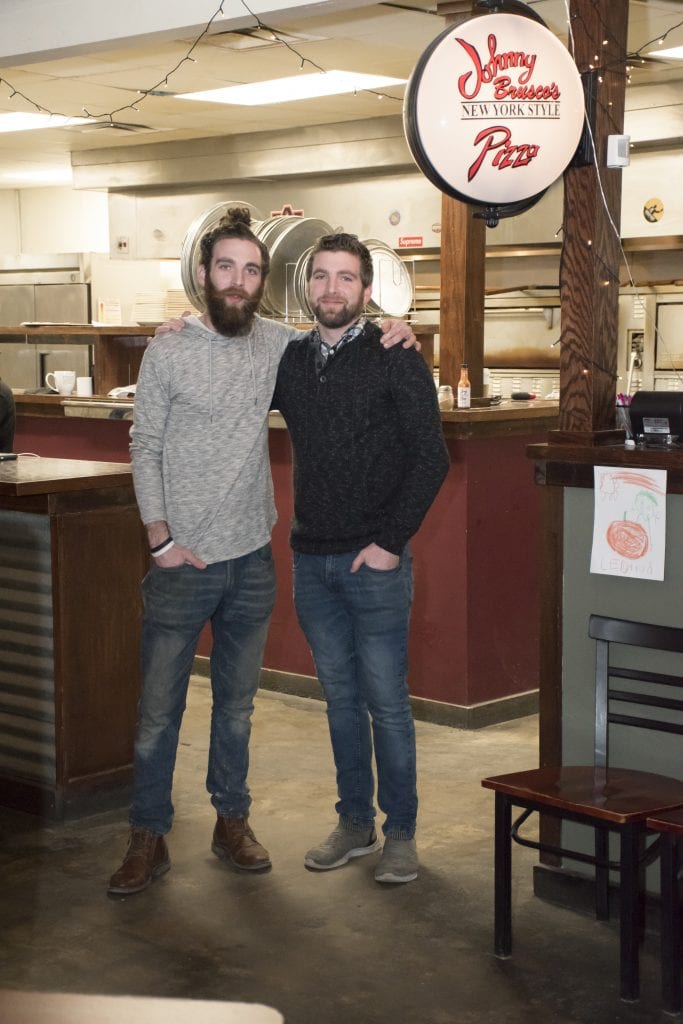 After five years of owning Johnny Brusco’s New York Style Pizza in Vestavia Hills, twin brothers Josh and Will Bruner have seen it all.

They’ve had two weddings in their restaurant. They’ve had people going through a divorce who talked it out over a pizza. They’ve seen families come together and fall apart.

“We have seen life happen, and it’s fascinating, it really is,” Josh said.

The restaurant, on Rocky Ridge Road, was a Movie Gallery when Josh and Will were growing up in the area. They lived down the street, less than a mile away.

“This used to be our Friday night,” Will said. “Come to the Movie Gallery, rent a movie. There was a Little Caesar’s down where Alfa (Insurance) is, so we would get pizza and a movie and go home. So we grew up loving pizza.”

In high school, they participated in theater productions. So the summer after high school graduation, the pair decided to chase their dreams and move to Los Angeles. But instead, they fell into the pizza business.

They had some auditions that turned into successes. Josh had a small role in Tim Burton’s “Alice in Wonderland.” But they both worked at restaurants to pay the bills. Will worked at a restaurant called Al Gelato, which specialized in desserts but also had Chicago-style pizza pies. Josh worked at another small restaurant, Tony Maroni’s, delivering pizza.

“We just kind of fell into it,” Will said. “Now, looking back, I know that’s where I truly fell in love with not just pizza, but having the community coming to a place where they felt like they were at home.”

After their 5½-year stint in Los Angeles, they returned home to Vestavia and started working together at Johnny Brusco’s in summer 2013. They became owners of the Rocky Ridge location two summers later.

Owning the “Cheers” of Vestavia

“We consider ourselves, and this is reiterated by our customers, that this is the ‘Cheers’ of Vestavia,” Will said. “They can come and take off their mask and really be themselves, and they don’t have to be a version of themselves that they think is expected of them in their everyday lives.”

From the first time a customer walks in, Will said, they become a part of the family.

“We’re also a place like your second home,” Josh said. “We want you to feel like you can literally lay back, relax, fall asleep. This is your home.”

As men of faith, they both agree that the restaurant has been a blessing for them to have and gives them a way to make intentional connections with the community.

“We’re men of faith, and we are proud,” Will said. “We boldly speak that not just into our business but our team, our everyday life. … We use this as a foundation to be able to not just make a living but also reach the community and beyond that community. We boldly speak who we are and where we come from and what we believe, but we don’t push.”

“We have been able to not only implement our faith, but also encourage and really lay the foundation of the atmosphere we want and believe the community not only needs but calls for,” Josh added.

Laughing, Will said they’re not just restaurateurs, they are babysitters, therapists and taxi drivers.

“Parents call all the time, ‘Have you seen my kid?’” Will said. “‘Yeah, he just ran through here. I think he might be in the game room.’ … As I’ve said to many people, we terrorized the neighborhood growing up, so now it’s our turn to give back. It’s our honor to serve.”

As restaurant owners, the Bruner twins hardly ever get a day off. They wear all of the hats: they’re in the kitchen taking pizza pies out of the oven, at the register ringing up customers or in the bathroom scrubbing toilets. Josh and Will say that working with a twin brother in a setting like this is a humbling experience.

“To be able to work day in and day out with family, we have gotten to the point in our lives where we realize family is where it’s at,” Josh said. “And that also helps keep us accountable and allows us to grow, not only as men of business, but as family members. And that enhances the atmosphere and enhances the effect it has on the community.”

As anyone who works with a family member can agree, Will said they have seasons where it can get tiring and frustrating.

“As with any family, sometimes you’ve seen them for more than you’d like to for a certain period of time,” he said. “We’ve found a healthy balance of how to work day in and day out with each other. We’ve had rough seasons, but we’ve learned, and we’ve grown closer to each other because of that. Our relationship has never been better.”

Moving to Los Angeles together during the Great Recession in ’08 also gave the brothers a sense of humility.

“To be able to get through it relatively unscathed, it gives me a greater sense of appreciation for life in general,” Will said. “And, again, being men of faith, doing what God’s calling me to do and not to take anything for granted.”

Even though the move to Los Angeles didn’t go exactly as planned, Will said he wouldn’t change it for the world because of where he is today. The stress of Los Angeles prepared the brothers for the stress of a busy Friday night at Johnny Brusco’s.

“Josh and I have learned to love it,” Will said. “The pressure and the stress was a little overbearing out in Los Angeles at times, especially for auditions. … You have to learn how to deal with rejection. At first it made us a bit standoffish and callous, even though we’re personable, but now we’re at the point where we’ve embraced that stress and come to understand that a lot of stress is self-inflicted.”

In December, the Rocky Ridge location will be celebrating its 10th year as a Johnny Brusco’s, and the twins say they aren’t going anywhere.

“As I say to a lot of customers, I’ll probably die here,” Will said, laughing.

The restaurant has an official Liverpool soccer supporters group, and the brothers have hosted and intend to continue hosting game events. They had a full house for the kickoff party this summer.

“There’s something to be said about celebrating and being together when you’re doing something you love,” Will said.

Both agree that they are thankful to learn every day and grow as business owners.

“To be able to get to do what we love to do, day in and day out, that’s something that we pray for and would wish for everyone,” Will said.