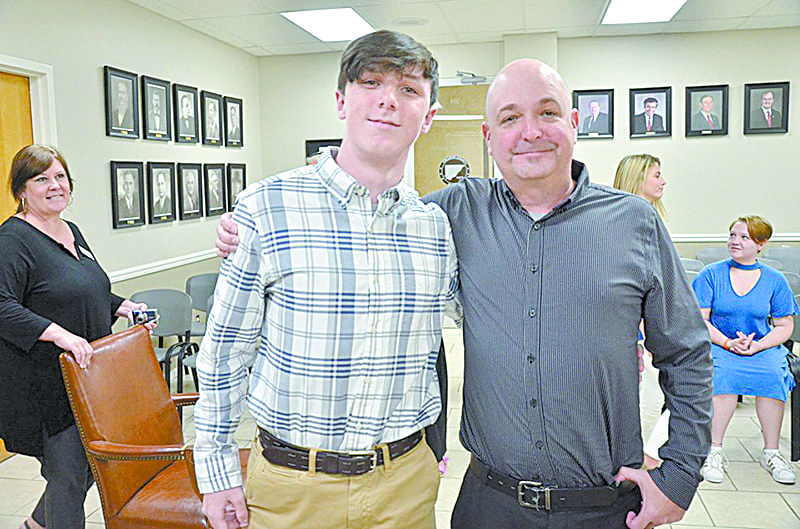 When Kyle Forstman looked back on his introduction to the adoption process, through his son Jeffrey, he penned a narrative that begins and ends with a pen. It describes his transition from bachelor life to fatherhood and how his quick decision to make that change became the greatest accomplishment of his life.

“The Judge laid out the official documents on his desk, with a pen,” Forstman wrote in a narrative for family and friends. “The room grew eerily quiet. ‘Kyle, will you sign for the permanent adoption?’ asked the Judge. I eyed the pen. Jeffery eyed the pen. Four thousand, nine hundred and fifty days he had waited for someone to pick up a pen for him.”

Jeffrey signed the papers in 2016, just months before he turned 18, having known Forstman for only a few months.

Last year, Forstman added a second son to the clan when he adopted Brady, who was 16 years old at the time.

One of the great joys of his fatherhood experience, Forstman said, has been watching his sons become brothers.

The pair mesh well together, he said. Jeffrey is older and a bit more of an introvert, and Brady is a social butterfly, just like Forstman, and helps bring his brother out of his shell a bit.

“When people meet them for the first time and continue to spend time with them, they’re really amazed when I tell them that (Brady and Jeffrey) have only known each other for a year,” Forstman said. “They think that they have been brothers for life because they get along so well.

“Today’s a day where they are nitpicking at each other,” he said. “But brothers do that. I did that with my brother.”

Throughout much of his adult life, Kyle said he was focused on himself, whether it be his achievements politically – serving on the Hoover City Council for one term and running for a seat in the state legislature – or collecting experiences through travel.

“I was very focused on work – my goals and my jobs,” he said, and all the while, the idea of  fatherhood was more of an afterthought.

“But there are only so many trips you can take yourself, and only so much paychecks you can spend on just you,” he said.

He made a successful in transition into the real estate world, but found that business relationships and friendships can be temporary when you’re constantly working toward your next goal.

Yet, in real estate, a part of his job was to work closely with families.

“You get to learn a lot about the families that you meet and their trials and tribulations,” he said. “How much they love each other, how much fun they have together, and you start yearning for that. You think, one day I hope I have that too.

It wasn’t until a close friend and adoptive parent recommended that he begin attending courses via the Alabama Department of Human Resources’ foster care and adoption programs that Forstman began forging a new path.

“Friends come and go, but there is permanency in adoption because you are a father creating these bonds that last a lifetime,” he said.

Through the adoption classes, Kyle was exposed to the Heart Gallery of Alabama, an initiative that pairs photographers with older children in the foster care system to create video biographies for potential adoptive parents to view. The idea of adopting an older child appealed to him, and as he continued his pursuit things began falling into place in a divine manner – he said it was simply God’s plan.

When Forstman saw Jeffrey’s video, he had an instant connection. He showed the video to his older sister Kristi, who was adopted in her early childhood, and she had immediate and strong reaction, brought to tear.

“It shows you how much is truly packed into those videos,” Forstman said. The video didn’t voice Jeffrey’s hardships within the foster care system, Kristi could just sense it.

Forstman said his close relationship with his late sister, who passed away a couple of years ago, was also a very strong guiding factor in his desire to adopt.

“I never thought of her as an adopted child. I just grew up with her as my sister and we were very close,” he said. That intimacy showed him that the intimacy that you have in a family of blood relation can be created in adoption.

Forstman said in sharing his adoption experience, he hopes to inspire others to pursue the process. If his story reaches one parent or helps get one child adopted into a loving family, then it’s worth it, he said.

When Forstman signed the papers and legally adopted Jeffrey, his son had spent 13½ years in the foster care system, waiting. There was a sense of urgency present throughout that adoption process, which many kids in the system share.

There is such a need for parents who are willing to build a family with an older child, Forstman said, and he feels that need is one that isn’t widely known or seen.

“There are so many kids of this age who need families,” he said. “If people had knowledge of this issue, then they would react. I just don’t feel like many people are aware of that.”

When it comes to his parenting philosophy, Forstman said he strives to help his sons become wise in their decision-making.

“I ask them what they believe the wise decision might be,” he said. The Bible plays a big part in their family life, but he said its guiding message to seek wisdom to live a good and moral life is one that is universal.

Like any father, Forstman is just doing what he can to provide a solid familial foundation for his sons, just as they have provided him.