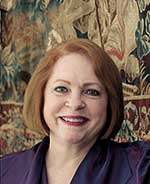 Latest accomplishment: Winning a Tony Award for being a part of the Four Ladies & a Gent producers group behind “A Gentleman’s Guide to Love and Murder.”

Louise Beard was already making a living in the arts when a trip to a local theater sent her down a path that would eventually lead her to the stage of Radio City Music Hall.

The Redmont resident, whose Four Ladies & a Gent group was the producer of the Tony Award-winning “A Gentleman’s Guide to Love and Murder,” was a pianist, choral teacher and dancer before she turned her passion for the arts into a career as a Broadway producer.

A graduate of the former Brooke Hill School, now Altamont School, Beard said she has been interested in the arts for as long as she can remember.

“Apparently, when I was really little bitty and was barely able to stand, I would dance around the living room when mama and daddy would play ‘The Nutcracker’ record,” Beard said.

Beard took piano lessons as a child, fell in love with performing and dreamed of traveling the world someday as a concert pianist. She took piano lessons throughout high school and started her freshman year at Westminster Choir College in Princeton, N.J., as a piano major.

“But my daddy wanted his baby girl back home, so I moved back and finished school at Birmingham-Southern (College),” she said.

After graduating from Birmingham-Southern, Beard worked as an assistant to organist and choirmaster Joseph Schreiber at Independent Presbyterian Church.

In 1976 she married John Beard, who is now the president of Alacare Home Health and Hospice. The couple’s first child, Graham, was born two years later.

That’s right around the time the professional musician first “got bit by the theater bug,” she said.

But it wouldn’t be a straight path from a life in music to a life in theater for Beard.

First, she had to dance.

“It all started when I saw a show Carl Stewart, who later started Terrific New Theatre, was doing at Birmingham Festival Theatre. Carl has always been my mentor,” Beard said. “Carl’s show was ‘The Decline and Fall of the Entire World as Seen Through the Eyes of Cole Porter,’ and after I saw it, I knew I just had to, absolutely had to learn how to tap dance.”

Beard started taking tap lessons from Dale Serrano and soon found herself in charge of choreographing a tap number for the Junior League of Birmingham’s Follies show.

“A friend of mine, Lee Whatley, is a trained dancer, and after the Follies, she suggested that we open an adult dance studio,” Beard said. “I thought I was just going to teach a few people a few moves for one show, but I ended up running a dance studio for the next 29 years. I still can’t believe I had the nerve to do that.”

After almost three decades of teaching dance at Time Step Studios, Beard said, her body stopped cooperating and she knew she had to find another creative outlet.

“It was around 2008 when my knees really started giving me trouble,” she said. “I had been expecting it because my daddy’s knees were really bad when he got older.”

The dance studio closed in 2009, and Beard turned her full attention to something that was quickly becoming her new passion.

“When my daughter, Lanford, was a teenager, I started taking her on trips to New York every Christmas and we would see as many shows as we could,” Beard said. “I couldn’t get enough of it, and pretty soon, I started making connections with people in the theater industry.”

From there, it didn’t take long for Beard to throw herself completely into the theater industry.

By 2011, a show she was involved with, “The Scottsboro Boys,” had been nominated for 12 Tony Awards.

“I had an infantile kind of start in this business and I’ve just had to learn a lot about the theater industry as I’ve gone along, but I don’t regret any of it,” she said. “I think I might have the hang of it now.”

Judging from all accounts, Beard does indeed have the hang of it.

Her theater credits include the Tony-nominated “A Christmas Story,” which opened on Broadway in 2012. She has also produced several local and regional shows.

“It’s not an easy business and it is an expensive business, but producing is something that you do for the thrill of it and you have to make peace with the fact that you may not get your money back,” she said. “A lot of it is about hard work, but a lot of it is about luck.”

And when it comes to the luck department, Beard has never been one to take chances.

“In the old days in Germany, if you had a pig, you were lucky because that meant you had something to eat,” Beard said. “So these little plastic pigs have sort of become my calling card over the years because I think they bring luck.”

At the Tony Awards ceremony in June, Beard drew national attention when she tried to spread some of that luck around to the Broadway royalty at the event.

“When I meet people, I give them a little plastic pig, so after we all went up to accept our awards, I gave one to Hugh Jackman (who was hosting the ceremony) and told him, ‘You have now been porked.’ It was great and a moment I’ll never forget.”

The success of “A Gentleman’s Guide to Love and Murder,” which won four Tony awards in all, has inspired Beard, who heads up her own SwineSTARS production company, to take the next step in her winding path through the arts.

“Up next, I’m working with Martin Platt, the former artistic director at the Alabama Shakespeare Festival, to produce ‘Dames at Sea,’ and locally, I’m one of the producers of ‘The Fantasticks,’ which just opened at the Terrific New Theatre,” she said.

Beard has also invested in the musical version of “Midnight in the Garden of Good and Evil” and a show called “Hand to God.”

“It’s exciting to think I could be back on stage at the Tony Awards next year,” Beard said. “But who knows what stage I’ll end up on next?”