She was sharing an apartment with two girlfriends in Birmingham in 2009 when a friendly neighbor stopped by to ask for a bottle opener.

“Todd lived in the same building, yet it took almost a year for us to meet,” she said. “In hindsight, this is shocking considering our building only had six units. One night, my friends and I were on the porch getting ready to go to a local bar and Todd happened to be on the balcony above. He heard us chatting and wanted an excuse to come by and say hello.”

Megan said she later found out that Ledet had plenty of bottle openers, but his ruse worked. They invited him along for the night and the two have been inseparable ever since.

Megan went on to complete her undergraduate degree at UAB in 2010 and her master’s in social work at the University of Alabama in 2012. She briefly accepted a position in Birmingham before moving to Miami for a job as a primary therapist with Oliver-Pyatt Centers.

Todd, a former New Orleans and Montgomery resident who graduated from Clemson in 2006 with an industrial engineering degree, stayed in Birmingham to continue working for Sunland Construction. After a promotion in 2014 to director of business development, he relocated to Houston, Texas, meaning their relationship now spanned over five states and more than 1,000 miles.

However, the long-distance relationship didn’t present a challenge the couple couldn’t overcome. A love of travel and many frequent flyer points enabled them to continue to spend time together, which included traveling to one of their favorite cities – New Orleans.

“We’d taken countless trips there over the course of our dating relationship,” Megan said. “The love for life, vibrancy, resilience and authenticity the city offers were all things we strived to mirror in our relationship as a couple.”

The couple found themselves in the Big Easy in November 2014 to celebrate the Crimson Tide taking on the LSU Tigers.

“Todd, an LSU fan, and I, an Alabama fan, have loved the football rivalry between our respective schools and actually consider the day of their match one of our favorites each year, much to the dismay of both fan bases,” Megan said.

Game day found the couple strolling through the French Quarter and ring shopping. Both say they knew that an engagement would come soon, but they were surprised when they found a ring they both loved, and they decided to purchase it on the spot.

“I’m an anxious and somewhat impatient person by nature, so as we were walking out of the store I blurted out, ‘Where are we going to do this?’, a statement that’s the frequent butt of jokes today,” she said. “He took me to Jackson Square in front of Saint Louis Cathedral, where he led me to the exact bench his stepfather had proposed to his mother on. It was there that Todd got down on one knee and asked me to spend the rest of my life with him.

“We spent the rest of the day celebrating with friends and enjoying the special time in our lives. We made a conscious effort to forgo posting our happy news on social media until a few days after in order to fully embrace (the) moment together. And, Alabama won the game that night.”

The two returned to New Orleans to tie the knot on Aug. 15. Megan and her bridesmaids stayed at the Omni Royal Hotel, where they were able to enjoy one another’s company as well as a balcony that overlooked the church where the ceremony would take place later that evening. The groom and his party got ready in a similar room before the two converged for photos and a first look in the Quarter.

The bridal party and relatives then traveled to the Saint Louis Cathedral in horse-drawn carriages before the 7 p.m. ceremony. 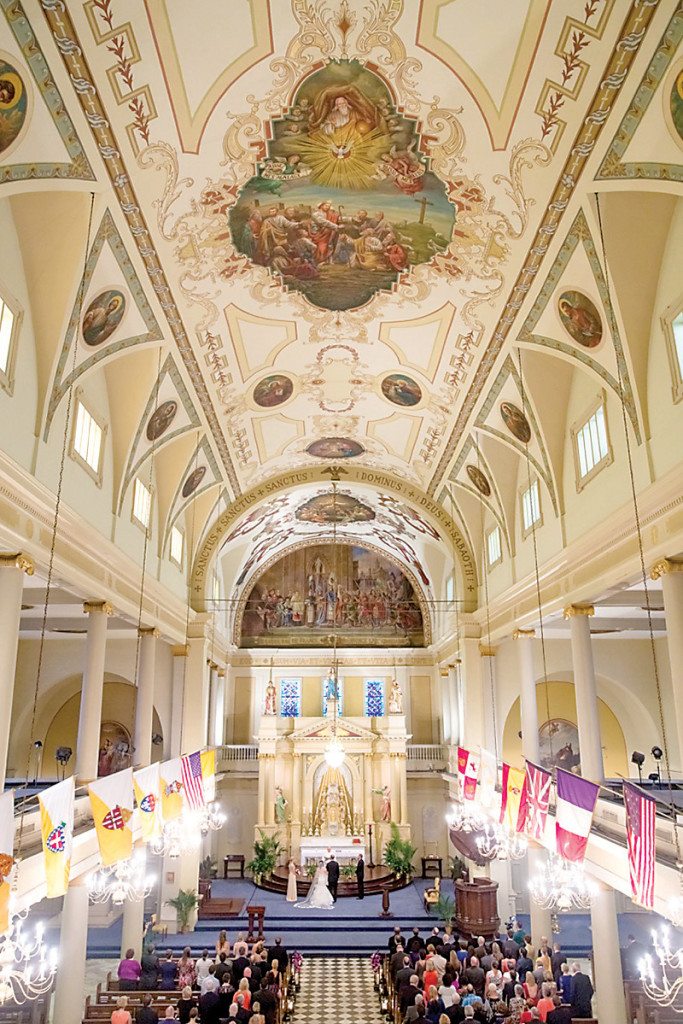 “We pulled up to the church and gathered (to) pray before the processional,” she said. “My father and I had always dreamed of the moment when he’d walk me down the aisle and even in our attempt to ‘feel the time’ – a favorite phrase my dad taught me – it felt like we were in a dream. I always thought I would be a nervous wreck standing at the altar in front of so many people, but once the moment arrived everything felt so right.”

After the ceremony, which was officiated by Todd’s step-uncle, Monsignor Henry Grieg, a brass band was waiting to lead the couple and their guests in a second line parade.

The second line is a Cajun tradition in which people celebrate by dancing down the street to music. Traditionally, the bride and groom lead the line and the participants wave handkerchiefs. The Ledets gave each of their guests a handkerchief with their new initials to wave during the parade and they each carried a hand-decorated umbrella as they led the line.

“Todd and I both look back on that as one of the most unique experiences in our lives thus far,” Megan said. “The second line ended when we arrived at The Riverview Room in JAX brewery on the Mississippi River, where the reception was held.”

Megan said their reception was a vision of light gold, champagne, deep purple and teal.

“I really wanted the flowers and décor to be special and luxurious and I trusted our wedding planner, Emily Sullivan, the owner of Get Polished Events, to bring our vision to life,” she said. “She exceeded my expectations by turning a blank canvas of a room into something out of a dream.

“One of our favorite parts of New Orleans is all of the quaint courtyards tucked away in the quarter. Our venue was on the fourth floor and therefore did not have a courtyard, rather it had multiple balconies. One of the balconies was turned into a courtyard, complete with greenery and a fountain, while the others had lounge furniture and upholstered tables.”

The newly christened Ledets enjoyed their first dance to “Signed, Sealed, Delivered,” before inviting the rest of their guests to join in on the reception fun. They spent the majority of their night on the dance floor before guests sent them off with LSU and Alabama-themed shakers. In true New Orleans fashion, an after party after the after party was hosted at a local bar and carried into the night.

“The attention to detail in the décor was spectacular,” Megan said. “Our wedding planner really worked with us to make sure every ‘i’ was dotted and ‘t’ crossed. The woman who did our paper products for the wedding was so creative; during our first meeting she took inspiration from the elements of New Orleans that we loved and worked that into our stationary, which had wrought iron (decoration) throughout that was drawn from various pictures I took of balconies and structures in the quarter.

“To be able to use New Orleans as the backdrop of the wedding made everything feel magical, and because most people came in from out of town, we were able to spend so much quality time together, particularly my bridesmaids and relatives.”

As their New Orleans dream wedding drew to a close, the Ledets traveled to the British Virgin Islands, where they spent time relaxing and decompressing at a private resort before returning to their home in Houston, where Megan now works at the The Menninger Clinic.

Have some exciting OTM NEWS? Submit YOUR NEWS
Tuesday, April 20, 2021