Coleman’s Cats, the children in teacher Andrea Coleman’s second grade classroom at Vestavia Hills Elementary School West, might take their nickname from felines, but their hearts belong to a four-legged black lab named for a legendary wizard at King Arthur’s court.

“On a scale of 1 to 100, I’d say he’s a 100,” one of those students, Reese Olvey, 7, said during a recent visit by Merlin, the school’s facility service dog and the only four-legged member of the faculty and staff.

There’s no doubt this Merlin is pure magic, as the youngsters in Coleman’s class eagerly wanted to interact with him when he visited their classroom. Taking turns in small groups, they clustered on the floor around him as Merlin patiently let the children pet him, then flopped onto his back for belly rubs.

“I think dogs can do powerful things we can’t as teachers,” Coleman said. When students are frustrated or are having a bad day, “Animals can help them (handle emotions) in a very different way.”

That Merlin is at school is the result of a long process that began four years ago when one of the school’s guidance counselors, Dawn Norris, attended a conference that had a session on school facility dogs and the benefits they can offer. After a lot of research, she put a proposal together, sought approval from Principal Kim Hauser and Superintendent Todd Freeman, and submitted an application to acquire one from Service Dogs of Alabama in Hope Hull.

Facility dogs are trained for intervention tasks and to work with multiple people, according to the nonprofit organization’s website, www.servicedogsalabama.org. The dogs are awarded to places such as schools, youth facilities and state agencies where stress is prevalent, including police and fire departments and departments managing crime or human trauma.

The school expected to receive a facility dog in 2023, but one became available earlier because another school that was supposed to have gotten him backed out of the program, Norris said.

In May, Norris and Emily Foster, a guidance counselor at Vestavia West and at Vestavia Hills Elementary School East, went to Hope Hull for a week of intensive training. After that was finished, Merlin came home with Norris and they reported back to school the next day.

That meant Merlin had only nine days to get acquainted with the kids at Vestavia West before classes ended for the summer. 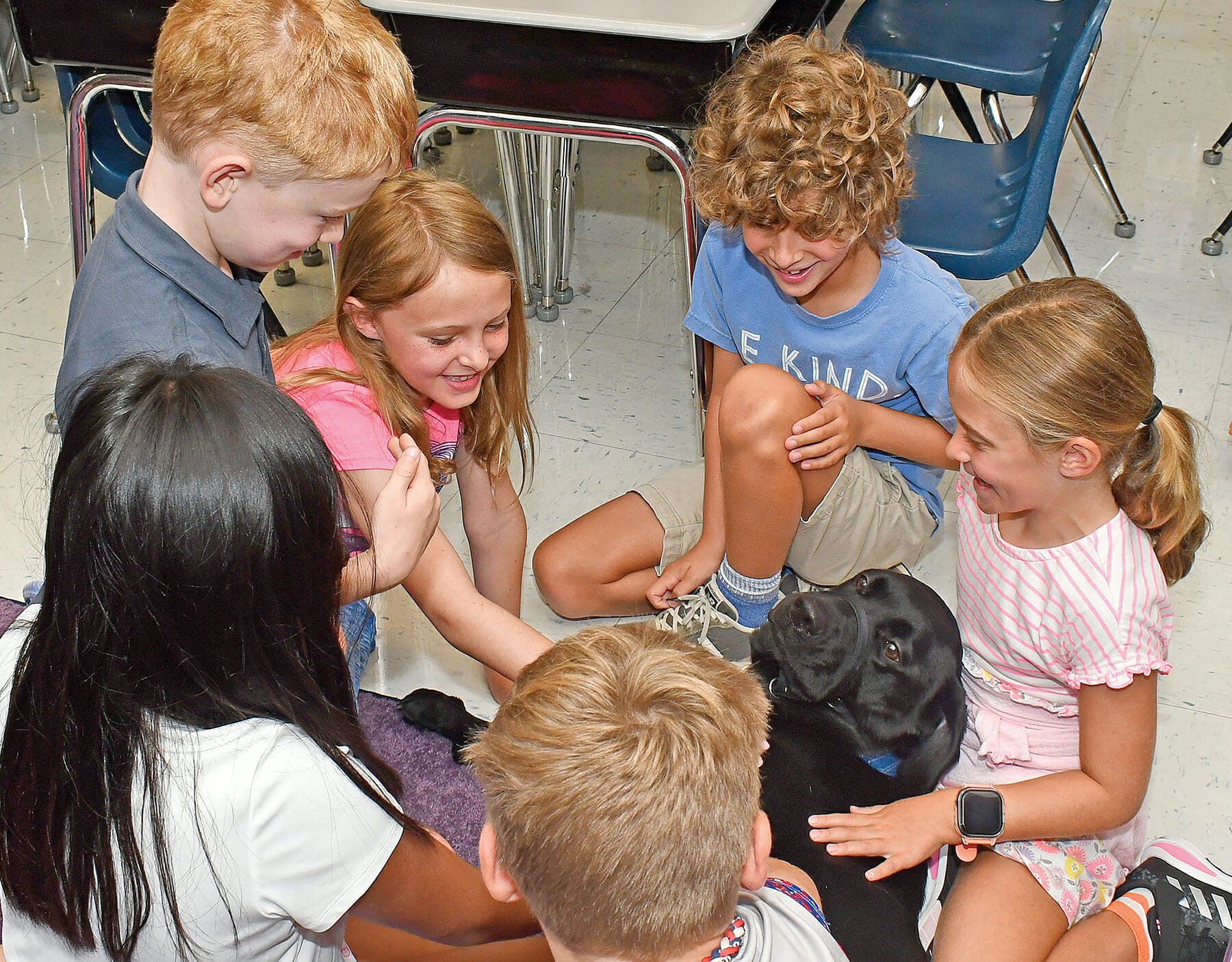 On that first day, to prevent the students from getting too excited and rushing at him, the teachers taught them what’s called the “Merlin wag,” by curling their fingers into the palm of a hand with the thumb up and shaking their hand back and forth, like a dog’s wag. The dog wags back – with his tail.

When Merlin left Coleman’s classroom after his recent visit, all the children raised their arms and performed the Merlin wag.

Merlin was back for the first day of school on Aug. 11 and he’s fitting in very well, the counselors said. He’s responsive to students, such as when a child was upset at leaving mom in carpool.

It can be emotionally hard for some children to get out of the car, but Merlin is there at 7:30 every morning as they arrive.

“Some of our toughest kids respond to him more than anybody else,” Foster said.

“The kids talk to him. Some even pull his ear up and talk to him. He fills a need humans can’t replicate,” Norris said.

And it’s not just the kids who love him. Teachers and staff like to pop into the guidance office where Merlin hangs out when he’s not working.

“They come in for a snuggle or a break,” Foster said. The women working in the school office think he hung the moon, Norris added.

“He’s increased morale for the children and all the adults in the building,” Hauser said, praising Norris and Foster for their commitment to bringing Merlin to Vestavia West. “I’m just thankful we have a counseling team that wants to go the extra mile for the children of our school.”

Merlin’s popularity extends into cyberspace, where he has more than 400 followers on Instagram, @magnificent.merlin.vhew.

While he has a water bowl and a soft rug to relax on in the guidance office, Merlin doesn’t eat or take potty breaks when he’s on duty. He’s been trained to do that in the morning before school and when he gets home, Foster said.

Home when he’s not on the job is usually shared with Norris or Foster. He gets along well with Norris’ own two dogs and her 13-year-old son. “The four of them have a good time,” she said.

Sometimes he goes home with the principal. This summer, for example, Hauser kept Merlin when Norris and Foster weren’t able to.

As for Merlin’s health care and grooming, two businesses in the community take care of that, Norris said. The Pet Wellness Center covers all his veterinary needs and flea and tick medication. And Happy Dog Grooming gives him a bath once a month.

“I really like dogs and he’s really cute,” she said.

Her classmate Ford Douglass, 8, described Merlin as a “fabulous dog because he would help people,” and Colton May, 7, agreed.

“He’s a sweet dog, he’s loving. I like having him around school,” Colton said.