You are here: Home / Blog / Saving the Homewood Pink House: Holley Ellis and Her Family Plan to Restore the House and Move In 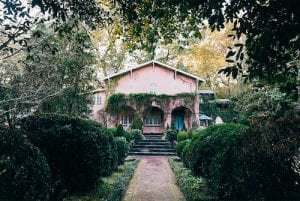 After more than a year of raising money and awareness to save the Homewood “Pink House,” the community can finally rest easy knowing the historic home is not being demolished.

Holley Ellis and her family bought the house and will be restoring it to its 1920s splendor. When the house is finished, they will move in and live in it.

Built in 1921, the house originally belonged to Georges and Eleanor Bridges. Its pink stucco resembles an Italian villa. Outside, a garden filled with native flora, statues and walkways surround the house.

After Eleanor’s death in 1987, Eric and Diana Hansen purchased the home in 1988. They sold it to developer Pat O’ Sullivan in 2004. Last year, he began working with the Homewood Planning Commission with plans to subdivide six lots on the property to accommodate five new houses.

The community thought the beloved, historic landmark would be gone forever, until Ellis announced on Facebook in September that her family was buying the house.

“We were looking for a home and fell in love with the house and its history.  The Bridges were very special people and did a lot for the city in terms of starting theaters, museums, teaching art and religion. They were an inspiration to read about,” she said.

“It truly just makes me happy to read and collect all of the information surrounding the house,” she said. “I’m enjoying preserving it. I want people to know about the Bridges and not to forget them.”

The house, located at 214 Edgewood Boulevard, is the perfect place for a family home, Ellis said. Members of her and her husband’s family live in Homewood, and she said she will stay connected to her roots here.

Those who want to see the historic home for themselves may have plenty of opportunities under the Ellis’ ownership. She said she plans to open the home to the public on We Love Homewood Day, which is an event typically held in May, and she plans to invite the public for the house’s 100th birthday in 2021.

Have some exciting OTM NEWS? Submit YOUR NEWS
Thursday, July 7, 2022