You are here: Home / Archives for AHSAA Soccer

By Rubin E. Grant Late Sunday afternoon, more than 24 hours after Homewood had claimed the Class 6A boys soccer championship, Patriots senior goalkeeper Ian Myers was still trying to grasp what they had accomplished. “It still hasn’t set in fully,” Myers said. Top-ranked Homewood scored two goals in a two-minute stretch late in the second half to seal a hard-fought 3-0 … END_OF_DOCUMENT_TOKEN_TO_BE_REPLACED 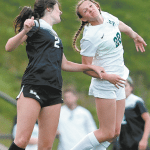 By Rubin E. Grant Listen to the stories of any fishermen or hunter and inevitably you will hear about the one that got away. The John Carroll Catholic girls soccer team can talk about something similar. After winning three consecutive state championships, one in Class 5A in 2014 and two in Class 6A in 2015 and 2016, the Cavaliers’ streak … END_OF_DOCUMENT_TOKEN_TO_BE_REPLACED

Have some exciting OTM NEWS? Submit YOUR NEWS
Tuesday, August 9, 2022