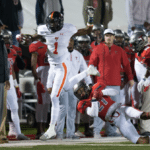 By Blake Ells Hoover cruised in its rematch with Thompson, earning a spot in the 7A state championship game at Bryant-Denny Stadium on Dec. 6. Larry McCammon rolled up 196 yards on 32 carries and had three touchdowns as the Bucs avenged their October loss when it counted most with a 31-12 victory. “You knew it was out there,” Hoover head coach Josh Niblett said of his … END_OF_DOCUMENT_TOKEN_TO_BE_REPLACED

By Lee Davis After its last title in 2009, the Spain Park girls golf team had found the state championship trophy to be as elusive as the Academy Award was for Bob Hope. The drought for the legendary entertainer never ended. But the Lady Jags’ drought came to an end May 17 at the Robert Trent Jones Grand National Golf Course in Opelika. Shooting a two-day round of 445, Spain … END_OF_DOCUMENT_TOKEN_TO_BE_REPLACED 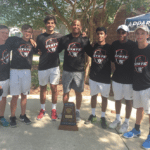 By Lee Davis The year 2008 was magical for Hoover baseball, as then-Bucs coach Rick Davis guided his team to its first state championship since old Berry High School turned the trick in 1981. In the decade that followed, Hoover struggled through a long period of post-season disappointment. But the proverbial worm finally turned last weekend. The Bucs swept two games from … END_OF_DOCUMENT_TOKEN_TO_BE_REPLACED