You are here: Home / Archives for Episcopal Diocese of Alabama 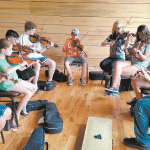 By June Mathews From its Native American beginnings, to its agricultural economy, to its role in the Civil War, Alabama’s cultural heritage runs diverse and deep. But through each element of its culture runs a common thread: the creative hearts and hands of Alabamians, manifested in the form of traditional folk arts. The Alabama Folk School at Camp McDowell, the camp … END_OF_DOCUMENT_TOKEN_TO_BE_REPLACED