You are here: Home / Archives for Golf

By Lee Davis After its last title in 2009, the Spain Park girls golf team had found the state championship trophy to be as elusive as the Academy Award was for Bob Hope. The drought for the legendary entertainer never ended. But the Lady Jags’ drought came to an end May 17 at the Robert Trent Jones Grand National Golf Course in Opelika. Shooting a two-day round of 445, Spain … END_OF_DOCUMENT_TOKEN_TO_BE_REPLACED

By Lee Davis Mountain Brook’s Ford Clegg had high expectations entering the Alabama High School Athletic Association’s Class 7A High School Boys Golf Championship last week. One thing he didn’t expect was to be his team’s drop score. On the first day of the two-round event at the Robert Trent Jones Grand National Course in Opelika, Clegg struggled to a 2-over-par 74. His … END_OF_DOCUMENT_TOKEN_TO_BE_REPLACED 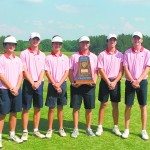 By Lee Davis One of Alabama’s perennial powers in high school golf reasserted itself and a potential new one arose at the Alabama High School Athletic Association’s Class 7A and Class 6A championships last week at Huntsville’s Hampton Cove course. In Class 7A, Spain Park earned its fourth title in five years. The Jaguars’ two-day total of 571 easily claimed the blue … END_OF_DOCUMENT_TOKEN_TO_BE_REPLACED