You are here: Home / Archives for Propst Arena 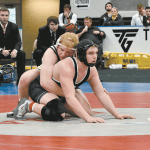 Thompson repeated as state wrestling champions last weekend by topping Hoover and Vestavia Hills at Propst Arena at the Von Braun Center in Huntsville. It was not the weekend Vestavia Hills’ wrestlers had hoped for. The Rebels did manage to claim one weight class; senior Pete Dazzio topped Thompson’s Ashunti Perry in the 170-pound championship by a 9-4 decision. Freshman Ryan … END_OF_DOCUMENT_TOKEN_TO_BE_REPLACED